Why I’m Bullish On This Beaten-Down Toy Company

Of all the basic tenets of modern financial theory, the Efficient Market Hypothesis (EMH) is one of the most controversial and disputed theories. For the uninitiated, the EMH posits that stock prices reflect all relevant price information, which means stocks always trade at fair value.

But if EMH were always true, investors would be wasting their time searching for undervalued stocks or stocks with potential to benefit from some market trend. It would also mean that no investor could outperform the market consistently. Sure, an investor might beat the market occasionally, but never on a consistent basis.

#-ad_banner-#Unfortunately, EMH fails on this point. You see, Warren Buffet has beaten the market consistently over long periods. And Buffet isn’t the only investor achieving these “impossible” results. There is a long list of investors who outperform market benchmarks consistently.

So while the hypothesis may not hold water, that doesn’t mean investors can’t benefit from EMH in a different way. You see, if a stock’s current price is based on all available known information, an investor could profit from front running future information about a company. In other words, identifying some future piece of information that isn’t currently priced into the stock. And this is the most commonly used tactic that investors with long histories of beating the market employ to find value in their selections.

This future information could be population trends or the belief that a stock will rise again after going through hard times — not necessarily caused by their own actions. It is this later reason why I’m bullish on the toy company Hasbro (Nasdaq: HAS). 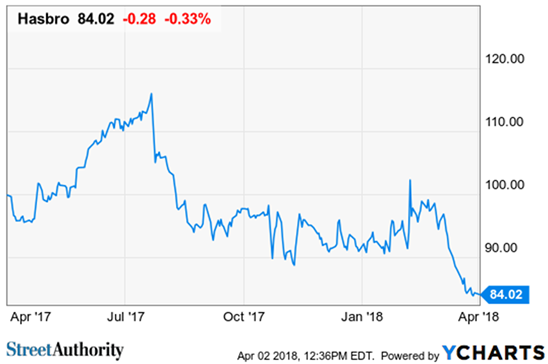 Hasbro has been punched in the gut over the past 12 months, losing 27.9% since hitting an intraday high of $116.20 in July 2017. Clearly, the main driver of Hasbro’s problems is Toys “R” Us. Toys “R” Us filed for Chapter 11 bankruptcy in September 2017, but with no ability to renogiate its debt, the company announced on March 15, 2018 the company would liquidate.

Of course, this liquidation will impact sales of Hasbro toys. After all, Toy “R” Us generated roughly 9% of Hasbro sales. But it’s critical to understand that, as big as Toys “R” Us was, it wasn’t Hasbro’s biggest customer. So much has been made of Toys’ liquidation that many investors have failed to see that Wal-Mart (NYSE: WMT) accounts for roughly 20% of Hasbro sales. And, if anything, that rate is only likely to increase from here.

Now, the loss of 9% of sales will hurt, don’t get me wrong. But those sales will eventually be made elsewhere through the company’s other retail partners — like Target (NYSE: TGT) and Amazon (Nasdaq: AMZN). After all, just because the supply of toys will decline with the shuttering of Toys “R” Us, you mustn’t assume the demand for toys will follow the same trajectory.

But that’s the assumption of too many investors. And it’s the reason the stock has been pushed lower since late last year. Now, that’s OK, because it gives prudent investors an opportunity to buy shares of Hasbro at a discount.

And why wouldn’t an investor buy shares of a growing company at a discount?  Hasbro grew its net revenues in 2017 to $5.2 billion — despite the problems at Toy “R” Us. That number is four times the industry average. The company’s operating profit margin was 15.6% — not stellar, but good for a toy maker and gaming company. The company generated $724 million in operating cash flow and ended the year with $1.58 billion in cash and cash equivalents. These are not the results of a company in deep trouble.

From a value standpoint, HAS is compelling. Thanks to the continued market beat down, HAS is currently trading about 15% to 20% below its intrinsic value. While that level isn’t considered a deep discount by most standards, it’s a great deal for a toy manufacturer.

But that’s not the only reason to consider shares of Hasbro.

The company has a long history of rewarding shareholders with dividends. Over the past 10 years, HAS increased its dividend payment by an average of 14% annually. And at current prices, the dividend is a healthy 3%. Now, the payout ratio could be better at 71%, but it’s not high enough to put the dividend in jeopardy — especially considering the amount of cash the company is generating from operations.

Now, it’s important to understand that Hasbro will continue to see higher than average volatility in 2018. It will take time to sort out the logistics of the Toys “R” Us liquidation. But for long-term investors, Hasbro has game.

Risks To Consider: Hasbro must work hard to shore up its retail customer outlets. Losing one of their largest customers will depress earnings for the next 2 – 3 quarters.  So expect to see greater than normal volatility for most of 2018. This volatility will decrease, as we get closer to the Holiday season. Of course, there exists the possibility that HAS is unable to replace the lost revenue from Toys “R” Us. In this case, the stock will continue its downward trajectory.

Action To Take: Buy shares of HAS up to $90. Mitigate risk by limiting your exposure to no more than 2-3% of your portfolio. Use a hard stop at $65 to protect your capital. This recommendation is a long term hold — so expect to hold this position for five or more years.

Click here to get their names and ticker symbols.