If I asked you what was going on in the markets in January 2017, I’d bet that most folks wouldn’t recall anything in particular that really stood out. After all, the S&P 500 was climbing to new highs on a near daily basis, and volatility was near all-time lows. Ho-hum.

In other events, you’d probably recall that it had only been a couple of months since President Trump’s surprise election, and that January was the month of his inauguration.

#-ad_banner-#But something else happened during that period. Something that can be used as a valuable investing lesson.

From Trump’s election in November 2016 to the end of January in 2017, the S&P 500 was up more than 9%. Nearly every stock was climbing… that is, except for two of my Top Stock Advisor holdings: 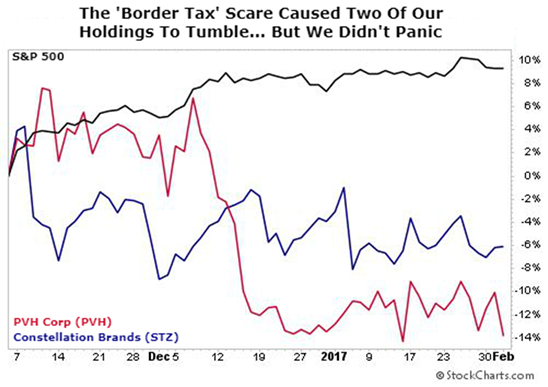 Perhaps seeing the names of these companies begins to spark some memories. In short, clothing retailer PVH (NYSE: PVH) and beverage company Constellation Brands (NYSE: STZ) were taking heat over the rhetoric of a possible “Border Tax” — a tax on goods made overseas and imported and sold in the United States.

At the time, there was a lot of concern regarding these two companies… and whether we should bail on them. But as I reminded my readers in a February 2017 update, “a simple check of why we invested in these companies in the first place can help remind us why we like these stocks.”

For PVH, sales, earnings and free cash flow were all on the rise, yet the stock was trading at levels — on a price-to-earnings basis — last seen in 2015. What we found was that we could buy the same great company for even less than what we got it for when we originally added it in February 2015. I recommended that we take advantage of the pullback and add more shares.

While most investors were panicking and selling the stock, we took advantage. And it paid off. The stock rallied roughly 60% over the next 12 months, greatly outpacing the S&P 500. 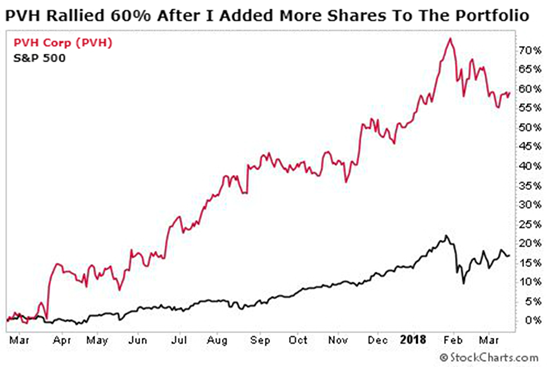 The story was similar for Constellation Brands, but over the next 12 months, the stock rebounded and we’re up more than 53% in less than 24 months, compared with the broader market’s 30% return over the same time period.

The Rebound You’ll Wish You’d Bought
Today, the setup is similar for social-media giant Facebook (Nasdaq: FB). The company has been in the spotlight ever since news broke last month that data-analytics firm Cambridge Analytica improperly used the private data of more than 87 million Facebook users.

That news, coupled with an overall market decline, shed more than $98 billion in market capitalization. Shares are down roughly 17% from their February highs.

This has triggered a flood of emails from readers wondering if it’s time to bail. But just as we did with PVH and STZ, let’s look at why we bought the stock in the first place and see if the story has changed…

When I originally added Facebook to the portfolio in June 2016, I liked the company for its massive engaged user base that gave it unparalleled advertising opportunities. At the time it had 1.65 billion users, generated $19.7 billion in annual revenue and more than $7.7 billion in annual free cash flow.

Today, despite the controversies surrounding the company, nothing has changed. In the company’s recent 10-k filing with the U.S. Securities and Exchange Commission, it had more than 2.1 billion monthly active users at the end of 2017 (a 27% growth since my original recommendation). Even if a million users deleted their accounts since then because of the controversy, Facebook’s user-base is still massive. And it’s unlikely that Facebook would have lost that many active users. Facebook is too big of a part of their daily lives to simply brush it off.

Looking at some other fundamentals, we can see that since my original recommendation Facebook has more than doubled revenue, from $19.7 billion to more than $40.65 billion in 2017. Annual net income has soared from $4.8 billion to $18.2 billion. And free cash flow jumped to $17.4 billion in 2017.

What’s more, the company has nearly $42 billion in cash and zero debt, and it’s trading at a P/E multiple of 26. In short, the story hasn’t changed. The fundamental thesis remains intact. And as long as a substantial number of users don’t delete their accounts, this is a company I want to hold onto.

FB Is Just One Of My Top Picks
Facebook remains a “buy” for me at current prices — a sentiment I passed on to my Top Stock Advisor readers this week. But it’s only one of the latest in a series of success stories my subscribers and I have been profiting from for years.

If you’re interested in cashing on gains like this FB rebound, and those of PVH and STZ mentioned above, check out the latest installment of my series of annual reports, the Top 10 Stocks for 2018.

This includes stock no.3, a company that’s returned 813% since 2008 — and is still going at 23% a year. Equally impressive is stock no. 5, which has grown same-store sales every year for 27 years, through every retail environment.

I’m not exaggerating when I say that these stocks are your best bet for building wealth in 2018 and beyond.

What’s more is that we’re offering this report for free. There’s absolutely no risk to you. All we ask is that you try a 90-day, no obligation trial membership the Top Stock Advisor newsletter just to see if you like it. Even if you don’t, you can keep the report as a free gift.