Why Disney Is The Undervalued Stock Your Portfolio Needs

Picking stocks in a bull market is so easy the GEICO caveman could do it. After all, when the broader market indices, like the S&P 500, trade at average price-to-earnings (P/E) and price-to-sales ratios (P/S) of 24.4 and 2.2, respectively, just about every stock in the index is rising.

#-ad_banner-#Of course, buying a market with such high multiples is fraught with danger. Both ratios are at extreme levels. In fact, the sales-to-price ratio is at its all-time high.

What’s An Investor To Do?
Investors really have two options to deal with an overpriced and volatile market. First is to sell their positions and move to interest-bearing securities. And while this may have worked in the past, moving money into bonds and preferred stock is actually more dangerous than the stock market right now.

It’s the opposite of what happened in 1983 when interest rates started falling. It fueled a bond rally that lasted more than three decades. But that rally created a fundamental problem. You see, when a rally lasts that long, investors start believing bonds are ultra-safe investments. But they aren’t. Bonds lose significant value as interest rates increase — especially higher-yielding bonds.

A Better Option
A second option for investors concerned with high valuations is moving money to stocks that pay dividends. After all, academic research is clear that dividend-paying stocks help ease the pain of market volatility.

But that doesn’t solve the problem of finding actionable dividend stocks in an overpriced market. Finding a dividend stock at or below fair value is a tough job, but that doesn’t mean those stocks aren’t available. In fact, investors need not look any further than The Walt Disney Company (NYSE: DIS). 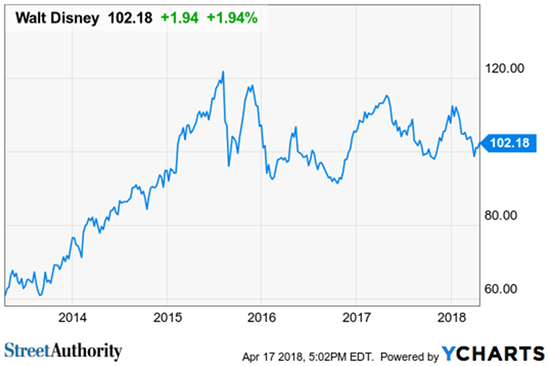 Any chart technician can look at the above chart and see that the company is struggling to break out of its 3+ year channel. But what’s interesting about the stock is what the chart doesn’t show.

The Math
You see, the stock is trading at just 13.1 times its fiscal 2019 earnings. And the last time the stock was this undervalued was way back in 2016. So what happened then? In just a few months, the stock rocketed up more than 26% by early 2017.

We’re likely to see another price spike again, but this time it will likely continue higher. That’s because analysts expect Disney’s earnings to rise by 21% this year to $6.89. By next year, earnings could rise another 20% to $8.49. Based on these numbers, if Disney stock returns to its average 16.5 times forward earnings estimate, the stock could hit $140 very soon.

Now, many analysts believe a return to 16.5 forward earnings for Disney stock is a bridge too far. I don’t think so. Here’s why…
Disney has an enterprise value (EV) of about $172 billion. The company’s trailing operating cash flow is $13.3 billion. Subtracting its capex spending, the company has $9.7 billion of free cash flow (FCF). Remember, FCF is the cash left over after paying the bills.

I think when Mr. Market realizes his mistake in valuing Disney stock, the 16.5 times forward earnings level won’t be so hard to accomplish.

That’s okay, because Disney will grow from its other two segments. Parks and Resorts own some of the most popular vacation and tourist destinations on the planet. More than 145 million people visited Disney’s attractions worldwide in 2017. In the same year, the parks segment saw an 8% increase in revenues to $18.4 billion.

This segment generated 33% of total revenues to the company and accounted for 26% of the company’s operating profits. Better yet, parks will likely match its 2017 growth numbers in 2018 — pushing revenues to approximately $19.8 billion and operating income to $4.1 billion.

But its biggest segment is media networks. And this is the engine to drive Disney higher. You see, last December Disney announced a bid for 21st Century Fox (Nasdaq: FOX) to be funded with Disney stock. The deal should close in late 2018 or early next year.

As it stands, the deal will give Disney control of 20th Century Fox Film Studio, 20th Century Fox Television, Cable Assets, Hulu, Sky, and 50% of Endemol Shine Group, the producer of hit shows such as Big Brother, The Biggest Loser, and Fear Factor.

Media Networks generated 42.6% of Disney revenues and 47% of its operating profits. And with the merger between Disney and Fox, this segment will do even better in 2019 and beyond. Best of all, the deal is almost immediately accretive to Disney’s bottom line.

In short, Disney is (finally) a buy!

Risks To Consider: The Disney-Fox merger isn’t a done deal yet. And that means there’s always the possibility that regulators could nix the deal in total or in part. If the deal is nixed by regulators, the company’s growth numbers will be lower — although not enough to dim Disney’s long-term thesis as an undervalued asset.

Action To Take: Buy shares of Disney up to $110. Mitigate your risk by applying no more than 3% of your portfolio into shares of DIS. This is a long-term investment, so expect to hold shares for five years or longer. Use a 25% trailing stop on your position.

Editor’s Note: There are exactly 10 buy-and-hold stocks that can double your market gains in 2018… just as they have for the past three years. Click here for the full report…