There are many investment strategies available for investors to find actionable stocks. And as you might expect, some are better than others. But there are two strategies that vie for the title of best strategy. And while the winner is undisputed, the debate still sparks strong opinion between investors and academics.

On the one hand, we have growth investing. Growth investing is a strategy whereby an investor seeks out companies with greater potential for capital appreciation. These companies rarely pay dividends. Instead, every dollar of profit goes back into the company in an attempt to generate even more profits.

#-ad_banner-#Paradoxically, growth stocks outperform most other strategies when the underlying economy is struggling. This is because during times of economic stagnation, interest rates are usually quite low — and growth companies need access to cheap capital. This explains why growth stocks have outperformed other strategies since the Great Recession.

On the other hand, value investors seek to find actionable stocks that are trading at a discount to their intrinsic value. These companies usually have mature business models looking to maintain strong pricing power and modest growth. And they typically pay dividends to reward shareholders. Interestingly, value stocks outperform other strategies when interest rates remain steady and the underlying economy is growing in real terms.

Which Strategy Is Best?
Bank of America (NYSE: BAC) conducted research to find the answer to this question. BAC looked at data over a 90-year period to determine the best performing strategy over the long-term. And the data was clear and unambiguous.

They determined that value stocks returned an average of 17% over the 90-year period compared to 12.6% for growth stocks.

Here’s why this research is very important today…

The United States has experienced tepid real growth since the Great Recession. But that’s finally starting to change. Economists see GDP growing at 3% annual rates for the next two years or so. And the Atlanta Fed’s tracker showing a 5.4% growth rate in the first quarter backs this up.

What this means is that value stocks are likely to outperform growth stocks once again, meaning investors need to begin adding stocks to their value that can grow as interest rates and inflation creep higher.

Of course, that’s easier said than done. That’s not to say there aren’t value stocks available for investors, however.

Lincoln National (NYSE: LNC) is one such stock. 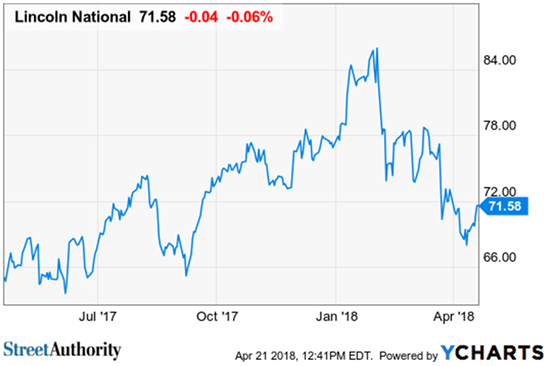 The Numbers
This Radnor, Pennsylvania-based provider of insurance and retirement products and services has a market cap of $15.6 billion. The company trades with a trailing price-earnings (P/E) ratio of just 7.8 — which roughly matches its forward rate (7.7) as well.

The company’s book value in 2017 increased 13% year-over-year (YOY ) to $64.62. Yet, the stock still trades at a 10% discount to its price-to-book (P/B) value. Now, normally a stock trades at a price below its book value when investors don’t believe the company’s assets will generate future profits and cash flows.

All in all, Lincoln National had a pretty good year.

Another popular method for determining value is the Graham Formula — also from Warren Buffet’s mentor. The revised formula for a Graham valuation is described below…

So let’s get a lot more conservative. Let’s normalize earnings, and instead of twice the growth rate in Graham’s formula, let’s just go with 1g. Then let’s use a risk free rate of 7% as opposed to Graham’s 8.5% assumed rate. I’ll keep the AAA corporate rate (Y) at today’s 3.89% rate for continuity.

Given these parameters, LNC is ‘conservatively’ valued at $130 — a discount of 45% to its current price. And that’s a conservative take that investors can trust.

Takeaway
The economy is heating up in real terms and inflation is moving higher. So growth stocks will no longer enjoy the tailwinds of low interest rates. Thus, the recent trend of growth stock supremacy over the past decade will slowly start to ebb.

And prudent investors will act accordingly.

Risks To Consider: Value stocks are frequently mistaken for value traps. A value trap is a stock that has lost favor with investors for legitimate reasons. These stocks rarely, if ever, return to their glory years, and as such, languish for decades at low valuations. While LNC doesn’t appear to be a value trap, the possibility never entirely goes away.

Action To Take: Buy shares of LNC up to $75/share. Mitigate risk by using no more than 3% of your portfolio to Lincoln National shares. Use a 25% trailing stop to protect your capital. Value stocks are notoriously slow movers, so expect to hold shares for the long-term.

Editor’s Note: Sustainable energy is not cheap. In fact, it’s the most expensive component in an electric car. But Tesla founder Elon Musk is determined not only to make it affordable worldwide… but to also get even wealthier from this “sunshine in a box” technology as it applies to your home. Folks who get in on this huge $1.3 trillion opportunity have the potential to profit 10X over…