Grab A Piece Of This Super-Steady Dividend Payer

This stock’s low price isn’t going to last forever — it’s time to get in while the getting’s good.

One of the main goals of my premium newsletter High-Yield Investing is stability. I like industries that don’t go through unpredictable hot and cold cycles. Student Transportation (NYSE: STB) is a textbook example.

Millions of kids must travel to and from school each day, rain or shine. With a national fleet of school buses and a stack of contracts with various school districts, the company generates consistent, recurring income to share with its stockholders. That, along with its current yield of 5.9%, is why STB remains one of my readers’ favorite stocks.

#-ad_banner-#My next recommendation enjoys similar stability thanks to another fact of life — babies.

I’m betting there will be another 4 million kids born this year. That’s about 11,000 per day — all of which will need a bed to sleep in. Today’s recommendation controls a big chunk of this lucrative market and turns that steady demand into a bountiful dividend yield nearly three times the market average.

But that wasn’t what first attracted my interest in this stock. It’s not something the company has that caught my eye — but rather something it doesn’t have.

A Breath Of Fresh Air For Rate-Weary Investors
Take a look at the chart below. 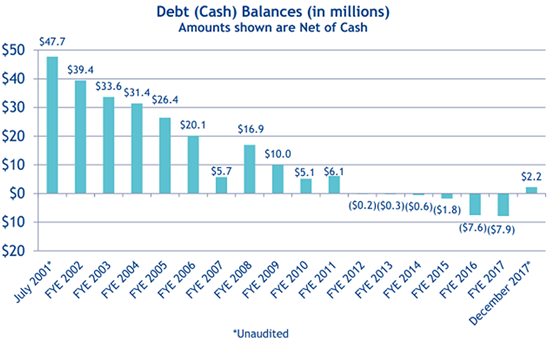 As you can see, the company carried $48 million in net debt on the books back in 2001. But over the next few years, it began systematically attacking that debt and whittling it down to $30 million, then $20 million, until finally in 2012, it held more cash than debt.

By the middle of 2017, the company was 100% debt-free and held $8 million in cash. In this era of debt-fueled growth and debt-financed stock buybacks, it’s rare to see a business that doesn’t owe a dollar to anyone. It simply has no creditors.

There are some current liabilities (payroll, accounts payable on inventory, etc.), but those are covered by current assets 5.5 times over. That means for every dollar due over the next 12 months, it has more than $5 in cash and marketable securities available, a healthy ratio. Beyond that, though, there is nothing due.

As you know, the U.S. Federal Reserve’s rate tightening has been a stiff headwind for income-oriented asset classes. But this pristine balance sheet isn’t affected. After all, higher borrowing costs aren’t a problem when you don’t have any borrowings to repay. Nor do stockholders have to be concerned with maturity schedules, restrictive debt covenants, and other such worrisome issues.

The fact is, an overleveraged balance sheet can doom a stock just as easily as falling profits. That’s why the market is leery of heavy borrowers right now — and why I gave this debt-free company the nod over several other high-yielders on my watch list.

You know how much my most recent recommendation spent on interest last year? Zero. No wonder it can afford to dish out abnormally large dividend distributions every quarter. A year ago, these payouts added up to a yield of 4% — not bad, but the bare minimum for inclusion in my portfolio.

But with the shares sliding, the stock is now throwing off a much stronger yield around 6%.

The Time To Buy Is Now
So why did the shares drop? Well, most of the damage came after a weak third-quarter report in which the bottom line was marred by several unusual events. One of those involved the bankruptcy of a major customer. It wasn’t named, but odds are good they were talking about Toys ‘R’ Us.

There is currently an effort underway by a billionaire businesses man to save the embattled toy retail empire, which accounts for 18% of the industry. But even if it fails, these sales won’t just disappear — they will be hungrily fought over and devoured by competitors such as Wal-Mart (NYSE: WMT) and Target (NYSE: TGT).

Maybe that’s why analysts aren’t expecting this sales slump to last long — and why Wall Street has a price target on the stock that’s about 50% higher than where it closed recently. After all, revenues are projected to increase 18% next year to $79 million — which would mark a new record high. More important, earnings are forecast to more than double.

All that, combined with a rock-solid balance sheet, make it a safe bet that this stock will return to its former glory. In the meantime, you can grab a piece of this steady dividend payer for a little more than $5 per share.

Finding stocks like this latest pick — smaller, relatively unknown, with absolutely zero long-term debt, and a high yield to boot — are practically unheard of in this market environment. But make no mistake, these are exactly the kinds of picks income investors should be looking for right now.

Unfortunately, telling you the name of this stock here wouldn’t be fair to my High-Yield Investing subscribers. But there’s a way you can get the name and ticker symbol of this pick today.

Join us in our search for the best high yields the market has to offer by trying High-Yield Investing. You don’t have to settle for the paltry yields offered by most stocks. The high yields are still out there. You just have to know where to look — and my staff and I are here to help you along.

Click here to unlock today’s pick and see how High-Yield Investing can help you pull in 11.2% a year in dividends — and some impressive capital gains to boot.