Play Defense With This Value-Priced Utility

I read a lot of research. It’s my job. I don’t mind. Comes with the territory. Most of it just involves gathering data and checking the pulse of what’s going on.

There are only a handful of analysts, though, whose work I follow consistently. One of those is Stifel Nicolaus equity strategist Barry Bannister.

#-ad_banner-#Bannister predicted the violent pullback the market enjoyed in February, and, in a recent report, the outlook is rather gloomy. “Our models for the S&P 500 point to minimal price upside in 2018 and a bear market (-20%) in the coming year,” Bannister writes. “What matters for investors,” he continues. “is that any decline is likely to be unusually rapid…”

The culprit, according to the analyst, was and will be the Fed and other central banks around the world. Bannister believes that central bankers are tightening monetary policy too aggressively and markets are reacting negatively to the action. He recommends that investors start moving to more defensive positions in consumer staples and utility stocks.

His timing may be dead on. This chart is a good indicator. 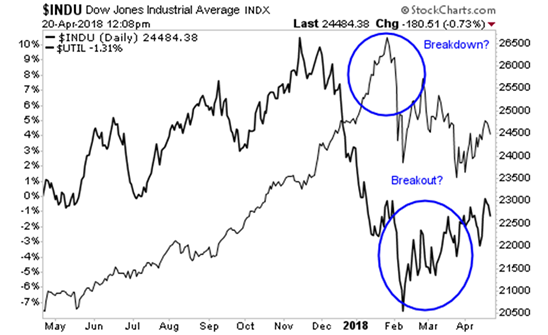 The thin line is the Dow Jones Industrial Average with the thicker line representing the Dow Utilities. It’s almost an exact opposite. As the broader market dropped sharply in February, interest in utility stocks had an extremely bullish move, rising nearly 6%. That would indicate equity investors becoming skeptical of the health of the bull market and taking a more defensive stance.

If this is, indeed, the case, investors have a handful of high quality names at attractive prices to choose from. One that has popped up on my radar is PPL Corporation (NYSE: PPL).

Headquartered in Allentown, PA, the heart of the Rust Belt, the former Pennsylvania Power and Light has grown to much more than just a power generator for the Alleghanies. Let’s just hit the highlights.
—    $7.4 billion in annual revenue
—    Over 10 million utility customers in the U.S. AND U.K.
—    8,000 megawatts of regulated generation capacity in the U.S.
—    218,000 miles of electrical lines
—    142 billion kilowatt hours of electricity delivered
The company’s U.S. footprint includes regulated electricity delivery to customers in Pennsylvania, Kentucky, Virginia, and Tennessee as well as natural gas distribution in Kentucky. The company’s British arm, Western Power Distribution covers 7.8 million customers in the central and southwestern party of Britain and is one of the country’s leading developers in smart grid technology.

Drilling down, PPL’s numbers are as impressive as its footprint. The company pulled in $7.44 billion in revenue for 2017. The 2018 forecast calls for $7.63 billion with 2019 climbing to $8 billion. The growth translation would be knocking on 4% annually if the company can execute.

All of the encouraging metrics are necessary for PPL to continue to pay its annual dividend which currently stands at $1.64 per share. Year over year, the company grew its quarterly distribution by 4% from 39.5 cents a share to 41 cents. Looking at the numbers going forward, this is doable.

As management continues to perform well internally, some external factors could also propel PPL’s numbers. The company’s footprint, coal and steel country, became a focal point of the 2016 elections for economic redevelopment. Signs of this shift can already be seen with the current tech renaissance in Pittsburgh. It’s still early in the ballgame, though for the rest of the region.

Risks To Consider: The biggest risk to investing in any utility stock is, of course, interest rates. With the Federal Reserve in hawk mode, rates are more likely to rise. Typically, this will put pressure on utility stocks due to the reliance utilities have on debt financing. However, judging by the Dow Utilities chart, Fed increases may already be baked into the cake. Time will tell.

Action To Take: At $27.92, PPL shares currently trade at a 31% discount to their 52-week high. With a forward PE of 12.85, much lower than some of the company’s peers, and a fat dividend yield of 5.86%, the stock is an attractive bargain for nervous investors looking to play defense in an uncertain market environment. Modest expansion of the PE from 12 to 14, still a discount relative to the peer group, would result in a 16% upside. Including dividends, investors would enjoy total returns of 22% over a 12 to 18-month period.