Are AT&T Shares Worth The Risk?

If there’s any company struggling more with recent bad publicity than Tesla (Nasdaq: TSLA), that company would have to be AT&T (NYSE: T). The company just can’t seem to get out of its own way.

Take the ongoing merger with Time Warner (Nasdaq: TWX). AT&T management believes the deal will reinforce the Direct TV purchase, which cost AT&T $67 billion. But the $85 billion price tag for TWX, including an additional $50 billion of debt, seems a bridge too far. On top of that, the company is facing stiff resistance from the Department of Justice’s Antitrust Division.

#-ad_banner-#Now, it’s no surprise that the deal would face regulatory resistance. What is a surprise is why a large-cap company with the vast resources of AT&T would hire a law firm with no actual experience in handling antitrust law. Instead, they hired Daniel Petrocelli, a defense attorney best known for winning a wrongful death suit against O.J. Simpson.

And while it’s possible Petrocelli could win, it’s definitely an uphill battle for an inexperienced team to go against a DOJ team with antitrust experience spanning several decades.

Then there’s the revelation that AT&T paid $600,000 to Trump lawyer Michael Cohen. Ostensibly, the payment was for “insights” into the administration of Donald Trump — whatever that means. But while the payment raises questions about the actions of AT&T management, the payment doesn’t appear to be illegal, and therefore, will cause no lasting harm to the company. It’s just another PR disaster for a company moving aimlessly.

A Real Threat
The biggest threat to AT&T is the growing trend of cord-cutting losses at Direct TV. While the 2015 deal looked good on paper, the deal closed about the same time as the cord-cutting trend first gained traction nationwide. Sadly, it appears AT&T management didn’t see the secular trend coming.

Since then, AT&T has seen its Direct TV subscriber base decrease. Now, it’s true that some of these losses have been partially offset by gains in the company’s newest streaming version of Direct TV called DirectTV NOW. But the revenue differences between the two services are significant, meaning top line entertainment revenues are likely to continue shrinking for another few years.

AT&T Remains An Attractive Buy
Despite the mostly self-inflicted headwinds, AT&T makes for a compelling buy. 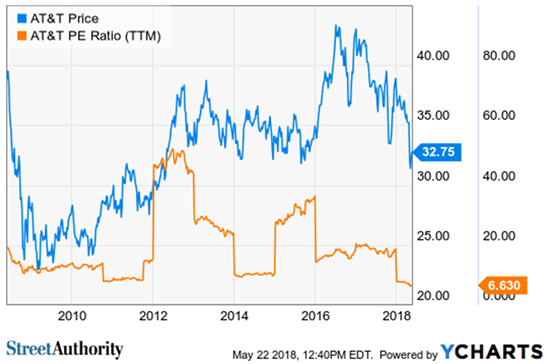 As you can see from the chart above, the stock is at the lower end of a channel dating back to 2012. At this level, support is strong, meaning a break below $30 is unlikely.

The stock trades at a price-earnings (P/E) ratio of 6.6 — the lowest level in a decade. Of course, the stock’s recent malaise is directly attributable to management’s mishandling of the Time Warner and Direct TV deals.

Still, AT&T makes for an attractive investment. Sure, it might be a better investment if the Time Warner were to be nixed by the judge deciding the case next month. That’s because pay TV is shrinking, and very little of the Time Warner deal will do anything to change that. At best, the deal provides the company a hedge of sorts against subscriber losses with the newfound ability to charge its competitors for programming.

Don’t Forget 5G
But AT&T’s entertainment division isn’t the only profit center for the company. AT&T and rival Verizon (NYSE: VZ) are leading the way for significant 5G rollouts in late 2018 and 2019. This is a big deal.

You see, networks using 5G technology are capable of delivering speed up to 10 times faster than 4G speeds. So a full HD movie taking about an hour to download on a 4G network will take just seconds on a 5G network. What this means is that the long-awaited promises of virtual reality, autonomous cars, and IoT (Internet of Things) will soon become a reality. 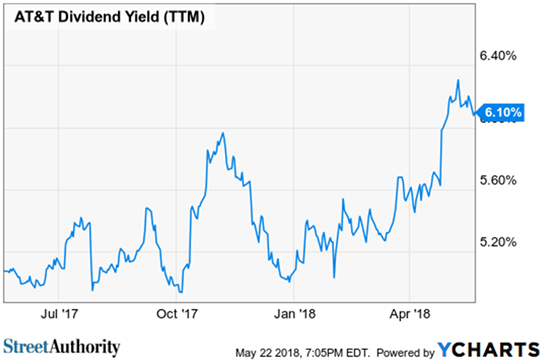 Any discussion of AT&T must eventually get around to the company’s 6% dividend. But to be fair, we have to look at the dividend in light of the Time Warner deal. You see, should the deal be approved, the question becomes an issue of dividend sustainability in light of the amount of debt service the company takes on to fund the deal.

Given the vast size of TWX’s TV and movie content, AT&T will have a trove of valuable content to sell through its various streaming services. Offsetting some of this revenue will be interest payments to finance the $50 billion needed to buy Time Warner. At current rates, the deal will require about $2 billion annually in interest payments.

On the other hand, TWX will generate $4.2 billion free cash flow this year. Adding this to AT&T’s $18.3 billion in free cash flow, the combined company will have more than enough available cash to continue growing its $3 billion dividend.

And should the judge nix the TWX deal, AT&T’s payout ratio of 42% ensures continued growth of the dividend through its regular operations.

At the end of the day, AT&T management has made some poor decisions in recent years. But the company is on solid footing — making the 6% dividend attractive for investors looking for income.

Risks To Consider: The Time Warner decision from Federal Judge Richard Leon is expected no later than June 12, 2018. Whether the judges decides for or against the deal, expect increased volatility for AT&T shares. But regardless of the decision, the investment thesis surrounding the stock is bullish.

Action To Take:  Buy shares up to $34/share. Mitigate your risk by applying no more than 3% of your portfolio into shares of T. This recommendation is for investors with a medium to long-term time horizon, so expect to hold shares for five years or longer. Use a 25% trailing stop on your position.

Editor’s Note: Put an extra $23,000 in your pocket every year…
There’s a simple investing system that regular investors are using to collect extra paychecks every month… totaling as much as $23,000 per year. It’s called The Dividend Trifecta, and they are telling us that this $23,000 number is the real thing. They don’t have special resources or connections… they just have The Dividend Trifecta… and 10 spare minutes a month to use it. Now it’s your turn: click here to learn how it works.