Why Deutsche Bank Is A Value Trap, Not A Value Stock

Value investors face a myriad of obstacles in the hunt for value stocks. These obstacles range from which valuation metric to use in finding stocks trading below their fair value to finding a catalyst that will propel an oversold stock higher.

One of the best examples of a value trap is Deutsche Bank (NYSE: DB). In a nutshell, Deutsche Bank is the leading global bank at destroying shareholder value. The chart below illustrates this fact. 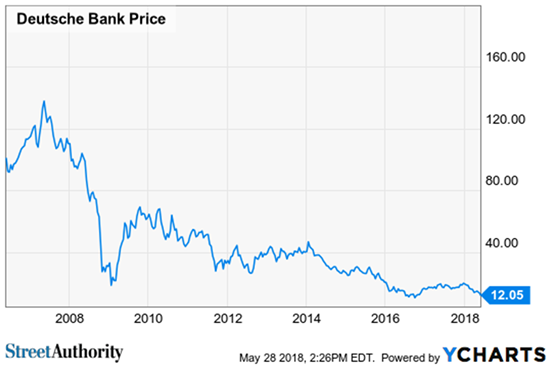 As you can see, Deutsche Bank shares have plummeted by roughly 92% since May 2007. And with shares trading at this level, some investors might be tempted to mistake DB as a value stock.

That’s because by most valuation metrics, the stock appears undervalued. Take one of the best metrics for valuing bank stocks, the price-to-book ratio. This ratio measures the price of a stock compared to tangible assets on its balance sheet.

A company’s price-to-free cash flow (P/FCF) ratio is another popular valuation ratio among value investors. It’s a better measure than a price-to-earnings ratio because it relies on the statement of cash flows. This makes it less susceptible to accounting manipulation. Deutsche Bank trades at a miniscule 0.78 P/FCF ratio. Again, this appears to be a stellar result, because the average P/FCF ratio for companies in the S&P 500 is 14.05. So by this measurement, DB is trading at a 94% discount to the S&P 500 average. Now, comparing DB shares against the S&P 500 index isn’t really fair. So let’s just look at Deutsche Bank’s P/FCF to its own historic average of 1.77. Using this number, DB shares are trading at a 56% discount to its own average.

But, make no mistake, Deutsche Bank is no value stock — by any stretch of your imagination.

Existential Crisis?
A brief look at the company’s latest quarterly results indicates a company completely incapable of solving its decades-long decline. The numbers are truly awful.

The company reported net revenues of €6.9 billion ($8.1 billion). That’s a 5% decline in the first quarter against the year ago period. Unfortunately, the bank’s net interest income isn’t the only thing that declined.  The company reported that its non-interest income also fell by 5%. And this one hurts because non-interest revenues generate more than 60% of the bank’s net revenues.

The company reported its pre-tax profitability declined 51% to €432 million ($502 million). Deutsche also said its pre-tax margin fell to 6.2%. This atrocious margin compares to average pre-tax margins of more than 30% for large U.S. banks. And just as incredibly, the bank has an efficiency ratio of 92.6%. This ratio measures a bank’s overhead as a percentage of its revenue and indicates a bank so inefficient it’s bordering on an existential crisis. In case you’re wondering, most U.S. banks operate with an efficiency ratio of around 60%, while one of the most efficient large European bank, Lloyds (NYSE: LYG), operates with an incredible 45% efficiency ratio.

In short, Deutsche Bank continues to experience declining revenues and margins and rising costs. In every major financial category, the company is heading in the wrong direction. And for investors thinking the stock makes for a good value, there remains no catalyst to turn the company around.
The bank’s core markets are structurally less profitable for commercial and retail banking. And it lacks significant exposure to more profitable markets in the U.S. and the UK.  The bank has no moat or any ability to establish any competitive advantage in its core business. In fact, it’s so bad, Kim Hammonds, the former COO of Deutsche Bank, called it “the most dysfunctional company” for which she has ever worked.

Takeaway
Despite losing 92% of its value over the past decade or so, the bank still seems overvalued. In essence, Deutsche Bank is virtually uninvestable to any but the most speculative investors. The company simply has no capacity to compete with other large U.S. or European banks — making this a stock to avoid at all costs.

Editor’s Note: “$859.13… $494.54… $708.71… “
Imagine walking out to your mailbox and seeing a string of checks like these. These are real amounts that Judith M. of McHenry, Illinois, has been cashing. She doesn’t work an extra job for them. In fact, she only puts in about 10 minutes a month. And these checks keep rolling in, month after month, year after year. Once you start, you’ll see the checks starting to fill your own mailbox. Click here to learn how.