We Could Make 52% From Cisco In 7 Months Or Less

I remember buying a 56k modem in 1996 and thinking that my life had just been changed. I could download a high-res photo in about 10 to 20 seconds, and boy! It was that amazing.

Oh, how things have changed…

#-ad_banner-#The internet of things (i.e. smart TVs, “Ring” devices, connected cars, etc.), mobile phones and nearly everything operating from the cloud all need lots of bandwidth. This means that we need to have unbelievably fast internet — both wired and wireless — for our homes and devices.

As we break free of cords and stodgy cell phone plans, the wireless component is becoming even more critical, and only a handful of companies are going to take part in the next generation of wireless, called 5G.

The Backbone Of The Digital World
5G is the latest generation of wireless protocols that promises a 10-fold increase in speed compared to 4G LTE, which is what most of your phones and devices run on now. It will be fully backward compatible with old generations, meaning that older devices can hook up to it without issue.

As the world becomes mobile, the need for a bigger information pipeline (network) is critical and 5G will help solve the issues of bottlenecks, over-demanding consumers and the proliferation of connected devices crippling current networks.

Cisco (Nasdaq: CSCO) will play an integral part in this 5G rollout (expected to be underway in 2020) and is already profiting from it. The company has developed hardware, software and alternative methods that allow cell phone companies, and network providers to alleviate their bandwidth issues now, and take advantage of 5G speeds without upgrading again.

In other words, Cisco can immediately solve a plethora of network issues and offer companies about 85% of what 5G will give them…

Cisco is doing this by changing a large part of its business, moving from traditional hardware to more cloud and a subscription-based system. This will allow both Cisco and its customers to be increasingly agile as needs shift and grow. The change should breathe new life into this stable, seasoned tech blue chip.

Goldman Sachs believes that 2018 is a key transition year for the company… one that should be very profitable. Goldman — along with the vast majority of analysts — see new, multi-year highs in the stock. Currently, the consensus target is near $49, with Goldman’s target set at $54.

And even though the stock has already seen big gains in 2018 (shares are up 14% year to date, and that’s after a recent selloff), it still trades at just over 16 times forward earnings — much cheaper than Nasdaq’s 100 forward P/E of 20.4.

Cisco’s business isn’t a simple one, which I believe makes it harder for some to invest in its stock. That said, I also believe that media coverage of 5G developments will help bolster CSCO’s recognition and contribute to momentum.

The way I see it, Cisco is due for some time in the spotlight and, over the next year, should see not only increased visibility but continued earnings growth as it transitions into its new business model.

I see shares getting back to and breaking out of their 52-week high of $46.37. Shares moved a little lower after the most recent earnings report — not because it was bad, but because expectations were very high.

Those expectations have now been tempered, and far more analysts have upped their estimates than reduced them.

The company also yields a strong dividend that will help keep investors on board even if markets get choppy. 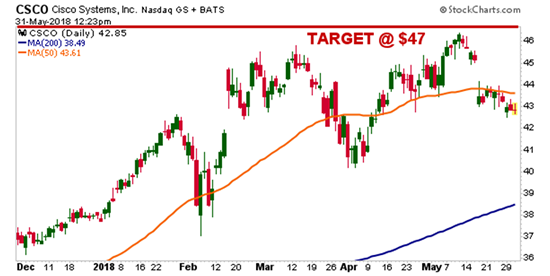 Sounds crazy right? It isn’t — Wall Street uses the same strategy every day. If this still sounds risky to you, maybe because you’re new to options trading, know that this trade breaks even if CSCO hits $44.60. That’s just about 4.4% above recent prices, a move easily supported by this company’s rosy outlook.

I’m talking about returns of 31%, 35%, and more — all in a matter of weeks rather than months or years. And sometimes our trades work even faster. In fact, we just closed a trade on Southwest Airlines for 20.7% in just 2 days.