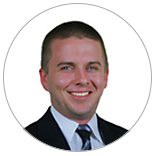 Warren Buffett and vice-chairman Charlie Munger sat down for an extensive Q&A session this weekend at the Berkshire Hathaway shareholder meeting.

The event was different in many ways this year. It was held in L.A., for example, rather than the usual setting in Omaha.

The two nonagenarians were especially candid, offering explanations on matters ranging from their exiting of positions in the major airlines (at arguably the worst possible time) to tax policy, cryptocurrency, and more.

Also, in an amusing turn of events, Charlie Munger let slip the name of Buffett’s hand-picked successor. “Greg will keep the culture,” Munger said when referring to Berkshire’s management structure and its ability to outlive both he and Buffett. (CNBC later confirmed this with Buffett.)

We may devote some space to covering Buffett and Munger’s more quotable thoughts from the meeting in a later issue. But for now, I want to share with you my favorite moment – along with my thoughts. And later on, I’m going to hand things over to my colleague Nathan Slaughter, who will discuss one thing that will definitely outlast Buffett. I’m talking about the principles that he has freely shared with investors on what it takes to be successful in the market. And it just may be his greatest legacy…

As I mentioned, one of my favorite moments came from Munger, who brought out the big guns to bash bitcoin:

“I hate the bitcoin success. I don’t welcome a currency that’s so useful to kidnappers and extortionists and so forth. Nor do I like just shuffling out a few extra billions and billions and billions of dollars to somebody who just invented a new financial product out of thin air. I should say modestly that I think the whole development is disgusting and contrary to the interest of civilization. I’ll leave the criticism to others.”

Tell us what you really think, Charlie.

While I don’t disagree with much of what he said here, I also (respectfully) feel like there are some elements to the cryptocurrency space that Munger and Buffett simply don’t understand.

For example, I have yet to see any quotes from either Buffett or Munger addressing the potential applications made possible by cryptocurrencies, such as decentralized finance (DeFi), that could be legitimate gamechangers.

It seems the market may be catching on, too. Back on April 14th, I wrote about the appeal of the Ethereum platform. In our opinion, as the one platform with the most practicality and use cases, it’s where you want to be if you’re going to venture into this space. And since then, we’ve seen even more decentralized apps, more NFTs make their debut, and more headlines.

ETH is up a staggering 40% since then, by the way – but that’s only a fraction of its total gain over the past year. 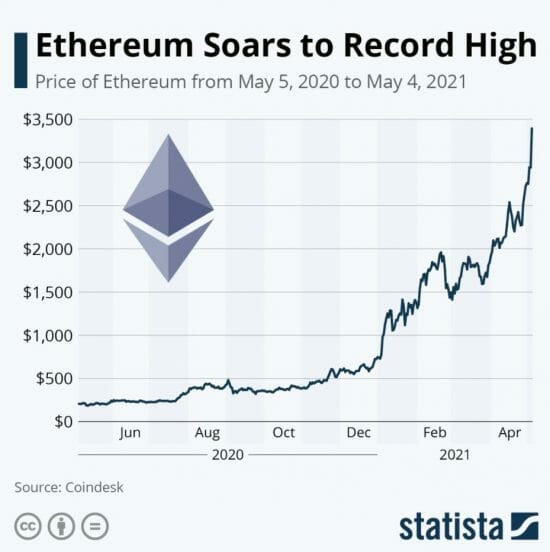 Getting Buffett and Munger to weigh in on bitcoin doesn’t really serve much of a purpose other than generating headlines, if you ask me. I personally would like to know what they think about ETH. Is it a flash in the pan? Or is it the real deal? And what about the applications?

I’m not holding my breath, and the truth is, only time will tell either way. In the meantime, ETH is quickly gaining ground on bitcoin in terms of market cap… 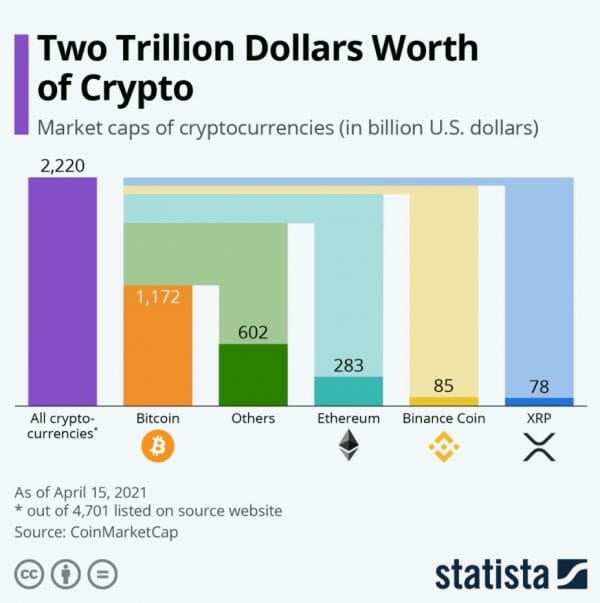 Again, I have to give credit where it’s due here. My colleague Jimmy Butts and his team made their call on ETH back in January as a part of their list of “shocking” investment predictions for 2021…

Jimmy predicted that the big cryptocurrency winner of 2021 would be Ethereum – eventually passing bitcoin in popularity. While ETH may not overtake bitcoin this year, if you followed Jimmy’s call, you’d be up over 300% on this prediction alone…

6 Characteristics Of A Buffett Stock Pick

The internet is filled with articles (some better than others) that encapsulate Warren Buffett’s guiding investment principles. In fact, entire books have been written on the subject.

Let’s be honest. Reading them probably won’t turn you into a stock market wizard overnight. Knowing Buffett’s methodology is one thing – utilizing it successfully is a different matter.

But even professional ballplayers still spend time perfecting their mechanics in a batting cage. Being a great investor requires similar dedication. You might not become the next Warren Buffett, but you can still learn (and apply) his accumulated wisdom. After all, if you want to outslug the market, I can think of no better investor to emulate.

While it is difficult to draw up a formulaic investing approach based on Buffett’s past stock selections alone, his comments and actions have yielded some very valuable insights. And by further analyzing the commonalities within Berkshire’s portfolio, we can reverse engineer to determine the prized traits that Buffett searches for in a prospective investment.

So strap in as we do just that. Take some time to read this, re-read it, print it out and tape it on the wall in your office next to your computer (or wherever you trade).

Most of Buffett’s biggest winners share some (if not all) of these characteristics. 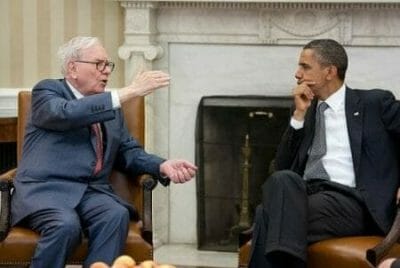 1. Straightforward Business Models – Buffett has always gravitated to easily understood companies with recognizable brands and shied away from those that he feels are beyond his depth. If you can’t define a business and explain how it generates revenue in a few words, then it might be difficult to estimate its intrinsic value or spot emerging threats.

Berkshire owns companies that make everyday products such as candy, soft drinks, and razors – not satellite missile defense systems. This guideline may limit potential opportunities, but it can also keep you from straying beyond your circle of competence and getting into trouble.

2. Proven Managerial Expertise – A business is only as good as the executives calling all the shots. Some are far more astute than others and can be trusted to maximize long-term shareholder value, while candidly admitting to mistakes.

Take a few minutes to ask important questions. Does the stock have relatively high insider ownership? Are management’s incentives aligned with the interests of rank and file shareholders? Has the company made rational decisions with retained earnings or is it more interested in meeting arbitrary short-term earnings targets to appease Wall Street analysts?

Buffett places a great deal of importance on trustworthy management teams and usually keeps them intact after an acquisition.

3. Healthy Balance Sheets and Strong Returns-on-Equity – The best managers squeeze more profit out of every dollar at their disposal, which makes this tenant a direct reflection of the previous one. Buffett is a well-known advocate of return-on-equity (ROE), which gauges how efficiently a company is using the equity capital on hand to generate profit. Generally speaking, look for businesses with ROE north of 15%.

A close companion metric is return on invested capital (RoIC), which takes borrowing into account. On that note, Buffett typically avoids companies that rely too heavily on debt to expand. Over-leveraged businesses carry more risk, particularly in economic downturns.

4. Sustainable Economic Moats – This is perhaps the most important requirement. Buffett won’t invest a penny in a business that lacks a defensible economic moat. In medieval days, wide moats encircling a castle would help protect the inhabitants from marauding invaders. Today, the same concept applies to businesses with defensive fortifications to help prevent encroachment.

Any profitable business making boatloads of cash is bound to attract hordes of imitators. That’s particularly true of trendsetters with novel new ideas and disruptive products. Innovators may prosper for a while. But success always invites competition, which inevitably erodes profits and drives down industry returns toward the cost of capital.

Only businesses encircled by defensive moats can fend off competition, generate sustainable excess returns and create real lasting value for shareholders. The wider and deeper the moat, the better protected the company. Buffett prefers them to be nearly “unbreachable.” You’ll find economic moats surrounding all of the world’s greatest, most profitable businesses… Facebook, Visa, Coca-Cola, Wal-Mart, and more.

As the name implies, owner earnings are what’s left over for stockholders after all the bills have been paid in full. This pool (which can be substantially more or less than standard GAAP earnings) can be tapped for dividends and stock buybacks or retained for future acquisitions and expansion projects.

While capital requirements vary from industry to industry, look for companies that can convert more of their revenues to FCF than their peers. As a corollary, it’s often wise to steer clear of companies with cloudy or unpredictable cash flow forecasts.

6. Attractive Valuation and Measurable Margin of Safety – Perhaps more than anything else, Buffett’s remarkable success can be traced back to one core tenet: finding undervalued stocks trading for less than their intrinsic value.

Heavily influenced by Ben Graham, Buffett scrutinizes balance sheet assets and liabilities and has a keen eye for pricing disconnects. The wider the discount between market price and a stock’s true value, the larger the margin of safety.

Keep in mind, a $50 stock might only be trading at $30 because the company is facing some short-term operating challenges or macro headwinds. So value investing usually requires patience and a long-term perspective – and a willingness to go against the crowd.

But you can’t argue with the results.

Stocks like that meet these criteria don’t exactly grow on trees – which is why Buffett has a very concentrated portfolio. Historically, about three-fourths of Berkshire’s assets are in less than 10 holdings. And he isn’t distracted by market-driven selloffs, paying more attention to the firm’s operating fundamentals.

Also, keep in mind, this is just a brief overview. The list is by no means all-inclusive. But if a prospective investment checks off all these boxes, then you might have a Buffett-worthy portfolio candidate. If nothing else, you’ll be investing in a mature, well-run, undervalued business with competitive advantages that yield lofty returns and excess cash.

Editor’s Note: If you want to stay bullish but at the same time lower risks, then you need to try Rapier’s Income Accelerator. It’s a new trading service run by my colleague Robert Rapier.

We’ve featured Robert’s insights several times in these pages. And when it comes to practical, no-nonsense advice for protecting your money and generating income, he’s one of only a few people we look to for reliable guidance.

Robert’s income-generating trades make money regardless of political turmoil, economic ups-and-downs, or pandemic uncertainties. And Robert has devised a new, safe way to quickly generate cash on demand, without risking your capital on risky assets that can wipe out your nest egg. Click here for details.