Jimmy’s Latest Big, Bold Prediction Is Too Good Not To Share…

Today I want to take a step back from the minutiae happening in the markets and focus on the bigger picture. We could spend all day dissecting the disappointing jobs report, reading the tea leaves from Janet Yellen or Jerome Powell’s words, or talking about vaccinations, inflation fears, or otherwise.

Don’t get me wrong, these are all worthwhile in some respects. But we shouldn’t take our eye off the ball when it comes to some of the major investing themes in play that could make us a lot of money regardless of what happens in the news.

That’s why I was thrilled to see my colleague Jimmy Butts circle back to a major trend that’s already made his followers a lot of money. It’s in an industry that’s already bigger than Hollywood and showing no signs of slowing down…

Now, understand that you don’t have to be a video gamer to profit from this — you don’t even have to like it, either. But this trend is simply too big to ignore.

In fact, Jimmy recently made a big, bold prediction in his latest issue of Top Stock Advisor… He thinks the video game industry is going to produce a trillion-dollar company before long. And it just may be his latest pick.

In the piece below, we’re going to hear more from Jimmy — including why he thinks now is a great time to put some money to work in this sector, if you haven’t already…

Prediction: The Video Game Industry Will Produce A Trillion-Dollar Company

The time has finally come. We’ve been patiently waiting…

One of my favorite industries – video gaming — has finally retreated, providing us with an opportunity to buy into this megatrend. Again.

I’ve talked about the massive gaming industry and why it’s worth your attention even you’re not familiar with this space several times. (For a good understanding of why, I suggest reading this and this.) By the time I covered this for the second time over at Top Stock Advisor in December 2020, the gaming industry was going through a growth spurt. But many of my favorite companies in the space were trading at too rich of valuation for me to recommend a position.

But as I’ve said before, “The best skill you can develop as an investor is simply the emotional discipline to be incredibly patient.”

This can be very difficult. When stocks or specific industries are going through euphoric stages our emotions take over. Our reaction is to “get in” so we don’t miss the boat. If you’ve been investing for any amount of time, then you’ve likely experienced this emotional tug-o-war at some point. And if you cave to those emotions, the investments don’t typically turn out well.

As Warren Buffett says, “the stock market is a device for transferring money from the impatient to the patient.”

But before I get into why now is a good time to put some money to work in the video game industry, I want to recap some of the incredible growth that’s happening in the space.

The Incredible Growth Of The Gaming Industry

In 2018, three of the top four most-viewed sporting events in the U.S. weren’t “sports” events at all… They were esports events.

The League of Legends World Championships pulled in more than 74 million viewers in 2018. In 2019, that number breached 100 million viewers, and last year it posted another record viewership figure. For comparison, the 2021 Superbowl between Tampa Bay and Kansas City was watched by 91.6 million viewers.

And esports is just a sliver of the overall gaming industry, albeit one of the fastest-growing.

In fact, according to the IDC — a market research firm — video game revenue of $180 billion is larger than the global film industry ($100 Billion) and North American Sports ($73 Billion) combined.

And the pandemic sent this growth into hyperdrive in 2020: 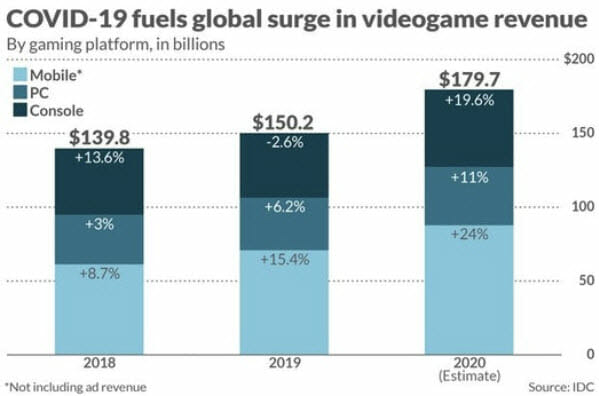 Diving deeper into the global games market, we can see that mobile gaming is leading the way. It accounts for 48% of the global market. But it should also be noted that every segment enjoyed growth last year: 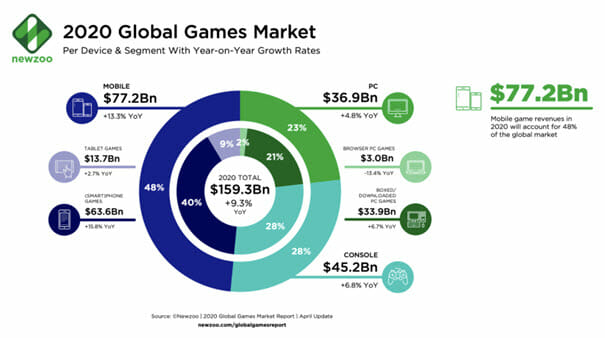 The bottom line is that there are plenty of tailwinds providing the gaming industry with exciting momentum and growth. And there are multiple ways one can invest in this megatrend.

Over at Top Stock Advisor, we already have direct exposure through our Electronics Arts (Nasdaq: EA) holding. The company is a big player in the space. It produces some of the most popular gaming titles in the world with the FIFA soccer game franchise, Madden NFL football franchise, Battlefield shooter series, and the Apex Legends battle royale series.

If you’re just looking at this space for the first time, you probably can’t go wrong with Electronic Arts. We’re up a solid 35% on our position in EA, but there are plenty of other choices out there for investors — including ones that have a lot more upside potential.

That’s especially true today. After last year’s meteoric rise, the gaming industry has cooled down. And while valuations are still on the higher side, they’re a bit more manageable and easier to digest.

But here’s the thing with valuations, and it especially applies to the gaming space in general… valuation doesn’t matter quite as much if the industry grows as I expect it to. Keep in mind that most of today’s biggest names — Amazon, Facebook, etc. — traded at rich multiples throughout most of their publicly-traded lives.

I put out a report — Three Undercover Stocks For 10x Gains — at the beginning of the year, highlighting one of my favorite “speculative” plays in the gaming space. The stock is a company called Skillz (Nasdaq: SKLZ).

Skillz provides a platform to turn any mobile game on iOS and Android into one you can play with friends or strangers for cash, prizes, or points. It also enables esports tournaments for games that are integrated into its platform. It’s the first mobile esports platform to go public and should be in prime position to take advantage of the booming video-game and esports space.

Shares of SKLZ more than doubled in the month following the publication of my report. The stock was riding the tailwinds of the newfound excitement happening in the gaming space. However, since peaking in February this year shares have tumbled back to earth. 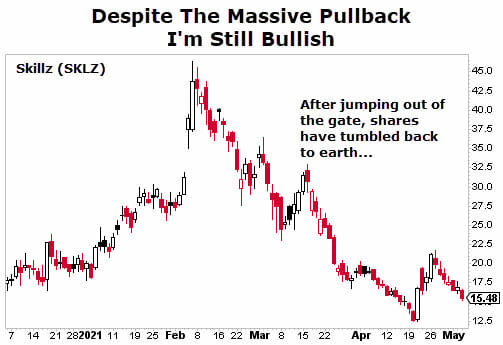 I’m still very bullish on SKLZ and the stock is back to trading under my “Buy Under” price.

The point is that many gaming stocks have fallen dramatically from all-time highs, presenting us with an opportunity to buy some of the best gaming stocks out there.

The Next Trillion-Dollar Company?

My latest recommendation over at Top Stock Advisor is a bit of a “picks and shovels” approach to the gaming industry. This company provides a platform for games to be built on and is leading the charge in the new revolution of how games will be played and viewed — virtual and augmented reality.

This pick just went public last year. I’ve been keeping tabs on the stock long before its public debut. And now that the IPO is in the rearview mirror and we have some visibility into the numbers, I think now is the time to strike.

Now, this may sound a little crazy at first, but bear with me… At some point, we’ll see a company in the video gaming industry become a trillion-dollar company.

It could very well be my latest pick — that’s how big it’s total addressable market is… The tech it’s using can be applied not only to video games, but to a whole host of other applications. Regardless, I think it’s only a matter of time before it happens in this industry overall.

If you’d like to get the name of my latest pick, then I’d like to invite you to check out Top Stock Advisor. You’ll get the chance to get your hands on my latest annual report of shocking investment predictions — which has led investors to more triple-digit gains than anything we put out all year. In fact, I wouldn’t be surprised if we made this one of our predictions for next year…