The “Coke” Of Trucks Goes Electric, Plus A Critical Supply Chain Pick That’s Up 120% (And Counting…)

The market had a strong rebound Thursday after a few weak days fueled by inflation fears. But encouraging jobless data sent the major averages higher.

About 444,000 people filed jobless claims in the week ending May 5, which was lower than last week. It’s undoubtedly a good sign for the overall recovery. I don’t know about you, but I’ve seen a lot of headlines and heard quite a few anecdotal reports of businesses that simply can’t find people to fill their open positions. And while this is still anecdotal at this point, it will be interesting to see if the situation persists.

My take: if issues with supply chains can be fixed soon, and if the official numbers show the labor market is indeed tightening, then the recovery may be even hotter than many policymakers and experts think…

As it turns out, they may think so too… The Federal Reserve all but said as much in its meeting minutes published earlier this week.

To sum up what The Wall Street Journal reported, a few Fed members hinted that they’re thinking about “thinking about” tapering asset purchases. Fed Governor Christopher Waller, for example, has said that they would prefer to see months of data before making any decisions. That’s all we get for now, because the consensus seems to be that the signs of inflation cropping up are “transitory” in nature and related in large part to supply chains disrupted by Covid.

I’ve got more to say about supply chains later in today’s issue. But for now, let’s talk about trucks…

The “Coke” of Trucks Goes Electric

The No. 2 automaker in the United States debuted its brand-new, all-electric, F-150 model Wednesday night. Dubbed the Lightening, it could usher in a new era for the legacy automaker as it looks to surpass the likes of Tesla (Nasdaq: TSLA) in the electric car battle.

Now, I should note that we’re a Chevy truck family – but I couldn’t help but take a closer look at the truck for more reasons than one. 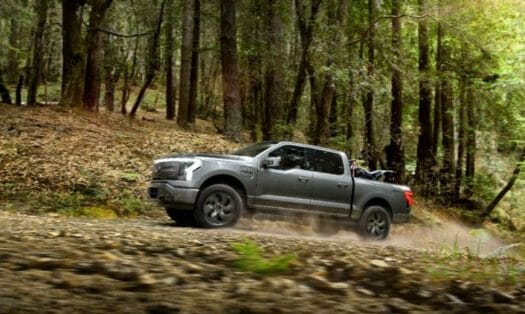 First, it should be noted, that Ford’s electric reimagining of the Mustang (the Mach E) as a sport utility vehicle drew some polarizing reactions. But it’s reportedly drawing a lot of attention from buyers. But the die-hards who care about the Musang legacy are growing fewer by the day. The F-series pickups, on the other hand, are the No. 1 selling vehicle in the U.S. – so this is kind of a big deal.

The Lightening looks a lot like the traditional internal combustion model – which is undoubtedly a strategic choice. For the company to appeal to its traditional base, it needs to look like a Ford truck. (As Ford CEO Jim Farley noted on a podcast, there’s only one Coke.)

But it also needs to bring the goods, so to speak, it it’s ever going to appeal to EV buyers and traditional truck buyers alike. And it seems like Ford has taken a big leap forward on this front.

The performance numbers are incredible… The company claims the extended range model can drive up to 300 miles, with 563 horsepower, 775 pound-feet of torque, and go from 0 to 60 in less than 5 seconds. (That makes it the fastest F-150 ever made.)

It’s full of all kinds of neat features, too… Wide touchscreen monitor, an internal scale that will adjust your fuel range if you’re towing or hauling something, over-the-air software updates, and even an 80-amp home charging station for the extended range model that can charge your pickup in 8 hours or power the average home for three days. And that’s just the tip of the iceberg… (For a full overview of the truck, this piece does an excellent job.)

The extended range model will set you back by about $50,000, while the base model (230-mi. range) will take about 40 grand (Federal tax credits notwithstanding).

In the bigger picture, Ford is planning to invest up to $22 billion in its EV product lineup. That includes not only the vehicles themselves, but also the batteries.

Does that mean Tesla is in trouble? Only time will tell. But EVs are happening, and investors should take notice. In the meantime, Ford has made an incredible comeback since the dark days of the Covid-selloff, up more than 50% this year. 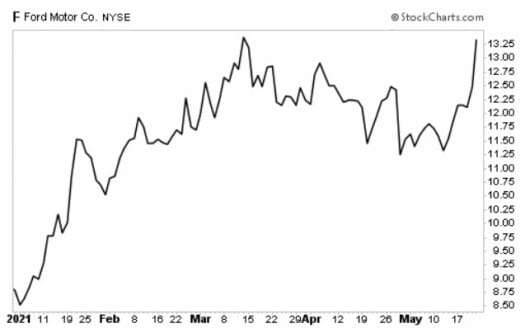 This got me thinking about our discussions on lumber prices, copper, and other inflation-related topics over the past few weeks.

I listened to an interesting podcast a couple of years ago, where the host sat down for an interview with a “prepping” expert. He mentioned a fascinating tidbit about logistics and supply chains that I’ll never forget.

In short, he said that if a disaster ever strikes, your grocery store is about 72 hours away from Armageddon. If for any reason the trucks stop delivering, that’s about how much stock they have on hand in the back. After that, all bets are off.

That may have seemed like alarmist talk a couple of years ago, but I gotta tell ya, it’s stuck with me ever since. I remembered this when I ran across this cool infographic, which details what would happen across a host of critical areas if the 18-wheelers weren’t able to get to where they need to be.

I think we’ve all seen bits and pieces of this infographic play out during Covid-19. And it’s clear that there are still parts of the supply chain that have kinks that need to work themselves out as we emerge from the pandemic.

But it also makes my colleague Nathan Slaughter look like a prophet.

As some of you may know, Nathan sent the inaugural issue of his new Takeover Trader service around this time last year. And his very first addition to the portfolio is, you guessed it, a trucking logistics company. 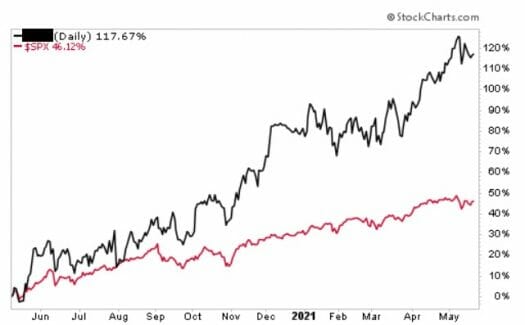 The company owns 1,500 warehouse facilities, including dozens of coveted “last-mile” hubs strategically located within a short drive of 90% of the U.S. population. As Nathan puts it, as one of the nation’s largest internet fulfillment providers, this pick profits almost every time somebody clicks the “add to cart” button.

But the company has many facets to the entire operation. It’s the world’s second-largest freight broker and the top provider of expedited truck shipments in North America. It specializes in the delivery of heavy, bulky items, such as appliances.

Nathan saw early on that this pick was worth more than the sum of its parts. And as it turns out, the company’s Board of Directors agrees. They’re in the middle of ironing out the details of a spinoff, which will further unlock value for shareholders – not to mention make it an appetizing takeover target.

I won’t reveal the name of this pick just yet, out of fairness to Nathan’s subscribers. Because while they’re already up close to 120% on this pick since last May (more than doubling the market) – this deal could lead to even more upside ahead.

In the meantime, stay tuned for Nathan’s next big research project. In just a year, he’s already identified a string of triple-digit winners. And his latest work could lead to even more big wins…

Editor’s Note: Do you feel like you missed the boat with Tesla? Then you’ll want to hear about Elon Musk’s latest project…

The billionaire tech mogul’s latest project (Starlink) is already is rolling out across the globe. But there’s just one problem… It’s currently “off limits” to regular investors…