I hope you have some fun plans for this long Memorial Day weekend. My family will be donning our best pairs of boots and formal wear for a good old fashioned wedding on Sunday before grilling out with friends by the pool on Monday.

And of course, be sure and take some time to think about the Americans who have given their lives in sacrifice to this country.

Today, we’re handing things over to Jimmy Butts, Chief Investment Strategist of Top Stock Advisor, for an entertaining read about a uniquely American success story — and one that could still deliver solid returns to investors today…

In April of 1964, a man got a shipment of shoes from Japan on his doorstep. It was all he needed… the next day, he went to work and quit.

After leaving his accounting job, he began to cruise around the Pacific Northwest, going from track meet to track meet selling those shoes out of the trunk of his car. Most folks thought this was ludicrous. After all, who quits a stable, good-paying job to sling shoes out of their vehicle?

Fortunately, this man was a heck of a salesman, with a likable personality. He’d chat up coaches, runners, and fans, and show them his shoes. According to him, he “couldn’t write orders fast enough.”

Things were going so well that one year into his endeavor he hired his first employee: a man named Jeff Johnson. As bold, ambitious, and prolific a salesman as this guy was, Johnson was even better.

Johnson’s selling strategy was similar. But where he really shined was when it came to building relationships. Johnson was on a whole new level. Every time he sold a pair of shoes Johnson would create an index card for that customer. He’d jot down all sorts of details on the 3×5 card including shoe size, shoe preference, favorite distance, upcoming track meets, etc. Johnson then used these handcrafted note cards to keep in touch with customers. He’d send birthday cards and well wishes before a big race. He soon had a “database” of hundreds of customers with which he would have regular correspondence.

Remember, this is long before the days of cell phones, text messaging, and customer relationship management (“CRM”) software like Salesforce. Compared to today, it might as well have been pigeon carriers… But regardless, his sales and relationship-building skills helped Johnson sell a whopping 3,250 pairs of shoes in just 10 months.

You see, at this point, most of their sales had come from the West coast, and the Pacific Northwest in particular. But they wanted to extend the brand — and the company’s presence — to the East coast. So, Johnson loaded up in his vehicle and drove across the country.

It was a starting point, and Johnson leveraged his relationships to begin building his network and growing the Blue Ribbon Sports brand. If you knew about this company, the people who worked for it, and especially if you had worn their shoes, it was hard not to root for them. And in turn, tell all your friends, family, and anyone interested in running, about them.

With just the power of a small sales force and word of mouth, Blue Ribbon Sports sold its first 50,000 shoes.

The guy I’m referring to who got his start selling shoes out of the trunk of his car is a man named Phil Knight. And according to Forbes, he’s worth about $51 billion today.

Today, the company he founded is no longer called Blue Ribbon Sports. Instead, they go by Nike, Inc. (NYSE: NKE).

One Of The World’s Most Valuable Brands 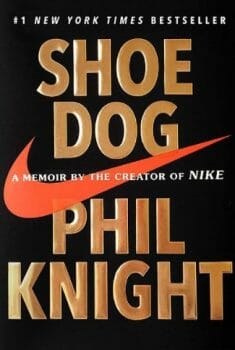 Nike was the brainchild of Phil Knight and Bill Bowerman, former track-and-field coach at the University of Oregon. In the early years, the company was essentially the U.S. distributor for running shoes made by the Japanese company Onitsuka Tiger, better known as Asics. But after great success, the company began developing and manufacturing its own shoes.

If you know the backstory to Nike, it’s hard to believe the company will do more than $40 billion in sales this fiscal year.

When looking at the nuts and bolts of the company, it obviously makes a bundle of cash off its footwear and apparel products. But there’s more to this company than meets the eye.

The company’s fiscal year runs from May to May every year, so its fiscal 2020 year ended in May last year. Of course, the company was impacted by the health pandemic with store closures. During its fiscal fourth quarter, which was the months of March, April, and May last year, the company saw a staggering 38% decrease in sales.

That’s its largest quarterly percentage drop in the last two decades. Previously, the largest decrease came during the financial crisis in 2008, when sales dipped 12%. But even with that staggering decrease in sales the company only saw a 4% decrease in overall sales in its fiscal 2020 compared with 2019. What’s more, it’s on track to rebound in a big way this year. Estimates are calling for total sales of $43.3 billion in fiscal 2021 — more than the $39 billion it reported before the pandemic swept the world.

On that $43 billion, it’s expected to churn out free cash flow over $5.4 billion, which of course, will dwarf the $1.4 billion it generated the previous year.

A Tech Company That Sells Apparel

Nike’s fundamentals are strong. Even with a black-swan event that shut everything down, the company churned out positive cash flow and maintains a stout balance sheet.

And a lot of that success comes from the company’s ability to adapt. Its e-commerce division has been growing at a double-digit annual clip for a couple of years. Covid-19 helped expedite that.

When the company reported its fiscal third-quarter results on March 18, its Nike Direct sales jumped 20%, while its digital sales increased a whopping 59%. This isn’t just a one-hit quarter wonder, either. Its digital sales division grew at a 42% clip in September 2019 — before Covid-19 struck.

Nike continues to invest in its technology. For instance, it purchased a company called Invertex for its Nike Fit app. Then it acquired a company called Celect, which is a predictive analytics company that Nike integrated into its mobile apps to better predict what styles of sneakers and apparel customers want.

Nike has come a long way from 3×5 index cards. And its mobile apps have been a huge growth factor in digital sales. The company leverages its brand power to distribute through sales channels all across the world, then it uses its technology to optimize those channels and build a moat around its brand.

As well known as that brand is, you might find it surprising that only 0.27% of shares outstanding are held by individual investors not named Phil Knight. And that’s too bad… because the stock has been dominant over the years. 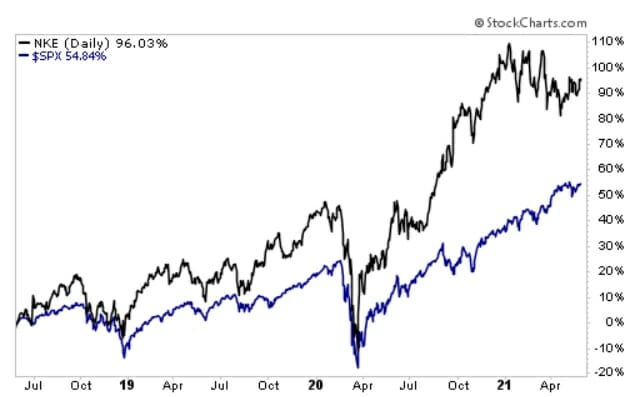 As you can see, this stock has more than doubled the performance of the S&P 500. In fact, over the last 30 years, shares are up more than 25,000%, dwarfing the roughly 1,000% return of the broader market over the same time frame.

A Long-Term Winner Staring Us In The Face

Of course, very few individual investors have enjoyed these types of returns. Nike is so well-known that it’s not likely to score you many bonus points around the water cooler at work (or Zoom cooler these days). And that’s a shame.

But as I’ve said many times before over at Top Stock Advisor, we often make investing more complicated than it needs to be.

We want to root out the next Nike, or Facebook, or Google before they become household names. That’s fine, but when it comes at the expense of investing in Nike, Facebook, or Google when there’s plenty of meat left on the bone… well, that’s a problem.

Why bother with high-risk penny stocks or cryptocurrencies, hoping to strike it rich, when you can get rich slowly (and sleep well at night) by owning a world-class brand that dominates year in, year out?

I think Nike is one of those stocks today. We’ll get a clearer picture when the company announces earnings in late June.

P.S. I have nothing against taking a home-run swing now and again… In fact, there’s a portion of our portfolio that we dedicate to those types of investments over at Top Stock Advisor...

And if you’re looking for something more along these lines, then you need to check out my latest report about Elon Musk’s latest project (Starlink).

The eccentric billionaire’s project is already is rolling out across the globe. But there’s just one problem… It’s currently “off limits” to regular investors…