The Market Reawakens, Amazon’s Latest Deal, And The “Next Investment Frontier”…

After a couple of weeks of inflation uncertainty, the market seems to have found what it needs to regain its footing and continue climbing higher.

The primary driver of the renewed confidence comes in the form of some encouraging macro data. Among those data points were jobless claims, which dipped to about 458,000 (on a four-week rolling average) from 504,000. It marks a new low since the Covid-19 pandemic swept the country.

This is good news, of course, for the recovery – but there seems to be reason to believe that the labor market is even tighter than we think. (As a side note, I’ve personally spoken with people who own restaurants, work in advertising, construction, and the legal profession who have all had difficulties finding people for open positions.)

St. Louis Fed President James Bullard recently stated that he thinks the labor market is much tighter than what the data says. He also said the Fed is “close” to launching a discussion to begin tapering its $120 billion per-month asset purchasing program.

Meanwhile, in Washington D.C., it looks as if we may finally get an infrastructure bill. Republicans in the Senate have a counterproposal to President Biden’s $1.7 trillion package. The price tag on that one is $982 billion, so there is still some distance to close before the two sides reach an agreement, but we may know by the end of the week if both sides have closed the gap.

In the meantime, let’s take a look at Amazon’s latest deal and hear more from my colleague Jimmy Butts about the “next investment frontier”…

Amazon’s Latest Deal (Are There More To Come?)

It’s kind of surprising when you think about it, but Amazon just really hasn’t made many mega-deals over its life as a company.

That may be changing soon.

Last week, the e-commerce giant announced that it is acquiring MGM studios in an $8.5 billion deal. If you’re an Amazon customer, that means you’ll likely be able to watch James Bond or Rocky movies on your Prime video service (along with potentially thousands of other titles).

The storied movie studio has the rights to more than 4,000 films. It will also help Amazon produce new movies and TV shows more efficiently, and give it more ammo in the streaming wars. 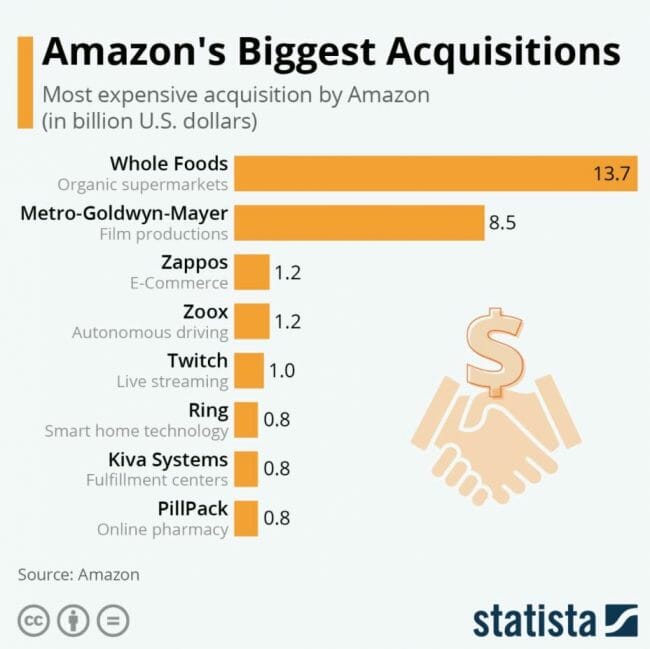 The deal will be Amazon’s second-largest, only behind the 2017 takeover of the Whole Foods organic grocery chain. It may also be a sign of more deals to come.

Nathan Slaughter, Chief Investment Strategist of Takeover Trader has been making the case for the past few months that companies will be starving for new deals as we emerge from the pandemic. All the ingredients are in place… Low interest rates, big tech companies with hundreds of billions in their war chests, smaller players with exciting products who need a bigger partner to unlock their true potential…

In fact, since first launching Takeover Trader last year, they’ve identified winning trades that include: a logistics firm that would fit right in with Amazon (and is up 121%), a travel search company that’s up 134%, and a major player in the streaming TV wars that’s up 223%.

Nathan and his team have been putting the finishing touches on a brand-new report that will detail some of the most exciting opportunities they’ve seen in years. We’ll hear more from Nathan in the coming weeks about the opportunities he’s seeing right now. In the meantime, stay tuned…

The “Next Investment Frontier” Could Make Early Investors A Killing

It’s the “last frontier” in a lot of ways… Not just in terms of exploration, but also as one of the few industries with near-unlimited potential that are still in the very early stages of development.

A few months ago, I told my Top Stock Advisor readers that sooner or later, just about every tech company will have a footprint in space.

And before you think we’re crazy, you should know that already, at this very moment, some very smart people are working on commercializing space. And I’m not just talking about Elon Musk (although he’s definitely one of them)…

Goldman Sachs calls it the “Next Investment Frontier.” Bank of America projects that TRILLIONS of dollars will flow into the space industry in the coming years. Morgan Stanley estimates “the global space industry could generate revenue of more than $1 trillion or more in 2040, up from $350 billion currently.”

I’ve spent the past year researching this emerging industry. It will take some time, but mark my words, in the not-too-distant future, we’re all going to wake up and commercialized space will be mainstream. I think it’s going to be the “next big thing” that will make early investors a killing.

In fact, I can tell you exactly how this next great investment market will play out, and how early investors can strike it rich. After all, we’ve seen the blueprint for these “next-generation” investment markets play out over and over again…

Take the personal computer space and technology as an example.

The first “computers” were the size of a garage and cost a fortune. Because of its size and price, most people didn’t think much of it, and few realized how transformative these computers would become.

But as money flooded into this “new” computer market, the technology evolved — and more importantly — it became cheaper.

Personal computers continued to get smaller and eventually become more affordable for affluent households to own one.

Today, you can hold that “computer” in your hand, as your smartphone or tablet has more computing power than those early generation computers. Heck, you can even buy a computer for just a few hundred bucks.

You see, as more money poured into the technology it not only became more readily available to every person in the world, but it made early investors extremely wealthy.

Just look at Microsoft (Nasdaq: MSFT) over the last 10 years — and this is well after the computer revolution was underway. But had you bought shares of Microsoft in 2011, you’d be up a whopping 1,100%… 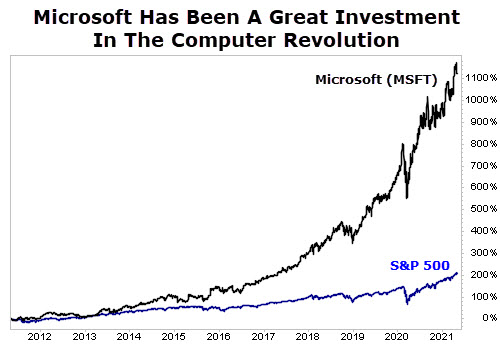 Not only is that a life-changing return, but it gives us a near-perfect example of exactly how investing in the space industry could play out.

Right now, for the vast majority of folks, the space industry isn’t even on their radar. And why should it be? It’s outrageously expensive to build and send rockets and satellites to space. Not to mention the fact that they could blow up or break on their way to orbit.

But just like in the early days of computers, there are a few that continue to innovate and invest in the technology to make it work. And now the space industry is gaining more and more traction with each passing month.

Institutional investors, tech companies, military firms, and other private institutions are piling money into the industry because they also know the playbook of how it could turn out and the returns that could follow.

Of course, the industry is still in its infancy so it’s hard to pinpoint the exact player that will dominate the market for years to come. But I have a handful of companies that I have my eye on – including one that is absolutely critical to Elon Musk’s latest space project (Starlink).