I knew this day would come. In a few weeks, my oldest son Riley will be heading off to college. As any parent in this situation can attest, the short time between high school graduation and college orientation stirs up a whirlwind of bittersweet emotions – part nostalgia, part apprehension, but mostly pride.

That, and the sudden realization that you are about to cough up a lot of money.

The good news is that I know I’m not alone in this experience. Parents all across the country are facing a similar situation right now…

Is it too late to make any last-minute deposits to the college savings account? I’m only half-joking. When the account was first opened back in 2003, I was still working as a financial advisor, lecturing my clients daily about the importance of making college funding contributions as early (and often) as possible. You want to allow ample time for compound interest to work its magic.

I knew the math all too well. But college always seemed so far in the distant future – and I’m a professional procrastinator. Well, the future snuck up on me. It’s here. And the University of Arkansas will be wanting a check soon. The administrators were kind enough to summarize the expected financial outlay for tuition, textbooks, lodging, and meal plan.

In all honesty, we haven’t set aside nearly enough – a few scraps for a hungry bear. It won’t keep the beast quiet for long. Fortunately, we have reserves elsewhere that can be tapped. Still, I would strongly encourage those of you with young kids not to wait until the cap and gown fitting to start salting money away. Act early and take full advantage of your state’s 529 savings plan (including any tax deductions or other perks).

Fortunately, the good folks over at Sallie Mae are happy to help cover any funding gaps with low-cost student loans. And thanks to today’s low-rate environment, well-qualified borrowers can access funds as low as 1.13% for a variable loan and 4.25% for a fixed loan.

Choosing the right option can be a real dilemma. Even the most prescient rate forecasters can’t reach a consensus on where borrowing costs will be a year from now – let alone when the class of 2025 graduates. Like an inscrutable poker player, the Fed is tough to read and plays its cards close to the vest.

And that brings me to my bigger point… The twelve men and women appointed to the Federal Open Market Committee (FOMC) wield considerable power. They influence not only the rates you pay for a car or a house (or a student loan), but their very words can set the trading tone for global stock and bond markets, unleashing powerful rallies and equally spectacular crashes.

When they speak, it pays to listen.

The Fed Vs. Inflation – Who Blinks First?

Whether you are a borrower or an investor (most of us are both), everyone has a vested interest in the future direction of interest rates. Considering benchmark short-term rates have been anchored at zero since the onset of the pandemic, it’s a safe bet that the next move will be up.

The only question is when.

The Fed Funds futures market is currently pricing in a 90% probability of rate tightening over the next 18 months. But why not go straight to the horse’s mouth? The latest “dot-plot” projections show 11 of the 12 members of the FOMC anticipate a pair of quarter-point rate bumps in 2023. 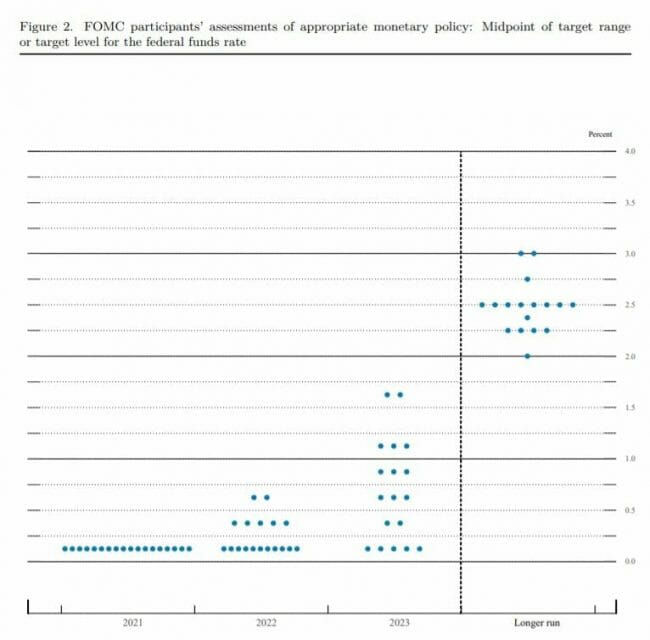 And these are the people calling the shots.

For what it’s worth, the group saw no rate hikes on the horizon back in March. Suddenly in July, they are now expecting two. Clearly, something has changed. St. Louis Fed President Jim Bullard believes we’ll actually see the first rate hike next year in 2022. Seven FOMC policymakers agree.

But what happens after that?

The Central Bank has remained consistently dovish and will likely take a measured wait-and-see approach. Fed Chief Jerome Powell and his cohorts have painstakingly jump-started the pandemic-stricken U.S. economy and will be highly reluctant to take aggressive steps that could potentially derail its momentum.

So they will be deliberately slow on the trigger.

There have been gin-clear indicators of latent inflationary pressure. We’ve all seen them. Yet, far from tapping the brakes, the Fed has left its foot firmly planted on the quantitative easing gas pedal. In the twin mandate to maximize employment and corral inflation, the former is clearly the top priority right now.

But again, things are starting to change.

The Fed’s preferred inflation barometer is the Personal Consumption Expenditures (PCE) index. This particular gauge spiked 3.4% last month, the sharpest annual increase in about 30 years — and well above the Fed’s 2.0% comfort zone. Meanwhile, the same trend was echoed by a 5.4% surge in the benchmark consumer price index (CPI). Some of that increase can be blamed on volatile food and energy prices. But strip them out, and core CPI still revealed a 4.5% uptick in June – the highest since 1991. 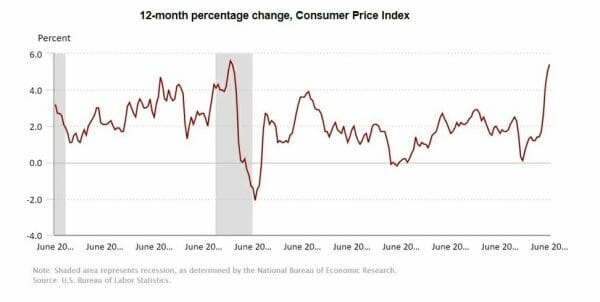 This isn’t an anomaly. We’ve been seeing it for months. May’s core CPI reading showed the most severe inflation since May 1992. For perspective, I was graduating high school and preparing for college that month. That’s the last time inflation ran this hot.

If you’ve tried to book a summer vacation, then you have seen this in full effect. Average airfare has climbed 24% over the past year. Car rental rates have skyrocketed 110%. And you can forget about finding a beachfront or lakeside property rental. There is scant available inventory on sites like Expedia or VRBO as record-breaking crowds pour into popular destinations.

A standard Best Western hotel room in Destin, Florida for next Saturday night runs $370. I travel frequently and have never seen anything quite like it.

The Fed certainly isn’t blind to these numbers. But it has largely dismissed them as transitory, the temporary result of Covid supply chain disruptions and one-off stimulus check spending. To be fair, some of the data points support that argument. The unprecedented events of 2020 have certainly skewed year-over-year comparisons in 2021.

And runaway prices will likely moderate as supplies catch up with demand. We’ve already seen that with lumber.

But I’m not sold on the notion that this wave will crest and everything will quiet down in a few months. Let’s strip out Covid distortions and look back at current prices versus pre-pandemic levels from two years ago. On that basis, CPI has still climbed by a fairly robust 2.5%.

Furthermore, labor costs are creeping upward because there aren’t enough applicants to fill the current record-high 9.3 million job openings. And as we’ve discussed, the shortage of raw materials has led to price hikes for everything from beer to breakfast cereal. According to the Wall Street Journal, 48% of the nation’s small businesses lifted their prices last month – the most since 1981.

Let me ask you this: how often do you see retail prices drop?

Businesses are usually quick to adjust upward when costs rise, but slow to lower when they fall (they will gladly pocket the extra margin). Translation: these higher prices are here to stay.

Even Chairman Powell concedes that inflation may be picking up steam. Here’s what he had to say a few days ago. “We’re experiencing a big uptick in inflation, bigger than many expected, bigger certainly than I expected.”

If these pressures don’t subside, his hand may be forced. How long until we stop using the word “temporary”. Three months? Six months?

The point is, the next time you see some news about the Fed or interest rates and you begin to ignore it, you may want to think again. This stuff has very real consequences.

Let’s circle back to the loan dilemma. We’ve had rock-bottom rates for well over a decade and that is unlikely to change over the next couple of years. The Fed wants to remain accommodative. So there is a strong argument for choosing the low variable rate and pressing your luck.

Yet, it takes well over a decade to pay off most student loans. Who knows what things will look like in 2031? The economy is racing, and there is no ceiling once rates start to move higher. There’s some reassurance and peace of mind in being locked in at 4.25% regardless of what the Fed does.

Personally, I’m leaning towards taking the variable loan with no pre-payment penalty. If and when rates climb back above 4.25%, I can always pay off the balance in cash. Either way, it’s a good time to be a borrower in this environment.

Of course, the calculus is a little different if you’re an investor who needs to earn income. I hear a lot of people say that the (good) high yields are all gone. But nothing could be further from the truth…

Sure, they’re tougher to find, but they’re out there. Just last month, we added a real estate lender to our portfolio over at High-Yield Investing that’s generating enough interest to support a lofty 8% yield.

In fact, I just released a new report about five “bulletproof” income payers who have proven to be so strong, so reliable, and so generous… that they can be counted on, no matter what happens with the economy.

Each of them yields over 5% right now. And each one of them has provided us with fantastic long-term returns. And I have little doubt that they’ll continue to do so for years to come.