As many of you know, we’re smack dab in the middle of earnings season. And so far this has been one to remember…

Today, I want to hone in on a few of these quarterly results, because I think it’s important to understand just how far these companies have come – and why they are still “buys” today.

Why? Well, for starters, it’s hard to argue with their results.

In a world where just about every individual investor is looking to “beat” the market, for most, that means trying to find that “next” Amazon, Facebook, etc. In reality, at just about any point over the past 15 years, most of those folks would be a lot better off just buying these names – and they would have still beaten the market.

Secondly, I’ve long advocated that investors should have a group of “no-brainer” stocks at the core of their portfolios. This makes it easier for you to sleep at night. Having a group of “high confidence” names in your portfolio makes it a lot easier to take a big swing at that next big opportunity if and when it comes across your radar.

And I’m not alone in this sentiment. In fact, my colleague Jimmy Butts, Chief Strategist of Top Stock Advisor, has advocated this for years. In just a second, I’m going to turn things over to Jimmy to discuss earnings results for two of these big tech companies (Facebook and Alphabet).

The world’s most valuable company keeps chugging right along.

The important thing to understand about Apple is that it is increasingly less reliant on iPhone sales. Make no mistake, they’re still crucial to the company’s success. But Apple is evolving before our very eyes – turning into a “wearables” and services powerhouse.

In fact, those two categories grew revenue by 33% and 36% last quarter, respectively.

Not to be outdone, iPhone sales grew 50%. But for the first time in a long, long time, iPhone sales represented less than half of Apple’s revenue. That’s a big deal.

Consider this, Apple’s “services” segment generated $17.5 billion in revenue last quarter, thanks to700 million paid subscriptions for everything from iCloud to Apple Music. Not only is that a new record for the segment, but it now represents more than 20% of the entire business. 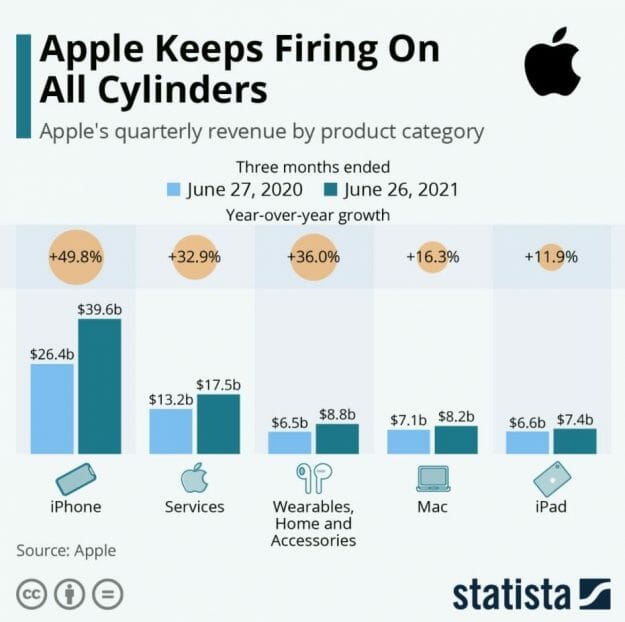 To fully understand how well Apple is doing right now, think about this… If the company were to close up shop for the rest of the year, with net income of $74.1 billion, it will have already had its best year in terms of profitability. Ever. (The previous number is $59.5 billion in 2018.)

Now, I have a simple question for you… If you don’t already own Apple, why not?

Believe me, I’ve learned this from personal experience. I’ve owned Apple since 2014. And two of the biggest mistakes I’ve made in my investing career are not buying Apple sooner – and not buying more of it when I finally did.

As my colleague Brad Briggs mentioned, we had a slew of earnings results from Big Tech last week.

And over at my premium service, Top Stock Advisor, we own two of the big ones: Facebook and Alphabet.

As Brad mentioned, I’m a big fan of the “no-brainer” play. Said another way, our core mission is a lot like Buffett’s — to find wonderful businesses trading at fair prices.

Don’t get me wrong, we still take our fair share of shots on “big upside” plays. But you need to have this part of your portfolio locked in first. And the best part about it? Stocks like this can still end up doing quite well for you over the long run.

That’s never been more true than in the case of Facebook and Google parent Alphabet. Let’s take a look at the results from each company to understand why these juggernauts still deserve a place in your portfolio…

Facebook’s $29 billion in quarterly revenue was a staggering 55.6% increase over the same period a year ago. It also pulled in more than $13.2 billion in cash flow, giving it a cash flow return on invested capital of 36.5%.

We talk about these large sales numbers so much that we can become numb to just how impressive they are. It’s not easy for a trillion-dollar company to really move the sales needle. Yet, Facebook continues to do so.

Despite yet another excellent quarter, shares of Facebook slid after the earnings release. Management warned that its sales growth rates for the third and fourth quarters will decelerate as they will be compared to unusually strong quarters in 2020.

I’m not terribly worried if sales growth slows to a lower double-digits figure over the next two quarters because I believe the prospects of Facebook remain bright. In fact, I think FB is a buy for new investors under $378 because shares aren’t wildly overvalued.

Its price-to-sales multiple, as well as its enterprise value to earnings before interest, taxes, depreciation, and amortization (EV/EBITDA) multiple, are both trading below historical averages.

If you are looking to start a position in Facebook or add to an existing one, now is a good time. Since adding Facebook to my portfolio in June 2016 shares have ripped off a nice 202% return. 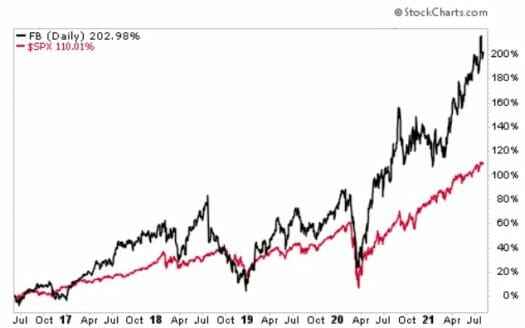 The story is similar for Alphabet (Nasdaq: GOOGL). The company reported earnings on July 27 and posted sales of $61.9 billion and earnings per share of $27.26 per share. Both of these figures blew away analyst expectations, beating by 10.1% and 41.7%, respectively.

It’s also crazy to think that the Google parent has more than $135 billion in cash lying around in its corporate coffers.

Alphabet is also trading for reasonable prices at these levels, with a P/E multiple of 29.2. 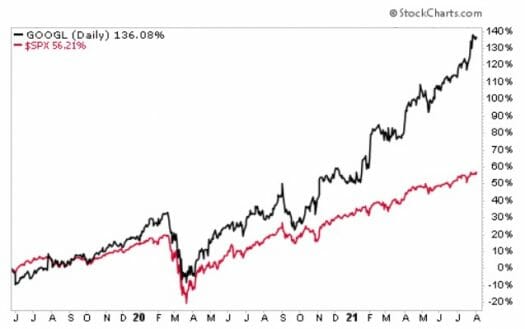 Look, I’m not going to bore you with the details. You know Google. You know it is THE big player in search and online advertising. And that’s not going to change anytime soon. The point is, Alphabet is an outstanding business. It’s trading for reasonable valuations, and should be a strong performer over the coming years.

We’ve done very, very well with both Facebook and Alphabet. And I don’t expect that to change.

When we bought these two stocks, I have to admit, part of me felt like we missed the boat. But as I constantly tell my Top Stock Advisor readers, our bread and butter is finding wonderful companies trading at fair prices.

That’s exactly what we got back then, and it’s worked out wonderfully for us. And the good news is that investors still have that chance today.

In all honesty, all four of those big tech names mentioned earlier (Facebook, Apple, Alphabet, Amazon) should deserve serious consideration for nearly every person’s portfolio.

In fact, these five securities have proven to be so strong, so reliable, and so generous… that they can be counted on, no matter what happens with the economy.

Each of them yields over 5% right now. And each one of them has provided us with fantastic long-term returns. And like the stocks mentioned today, we have little doubt that they’ll continue to do so for years to come.