Samsung’s Coming To Texas… Apple’s Car Project… And The Next Trillion-Dollar Company?

Before we jump into today’s issue, I want to take a moment to wish each and every one of you a happy Thanksgiving.

For the first time in a while, we’re not travelling anywhere this year. So to those of you that are, may the airport lines be short and the roads free and clear. (Hey, it’s wishful thinking, I know…)

Whatever your plans are, do yourself a favor and take some time to unplug from the world. Spend some quality time with family.

The market will be here when you get back.

Yesterday, I learned that we’re getting new neighbors. Global electronics giant Samsung will build a giant advanced chipmaking plant in Taylor, which is a small, rural community just 30 miles outside of Austin.

Add that to the growing list of tech companies moving to our backyard. Apple’s soon-to-be-completed $1 billion-plus campus is practically across the street, Oracle relocated down south, and soon Tesla will have its headquarters here (in addition to its Gigafactory).

But that’s not the big story here.

If that sounds like a big deal, it’s because it is. Think of it as a long-term strategic investment. We’re already in a global chip shortage, and demand is only going to increase from here on out.

The expansion comes as the global semiconductor shortage continues to cause major problems for everyone from console makers to car manufacturers. It’s a situation that’s unlikely to abate until at least 2023, according to recent comments from Intel CEO Pat Gelsinger.

As the article points out, global chip giants are scrambling to alleviate the situation as well as prepare for the future. The Biden administration is getting in on the act, too, with the Senate recently approving $52 billion in subsidies for new chip plants (although the legislation is still pending in the House).

And just about every large company that needs chips, from Ford to Apple, are looking for ways to bring design and/or production in-house to meet their growing needs. More on that in a moment…

The Apple Car… On A Road Near You?

Bloomberg reported this week that Apple is feeling confident about its long-rumored “Apple car” project (codename: Project Titan). So confident, in fact, that it expects to have a fully driverless EV by 2025, well ahead of what some experts thought.

Part of the reason for optimism is that Apple thinks it has hit one of the key milestones: developing a sufficiently-powerful processor that can handle all of the advanced-AI calculations necessary for real-time autonomous driving.

The chip was designed in-house. (Noticing a pattern here?)

Apple got a nice little boost from the news on Monday, before retreating slightly along with the rest of the tech sector.

But the long-term implications of this are huge.

For background, the current leader of the division, Kevin Lynch, formerly helmed Apple’s smartwatch and health software division. As Bloomberg reports, since taking over the unit in September, he’s advocated for the unit to push into fully-autonomous driving capabilities instead of simply another iteration of semi-autonomous driving, which is already on the road in some vehicles.

In trying to master self-driving cars, Apple is chasing a holy grail within the industry. Tech and auto giants have spent years on autonomous vehicles, but the capabilities have remained elusive.

Tesla Inc., the market leader in electric vehicles, is still probably years away from offering fully autonomous cars. Alphabet Inc.’s Waymo has suffered a rash of departures in its efforts to develop the technology. And Uber Technologies Inc. agreed to sell off its autonomous-driving division last year.

Rumors abound as to what the car will actually look like. Some reports say there may be no steering wheel (yikes), others indicate that passengers may actually face each other (like in a limo), while others are more pedestrian – no pun intended. (Think iPads mounted on the dash.)

We’ll have to stay tuned to see whether this pans out or not. And while I wouldn’t buy Apple for this reason alone, let’s face it… buying Apple is rarely a bad idea.

Still, as I mentioned last week, rather than trying to pick the winners, we can play the growing EV trend by investing in things like lithium. After all, we can’t have EVs without batteries, and we can’t have batteries without the silver-white metal.

What’s more, demand for lithium is outstripping supply, which is great news for investors who want to get in on this trend while it’s still in the early stages. For details about our tip lithium play, click here now.

This Could Be The Next Trillion-Dollar Company

For our final item today, I want to turn your attention to a company that has perhaps benefited from the growing demand for advanced chips more than any other.

I’ll be honest with you. This is a stock I’ve completely missed the boat on up to this point. I’ve followed it casually for years, only to watch it climb all the way up to an $800 billion market cap.

But as we’ve pointed out time and time again, you shouldn’t let that prevent you from jumping on while you still can. In my opinion, this will be a trillion-dollar company in the not-too-distant future.

If you follow the financial media at all, you’ve probably heard of Nvidia by now. But my colleague Jimmy Butts recently wrote an excellent profile on the company, and I felt compelled to share some of the details with you.

As you may know, NVDA makes graphic processing units (or “GPUs”). And they’re the gold standard of the industry.

As Jimmy points out, gamers love them. They’re also used in cryptocurrency mining. And scientific computing. And artificial intelligence. And autonomous vehicles. Augmented reality, virtual reality… you get the idea.

Just about any major tech trend you can think of, Nvidia products are typically used in some form or another, and they’re considered the Rolls Royce of semiconductors.

Being the top dog has its privileges. One of those is outstanding sales growth…

Just five years ago the company generated $5 billion in sales. Last year, the number swelled to more than $16.6 billion, a 27.2% compounded annual growth rate. And the company is on track to tack on $25.8 billion in revenue this year. 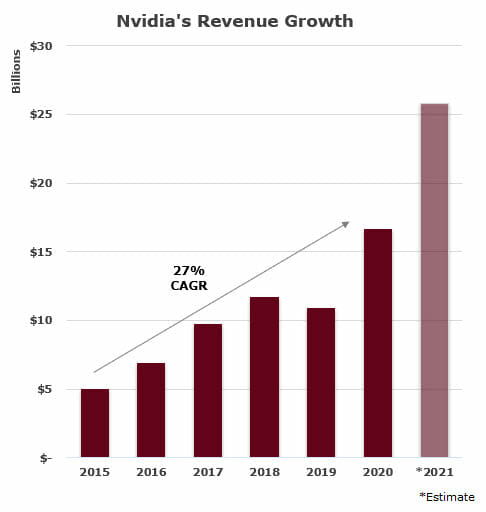 The company pulled in more than $4.3 billion in net income last year and has grown its bottom line at a nearly 50% average annual clip over the last five years. 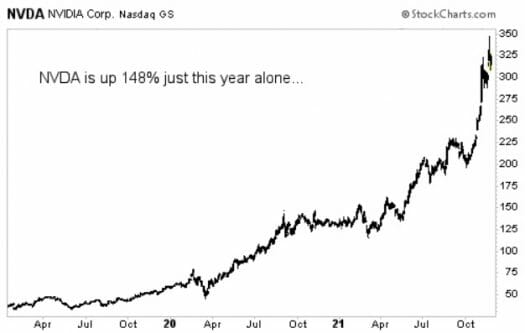 As Jimmy points out, NVDA’s top-of-the-line products and stellar financials have been massive tailwinds, pushing shares to new highs.

My advice: Don’t let the chart scare you away. This will be a trillion-dollar company someday, but it may be a volatile ride to get there. If you can stomach the ride, this is a stock you will want to own for the long haul – and possibly buy on any major dip.

P.S. As chief investment strategist of Velocity Trader, my colleague Jim Fink has devised trading methodologies that reap market-beating gains, regardless of economic ups and downs, or Covid, or geopolitical crisis, or whatever else you can think of…

Jim has put together a new presentation that shows smart investors how to use his strategy to make massive investment gains in a short amount of time. Click here now for access.