Well, it finally happened. Omicron decided to make a visit to our house after the holidays. Don’t worry though, we’re doing fine… thankfully, we had our vaccinations earlier this year and seem to be on the mend.

Meanwhile, there’s a slew of important economic news to digest from the past few days.

The unemployment rate dropped to 3.9%, down from 4.2% in November. About 199,000 jobs were added in December, another disappointing miss, considering about 422,000 were expected by economists. Remember, we are still about 3.5 million jobs short of where we were before the pandemic began.

Today, the Bureau of Labor Statistics reported that the Consumer Price Index (CPI) rose 7.0% year-over-year in December – the biggest increase since 1982. That came after Fed Chair Jerome Powell sat down before Congress in his renomination testimony on Tuesday. He told the Senate Banking Committee that, “If we see inflation persisting at high levels, longer than expected, if we have to raise interest rates more over time, then we will.”

We’ll dive into the ramifications of all of this later this week. In the meantime, I want to pass along this essay from Nathan Slaughter.

Today, I want to revisit an asset class that provides both income and stability.

This overlooked group has been fertile ground for profitable High-Yield Investing recommendations over the years. And given the record-low interest rates thanks to the Federal Reserve, it’s coming back into favor.

These hybrid securities may technically be a type of equity, but they walk and talk a lot like bonds. And with an average yield of 5%, they pay about 10 times more than your typical money market fund.

If you haven’t guessed, I’m talking about preferred stocks.

Safer Than Stocks, With Higher Payouts

​Just as with common stocks, these securities represent a form of ownership in a business. But they don’t carry voting rights. Instead, they offer a perk that can be far more valuable: dividend yields that are two to three times higher.

Take Bank of America (NYSE: BAC) for example. Common shares of BAC earn quarterly dividends of $0.21 per share, which works out to a yield of 1.7% at current prices. Nothing wrong with that (sure beats a 10-Year Treasury).

But the company has also issued shares of preferred stock (BAC-PL) with a coupon of 7.25%. Those distributions are made quarterly in January, April, July, and October. As you might expect, this lofty yield has attracted many buyers, driving the stock above its $1,000 face value to a current price of $1,431. 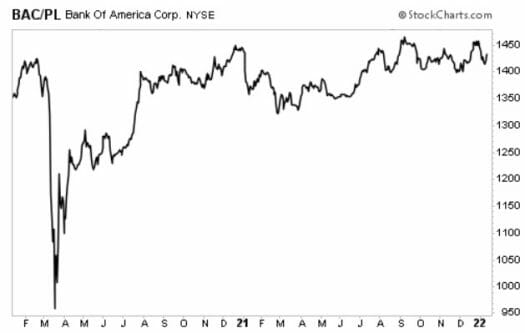 Preferred coupon payments are always tied to the original face (or par) value and don’t fluctuate with changes in the share price. So today’s investors would be pulling down a yield of 5.1% ($72.50/$1,431). That’s below the original coupon of 7.25% — but still three times the 1.7% payout on the common shares.

What’s the catch? There’s not one, although there are some important considerations.

For starters, preferred stocks behave more like bonds, which means they are more sensitive to interest rates and perceived credit quality than the company’s underlying sales and profits.

Whenever a company reports outstanding earnings that blow away estimates, the common shares typically bolt higher. But the preferreds don’t directly participate in the profitability or growth of the business, so they might not have any response at all. And while common share dividends can increase in prosperous times, preferred share dividends are essentially fixed.

The flip side is that preferreds aren’t as vulnerable when the economy tanks and/or earnings slump. And if the harsh conditions necessitate a cut in the common stock dividends (a frequent occurrence) the preferred distributions usually continue without any interruption.

A common stock gives investors a way to fully share in a company’s success, but they must also feel the sting of any failure. The preferred route means less appreciation potential if the business performs well, but milder losses in downturns — and with greater upfront yields.

It’s not unusual for preferred stock with a $25 par value to stay inside a narrow band (from, say, $23 to $26 per share) and rarely deviate outside. As with bonds, rising rates can drive preferred stock prices downward in the secondary market. But if you hold to maturity, the full face value will eventually be repaid.

These characteristics generally make preferred stocks safer than common stocks. They are somewhat riskier than bonds – but tend to offer richer payouts as a result. In fact, they are currently paying the highest rates of any investment-grade asset class.

Preferred Stocks Come In Many Flavors

That doesn’t mean that preferred dividends are guaranteed. They can be postponed in times of extreme financial distress. But even then, there is a silver lining. In many cases, the missing quarterly dividends must be paid and caught up at a later date when financial conditions improve. So if two payments were skipped in a bad year, preferred holders might get the equivalent of six the next.

This class is called “cumulative” preferreds.

With non-cumulative issues, any missed payments don’t necessarily accrue. But they may have another protective clause. If preferred share dividends are suspended for some reason, common share dividends must also be restricted until payments have first been reinstated on the preferred. Under this provision, if there isn’t enough cash to pay both groups – the preferred holders go to the front of the line. Incidentally, the same is true with regard to any residual claim on assets in the event the business is liquidated. While preferred stocks are subordinate to bonds in the capital structure, they rank ahead of common stocks.

You’ll notice that some preferred stocks might not mature for 30 to 40 years. Others are “perpetual” in nature and have no stated maturity date. So these instruments are structured to provide many years of stable, dependable income.

Be aware, though, that some are “callable,” meaning the issuer can redeem the instruments at some point in the future for full face value. This is most often done during periods of falling interest rates so the company can refinance. Call features usually benefit the issuer rather than the investor. Callable preferreds present some uncertainty for investors, especially those who purchase at a premium. For example, you might see a preferred stock trading at $26 with a par value of $25. In the event the stock is called, the investor would only be entitled to receive $25, potentially losing $1 per share.

That modest loss might be more than offset by higher dividends in the interim. Still, don’t be caught off guard by call features.

Keep in mind, too, that some preferreds (like BAC-PL) are convertible into common shares. Unlike traditional preferreds, convertibles do give investors an opportunity to participate in the growth of the business over time. And then there’s a whole sub-sector of unique preferreds whose coupon rates start out fixed for a few years and then switch to a variable. These can be especially valuable during periods of rising rates.

How To Invest In Preferred Stocks

The point is, preferred stocks come in many different flavors. And there are countless options for investors, from individual securities to a whole plethora of funds. For some, a low-cost exchange-traded fund (ETF) such as iShares Preferred & Income Securities (NYSE: PFF) does the trick. It offers a healthy payout of 4.5% and a respectable track record of either holding up or rebounding quickly in market downturns. 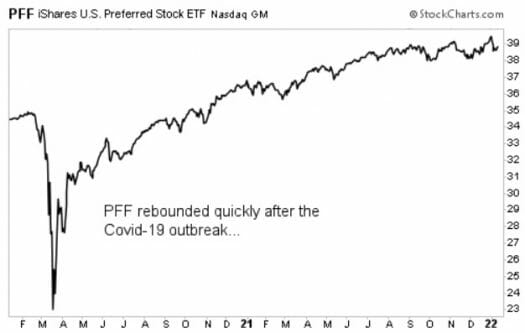 You certainly can’t go wrong with PFF, but for this asset class, I prefer an actively managed closed-end fund overseen by veteran managers and credit analysts who know how to sniff out trouble and exploit pockets of opportunity. These funds can also utilize leverage and other special tactics to enhance income and total returns.

Plus, it’s important to understand that traditional exchange-traded preferred stocks comprise only about a fifth of this $1 trillion global market. They are often referred to as the retail market. The other 80% (some $800 billion) only change hands over the counter between institutional investors.

For example, over at High-Yield Investing, we own a fund from a boutique investment firm that specializes in preferreds. It’s pretty much all they do. Unfortunately, I can’t share its name with you because it wouldn’t be fair to my subscribers. Nevertheless, I highly recommend you look into this space — especially if you’re looking for the stability of fixed income but want to earn a higher yield.

In the meantime, if you’re looking for my absolute favorite high-yield picks, then I invite you to check out my latest report…

I’ve identified five “bulletproof” income payers that have not only held up during periods of uncertainty — but continued to reward investors with higher payouts and massive gains. Go here to learn more now.