Markets are closed today in observance of Good Friday. With market-moving headlines surrounding war, inflation, the Fed… oh yeah, and a gigantic buyout offer from a certain mercurial billionaire, investors could likely use the break.

But rather than skip today’s issue, I wanted to pass along an interesting bit of analysis from my colleague Jimmy Butts.

As you may know, we’ve been pretty bullish on the energy sector for a while now around here. Credit were credit is due: our colleague Nathan Slaughter has been leading the charge — practically calling the bottom of oil prices in the spring of 2020. And then ringing the bell again last winter before current massive bull run.

But as Jimmy explains below, despite the massive run-up, higher energy prices are likely sticking around for a while. And while that may mean more pain at the pump, it also means investors still have an opportunity for gains…

The rise and fall of the price of oil and gas have been well documented. Just in the last two decades, we’ve seen the price of oil collapse 50% only to explode more than 720% higher. Then immediately freefall 75%. Then triple, then tumble 72%… only to later spike 150% and then retreat 76%. The most recent spike has been over 500%. 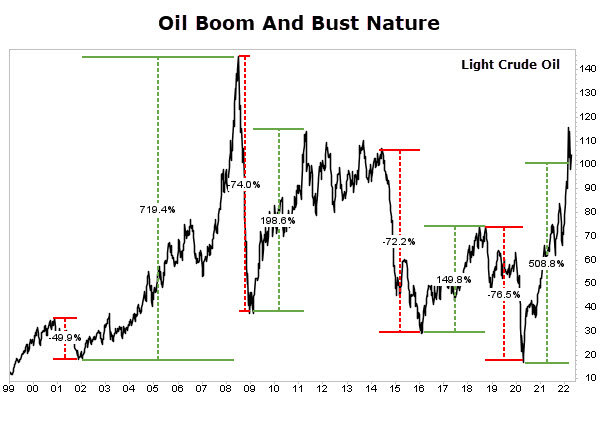 If you’ve been trading or investing in the market, you may be aware of the energy sector’s boom and bust nature. But it is always good to be reminded of just how violent it can be, and just how quickly things can go from good to bad then back to good again.

When times are good, companies in the energy space can produce spectacular gains. Another boom cycle is unfolding before us… and while the price of oil and the energy sector has soared the party is far from over.

I think there’s more upside ahead. Here’s why…

Even if you haven’t paid attention to the spot price of oil, you’ve likely seen it at the gas pump. The price of a barrel of oil trades for more than $100 and reached nearly $130 last month. This is a far cry from when the price of oil briefly traded below $0 exactly two years ago.

Natural gas prices have climbed above $7, which is nearly triple what it fetched a year ago.

While this isn’t good news for consumers as we pay more at the pump and to heat our homes, it’s fantastic news for oil and gas companies. Sales, profits, and margins soar.

Typically, when oil prices climb, oil and gas producers become flush with cash. They crank up production, buy or lease more land, and explore for more oil. After all, you have to make hay while the sun’s shining, right?

Of course, as we’ve seen over the years this eventually leads to a supply glut and prices come crashing down.

But this time? Oil and gas companies have not cranked up production. Maybe they’ve finally learned their lesson?

Whatever the case is, it means higher prices are here to stay… at least for now.

For the first time in a long time, the amount of gas in storage is now below average (the blue line is current storage and the gray line is the five-year average). 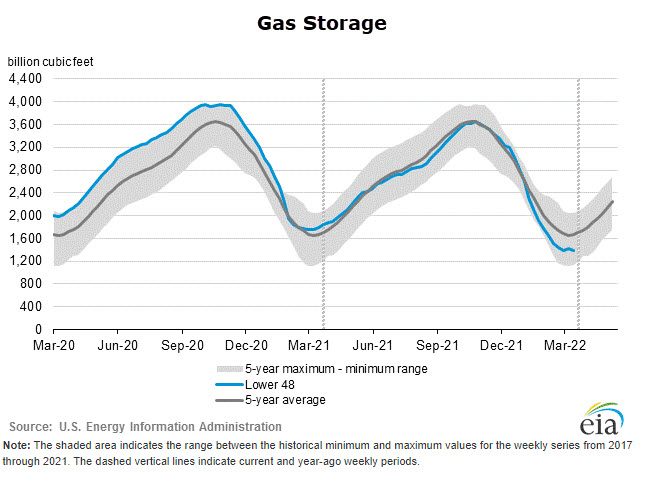 The lack of gas in storage means that any surplus gas we are producing is being used or exported. Not stored. (Yes, we have increased exports to Europe after Russia invaded Ukraine.)

But this is Econ 101, more demand than supply means higher prices.

Again, you’d think these higher prices would mean energy companies would open up the spigots, or be actively looking for and developing oil and natural gas. But they’re not…

This second chart is the Baker Hughes Rig Count. It shows the number of active drilling rigs in the United States and Canada. And while it has climbed sharply from its Covid-19 lows, it is still way below its long-term average, and previous highs. 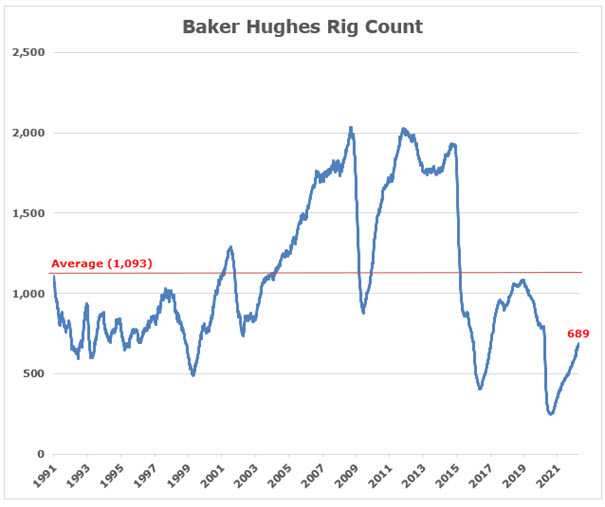 Today, in North America there are 689 drilling rigs out searching for natural gas and oil. That’s 66% less than the operating peak in 2011 when 2,026 rigs were at work. It’s also 36% less than its peak pre-Covid.

I’ve been on the record for being bullish about the energy sector since the beginning of the year. But if your portfolio chock full of oil and gas companies, it’s important to understand the dynamics at work. And history also tells us that big booms are followed by massive busts.

Just take this as a word of caution. You don’t want to be the one holding the bag when it’s all over. Use a sell signal (like a trailing stop). And when that sell signal hits, don’t hesitate. Sell.

The bottom line is that even though many energy stocks have doubled and tripled over the last couple of years, there are more gains to be had.