We got a fresh reading on inflation numbers today.

In case you didn’t see the headlines, I’ll give you the good part first: prices seemed to rise at a slightly slower pace in April compared to March.

The bad: Prices still rose by 8.3% last month, compared to 8.5% in March. Projections from economists were were looking for an increase of 8.1%. 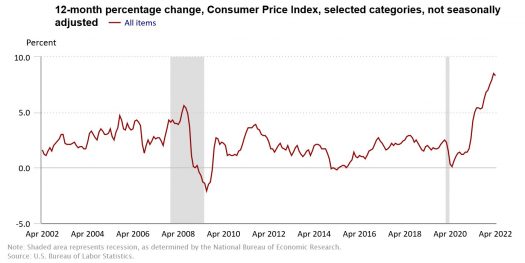 Now for the ugly: As of this writing, the market doesn’t seem too happy about the result. The S&P 500 is down by about 1.6%, after showing positive results earlier in the day. The Dow Jones Industrial Average is down by nearly a percent. And the troubles for tech stocks continue, as the tech-heavy Nasdaq is down by more than 3%.

The point is, it’s too early to know if the inflation rate has peaked. Much of the deceleration came from energy prices, which have been volatile over the past few months, thanks to the Russian invasion of Ukraine. And food, in particular, saw some troubling increases on a month-to-month basis.

But at some point, American consumers will grow tired of paying higher prices and begin to curb spending. (In fact, my colleague Jimmy Butts thinks this already beginning to happen…) And since consumer spending is the engine of the U.S. economy, this could drag down economic growth – and possibly lead to recession (or even “stagflation”).

The Federal Reserve is determined to not let prices get out of control, however. The central bank has a mandate limit inflation to about 2% over the long-term. That’s why the Federal Open Market Committee hiked the benchmark rate by 50 basis points last week, rather than the usual 25 basis points. And with a two hikes (for a total of 75 basis points) under its belt so far this year, expect to see more increases in the months ahead, starting in June.

In fact, according to Reuters as of a few days ago, the futures market was signaling a 75% probability of a rate hike of 75 basis points, despite Jerome Powell seemingly taking that off the table in recent remarks. The futures market is also anticipating more than 200 bps of hikes for 2022 in total, bringing the benchmark rate to 2.85%.

A Record New Rate For I Bonds…

Coincidentally, on May 1 the Treasury Department announced the new rate for Series I Savings Bonds. If you missed where my colleague Jimmy Butts discussed these unique vehicles for beating inflation, you can go here.

As a refresher, I Bonds were launched in 1998. Like other Treasury bonds, the U.S. government directly issues and backs these investments. Rates are pegged to the Consumer Price Index and are reset every six months, on May 1 and November 1.

Remember, you can put up to $10,000 into these bonds per investor (so $20,000 if you’re married). As mentioned previously, it may have been a better plan to purchase the I Bonds before the end of April. That way, you would be sure to lock in a rate of 8.4% for the next year.

We said this because the while it seems like inflation will run hot for the rest of this year, the truth is we just can’t predict what it will be in six months. Still, 4.81% locked in for six months isn’t bad. And the November rate is still likely to be high.

Regardless, as Jimmy said in his rundown of I Bonds, they are “as close to a ‘free lunch’ as you’ll get in the investment world. “

If you haven’t already put some cash into I Bonds, you may want to consider it now. You can purchase them directly through TreasuryDirect.gov.

Baby Formula Shortages Across The U.S.

If you’re the parent of an infant (or about to be, like me), then you may have noticed that it’s a little tough to get your hands on some baby formula.

I spotted this at first on a recent trip to the grocery store. Thinking it might just be confined to that particular store, I asked around among friends with small kids… and as it turns out, this is getting pretty serious…

As USA Today reports, roughly 40% of popular baby formula brands were sold out at retailers across the U.S. – and the situation is only getting worse.

It’s getting so bad that major retailers and grocery stores are implementing limits on the amount of formula you can purchase (usually three or four at a time). According to Datasembly, some metro areas (such as San Antonio, Memphis, Nashville, Des Moines, and Houston) have out-of-stock-rates of over 50%.

Abbott Nutrition issued a voluntary recall in mid-February on formulas made in its Sturgis, Michigan plant. The Food and Drug Administration issued preliminary findings in March, citing the plant for failure to maintain sanitary conditions and procedures.

The plant remains closed while the FDA continues its investigation. Abbott and other manufacturers, meanwhile, have been trying to ramp up production to keep up with demand.

P.S. My colleague just released another BIG prediction about cryptocurrencies…

Jimmy Butts and his team think cryptocurrencies will surge again in the coming months. But here’s the thing… the big winner won’t be Bitcoin, Binance, or Ethereum. While those cryptocurrencies could do well, we think there’s another one with a lot more upside potential for new investors. It’s 321 times faster than its prime competitor and could surpass it in value…