My Plan To Profit From Amazon’s Next Big Move…

Editor’s Note: Since we moved out to the country, we’re growing accustomed to doing things a little differently.

One difference is that our area is filled with mom-and-pop retailers. And aside from the friendlier attitudes you’ll get compared to the big city, another welcome surprise is that when you’re doing business, you’ll often be given two prices…

The cash price and the card price.

That’s because many of these folks are getting squeezed. If it’s not rising supply costs, it’s hard-to-find (and keep) labor. If it’s not that, then it’s the credit card processing fees. Hey, margins are tight, and you’ve got to do what you can to get by.

I bring this up because, as you’ll read below, my colleague Nathan Slaughter recently encountered a similar situation — and it perfectly ties into his prediction that Amazon is about to pull off one of the biggest, most “shocking” deals we’ve ever seen…

My Plan To Profit From Amazon’s Next Big Move…

After dinner the other day, I was checking the receipt before signing (never a bad idea) and ran across a curious line item. It was right there in between the tax and gratuity. I’m betting you’ve probably spotted one of these miscellaneous fees tacked on to a receipt from a local restaurant or retailer as well.

As it turns out, this is the merchant passing the credit card fees along to you and me. We all know there’s a processing fee involved every time we swipe the plastic (or sometimes tap these days). How else do you think Visa generates $12+ billion in annual profits?

For years, these transaction charges were largely invisible to consumers and paid for entirely by store owners. But in the wake of new laws, thousands of locations across the country have begun adding 3% or 4% back to the bill to cover card processing fees. Once rare, it has become common practice in many states.

It’s hard to blame them. Picture a small mom-and-pop pizzeria that does $300,000 in yearly credit card sales. At an average of 3%, their card processor would deduct $9,000 in fees over a year. That’s a meaningful hit to the bottom line.

So do the math on a national big-box chain like Home Depot, which hauls in that much every single minute of every single day. Across the country, U.S. merchants handled $7.6 trillion in credit card sales volume last year. And all those transactions generated approximately $116 billion in fees for card processing networks.

With more purchases going through cash-less, digital routes, this total is headed nowhere but up. Of course, when you think of e-commerce, one name immediately springs to mind: Amazon.

The undisputed king of online shopping is the world’s second-largest retailer, generating $470 billion in yearly revenue. That’s over $1 billion per day. And just think, nearly every one of those sales incurs a credit card fee.

You better believe it. 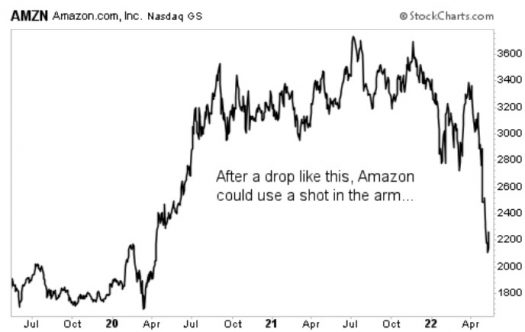 Prediction: Amazon Will Get Into The Credit Business

Amazon has certainly had its squabbles with card processors. Earlier this year, the company threatened to block Visa cards issued by U.K. banks from its website following an increase in fees. Amazon is well-known for throwing its weight around at the negotiating table. But Visa isn’t one to back down either and accused the retailer of limiting consumer choices.

After some tense back-and-forth, the two parties reached mutually agreeable terms and the ban was lifted. While specifics weren’t disclosed, it’s understood that Amazon pays considerably less than smaller retailers. Still, even at discounted rates, these fees can wipe out billions each year.

Of course, there’s more at stake than just shaving costs and adding a point or two to operating margins. Amazon is actively fighting for a piece of this lucrative business. Why do you think it launched Amazon Pay – to compete as a payments facilitator with the likes of PayPal.

The service, which has attracted more than 30 million users, allows internet shoppers to complete checkout transactions at third-party websites using their stored Amazon credit account information. Consumers love it because it saves time on repetitive data entry – no need to enter card numbers and mailing addresses over and over. Merchants like it because they can piggyback on Amazon’s special card processing discounts.

Clearly, Amazon already has its foot in the payments processing door. The company has also created its own co-branded credit card, the Amazon Prime card, which carries no annual fees and earns 5% at all Amazon properties, including Whole Foods.

These cards are stamped with the Visa logo. But what if there were a way for Amazon to cut out Visa entirely from the loop? It’s entirely within the realm of possibility. Not by acquiring Visa (which would likely get stonewalled by antitrust regulators), but by acquiring one of its scrappy rivals…

It’s not as crazy as it sounds. In fact, JP Morgan Chase (the largest issuer of Visa cards) has publicly acknowledged that it is mulling just such a strategic move. But Amazon may have its sights on this smaller player as well – not to mention around $90 billion in idle cash to go hunting.

What’s more, this is an industry that’s ripe for disruption. It’s one of the reasons why there are dozens of “fintech” upstarts, like PayPal and Square, competing in the payments industry.

The chance to cut out the middleman and disrupt this space might be too good for Amazon to pass up, which is why I think they’ll make a move sooner rather than later. When they do, it’s going to be a bombshell that will send waves through the financial media. And, of course, shares of the company in question will likely take off and never look back.