Jamie Dimon Is Worried… Fertilizer Prices Are Soaring… Plus: A Pick To Profit…

When Jamie Dimon speaks, it pays to listen.

As CEO of JPMorgan Chase, the largest U.S. bank by assets, the man knows a thing or two about the macro picture of the American economy.

And I hate to break it to you, but the guy is more than a little concerned. Speaking at a financial conference on Wednesday in New York, Dimon said he is bracing for a “hurricane” coming for the economy.

One primary reason: Quantitative tightening, or QT. The Federal Reserve is set to begin trimming its balance sheet this month, reducing its bond holdings to combat sky-high inflation.

For context, the Fed began purchasing long-term government bonds and mortgage-backed securities in an effort to soften the blow of the Covid-19 pandemic. The result: $8.9 trillion in assets on the books.

Now, the Fed will ramp up to reducing its bond holdings by $95 billion a month — and it will be on track to reduce its balance sheet by as much as $3 trillion over the next 3 years.

“We’ve never had QT like this, so you’re looking at something you could be writing history books on for 50 years,” Dimon said. Several aspects of quantitative easing programs “backfired,” including negative rates, which he called a “huge mistake.”

Central banks “don’t have a choice because there’s too much liquidity in the system,” Dimon said, referring to the tightening actions. “They have to remove some of the liquidity to stop the speculation, reduce home prices and stuff like that.”

The other reason Dimon cited is the war in Ukraine. Specifically, the impact it will have on commodities, primarily food and fuel. Here’s more from CNBC’s coverage:

“Wars go bad, [they] go south in unintended consequences,” Dimon said. “We’re not taking the proper actions to protect Europe from what’s going to happen to oil in the short run.”

Dimon predicted oil could hit $150 or $175 a barrel, something I’m sure drivers won’t be pleased to hear. But anyone who’s listened to our experts, who have said oil has more room to run, will likely nod their head in agreement.

Not known for being an alarmist, Dimon told the crowd, “You’d better brace yourself,” and that JPM is going to be very conservative with its balance sheet moving forward.

Fertilizer Prices Are Getting Out Of Hand…

While Dimon’s comments about oil got most of the attention in the press, note that he mentioned food as well. As I’ve pointed out before, Ukraine and Russia are both breadbaskets to the world, accounting for a substantial portion of global wheat output. Fertilizer, too — which is one (of several) reasons why fertilizer prices are skyrocketing. 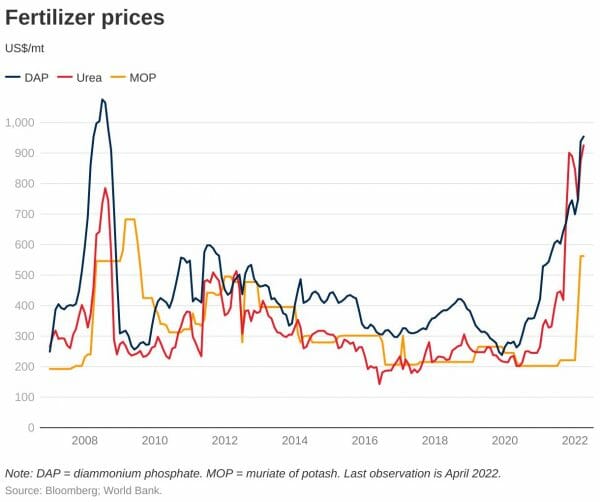 The World Bank recently reported that fertilizer prices have risen nearly 30% in 2022 alone. And that comes after an 80% hike in 2021.

Like many things seeing price increases or supply disruptions these days, the reasons are amplified by the conflict in Ukraine… Supply chain disruptions, surging import costs, sanctions on Russia (the #1 exporter of nitrogen and #2 for phosphorus and potassium), high natural gas prices (a key input for fertilizer), extreme weather events… you name it.

Add it all up, and despite higher crop prices, fertilizers are now at their least affordable levels since the 2008 global food crisis, according to World Bank.

If this trend continues, it will not end well. Recall that the last time prices were this high (2008), there was a global food crisis. And if the situation does not improve, we could see humanitarian emergencies in developing countries as well as additional global unrest.

To close today’s issue, I’ll hand things over to my colleague Jimmy Butts, who recently told his premium Maximum Profit subscribers about a way to profit…

Our Expert’s Pick To Profit From Rising Fertilizer Prices

Fertilizer is big business. The global fertilizer market is estimated to be north of $171 billion.

The fertilizer industry is also critical for food production. Without fertilizers, the world’s crop yields would be cut in half.

The Mosaic Company (NYSE: MOS) is one of the world’s top producers of phosphate and potash — two of the three most important nutrients in agriculture. If you throw fertilizer on your yard it’s comprised of nitrogen, phosphorus, and potassium. Potassium is derived from potash.

Mosaic has operations in the United States, Canada, and Peru. Its primary facilities are in Florida, which produces phosphate, and Saskatchewan where it mines for potash. Its products account for 73% and 40% of North America’s phosphate and potash annual production, respectively.

That growth is expected to accelerate this year…

Estimates call for Mosaic to pull in over $19.4 billion in sales, which would represent a 56% year-over-year increase. Net income is expected to jump from $1.6 billion to over $4.3 billion.

Cash flow is expected to more than double to nearly $4.6 billion. 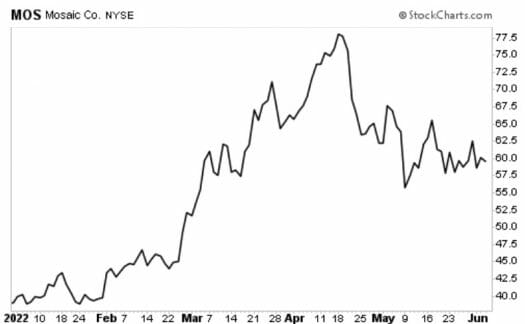 Nearly every commodity is surging — wheat, corn, soybeans, and even orange juice are all near highs not seen in years. Fortunately, Mosaic is also benefiting from the rise, as the prices of potash and phosphorous are also surging. This, in turn, has helped sales, profits, and margins.

If commodity prices dip that could put a damper on shares. Also, currency risk exposure to Brazil could impact earnings. That said, higher prices and strong demand for fertilizer should continue to provide tailwinds for the stock.

Editor’s Note: If the market is giving you anxiety these days, consider turning to our in house “stock doctor”…

Our colleague Dr. Joe Duarte just revealed his secrets in a special, one-of-a-kind event. And he showed viewers that you don’t have to buy up stocks, options, or futures… You don’t have to gamble your money on cryptocurrencies… And you certainly don’t have to hide bars of gold under your floorboards, either.

There’s a much easier and faster way to get ahead (and stay ahead) of inflation in 2022 — and it all starts with one simple move.