Another Disappointing CPI Number… The Fed Back In Focus… A Way To Profit From Falling Gas Prices?

I bet you didn’t need the Bureau of Labor Statistics (BLS) to tell you that inflation was still red-hot.

But the market did (and possibly the Fed, too?)

On Tuesday, the BLS reported that the consumer price index (CPI) rose more than expected in August. 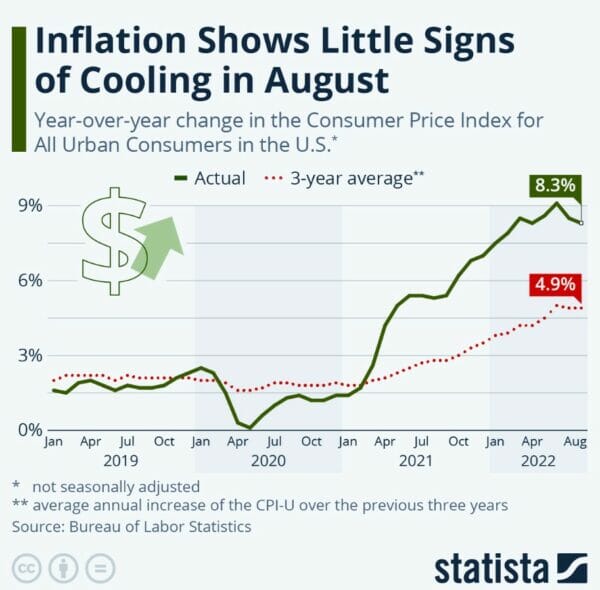 This came despite gas prices falling for 91 straight days. The average price of a gallon of gas peaked at $5.02 in June, falling to about $3.70 by the day of the report’s release. 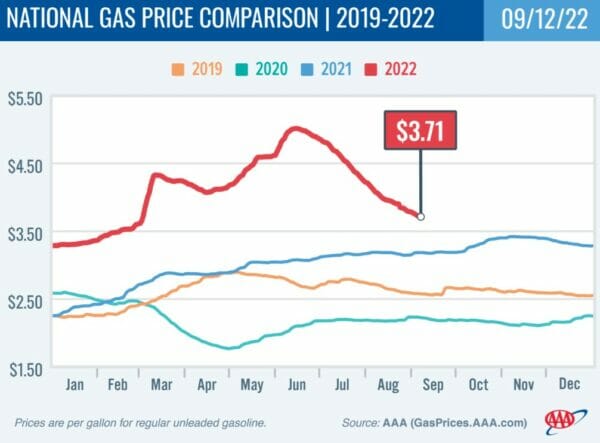 Instead, the main culprits for the increase were shelter, food, and medical care.

Core CPI, which strips out food and energy prices, also outpaced expectations, rising 6.3% over last year and 0.6% over the previous month. Expectations were calling for 6.1% and 0.3%, respectively.

This troubling report shows the serious nature of the problem. And the markets responded on Tuesday. The Dow Jones Industrial Average fell by 2.6%, the S&P 500 by 3%, and the Nasdaq by about 4%.

As evidenced by his recent Jackson Hole speech, Fed Chair Jerome Powell and the rest of the Federal Reserve are starting to get the message. He said raising interest rates would bring “some pain” to Americans, but the alternative (not subduing inflation) would be even worse.

And to show you that this shouldn’t be a partisan issue, consider this piece in Bloomberg. It cites a series of tweets from Larry Summers, former Treasury Secretary under President Obama and the President Emeritus of Harvard University:

“Today’s CPI report confirms that the US has a serious inflation problem.

He also said that the target benchmark rate will likely need to be raised to close to 4% (the target rate is 2.25%-2.5%). And it “seems to me to be better to move rapidly than slowly.”

Remember, it’s part of Powell’s mandate to get inflation down to 2%. And that’s not likely to happen soon unless drastic (and painful) measures are taken. I’ll leave you with this gem from Summers:

“It is highly implausible that inflation will fall to 2 percent without unemployment exceeding 4.5 percent. Yet this is the most pessimistic view among 19 members of the FOMC. Dangerous group think.”

We’ll look for more clues as the days get closer to the meeting. Here lately, we’ll usually see a trial balloon in the form of “insider sources” speaking to the Wall Street Journal.

I plan to touch on the ramifications of this on the housing market in these pages soon. (The average 30-year mortgage rate topped 6% for the first time since 2008 in anticipation of more rate hikes.) But in the meantime, I’m going to hand things over to my colleague Jimmy Butts, who has an interesting idea for how you might be able to profit from falling gas prices…

A Surprising Way To Profit From Falling Gas Prices

There’s been a lot of talk about gas prices lately. And that’s understandable, of course.

After reaching record highs, benchmark West Texas Intermediate (WTI) crude prices have fallen under $90. Gas prices, meanwhile, have retreated to an average of $3.70 per gallon on Wednesday, according to AAA. 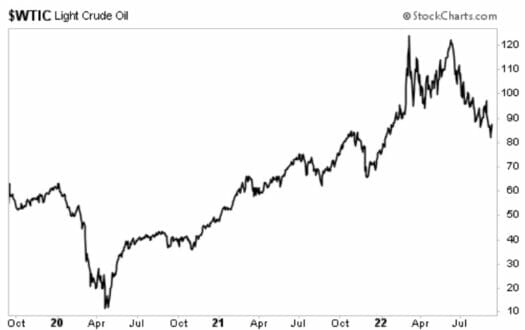 The reason has little to do with more supply or easing geopolitical tensions. In reality, it’s more about demand — i.e., the economy is slowing.

This leads me to something interesting you might not know…

Most people — some Wall Street analysts included — think that gasoline stations profit most when gasoline prices are high. But that isn’t necessarily the case. Gas stations make about the same amount of money on a gallon of gas, whether prices are low or high. The real money maker for gas stations is folks going into the store to get a snack or drink or purchase tobacco.

This is a somewhat recession-resistant business. That’s why I’ve had my eye on a company known as a “low-cost” gas station operator. What’s more, most of its locations happen to be located at the nation’s largest retailer (also known for its low costs).

A Momentum Pick With Recession-Resistant Traits?

Murphy USA was spun off from the Murphy Oil Corporation (NYSE: MUR) on September 3, 2013. Murphy Oil retained all its oil and gas exploration and production assets. Murphy USA took all the gas stations and convenience stores.

At last count, Murphy USA operated 1,695 stores in 27 states. They operate under Murphy USA, Murphy Express, and now QuickCheck — a company they acquired in January 2021, primarily in New Jersey and New York.

Most of the company’s properties are located near Wal-Mart stores, as the company collaborates with the giant retailer to offer customers discounted and free items based on purchases of qualifying fuel and merchandise.

As mentioned earlier, MUSA is well-known as a low-cost gasoline provider. This is especially helpful as fuel prices are still high, and consumers feel pinched overall. If we do indeed slip into a full-blown recession, it should hold up better than the competition.

Remember when I said earlier that gas stations usually make about the same amount of money regardless of the prices?

One caveat of late was the Covid-19 pandemic. You might recall that oil prices briefly fell below zero as the pandemic unfolded and stay-at-home orders were issued. Well, gas stations weren’t exactly giving away gas during this time, so their margins on gas did expand.

While a few percentage points might not seem like a lot, that bump adds millions into the company’s coffers. To see what I mean, let’s look at 2019 financials…

For 2022, the company is on track to pull nearly $1 billion in cash flow. That’s huge. These spectacular financials and folks hitting the roads and traveling after being stuck at home provide nice tailwinds for shareholders. 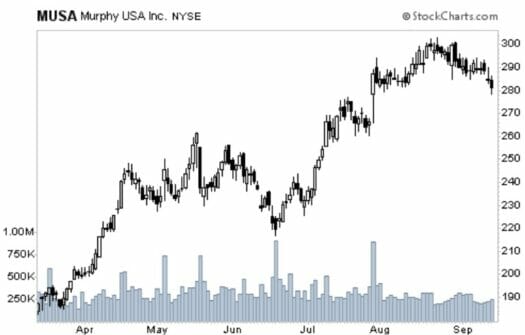 As you can see in the chart above, the stock recently hit new 52-week highs. This shows the stock has strong momentum, and that should continue as long as gas prices keep dropping.

Remember, contrary to what most people think, when gas prices are low, it actually benefits gas stations because more people will usually buy things in the convenience store. But if economic conditions erode in a big way and people cut back on traveling, or if gas prices reverse course and begin climbing again, that could put a damper on sales.

If you add it all up, MUSA looks like a solid defensive play with that could have considerable upside.

In the meantime, I recently uncovered an “off the radar” investment that’s developing one of the most disruptive technologies we’ve seen in years…