The pain in equity markets continues.

The package delivery giant announced a big-time earnings miss and pulled its full-year guidance. I’ll skip the details, but analysts at Deutsche Bank are calling it “the weakest set of results” they’ve seen in more than 20 years. Shares were down by as much as 21% on the day. Ouch.

It’s starting to look more and more like a global downturn may be developing. Oh, and then there’s that little matter about the Federal Reserve likely hiking interest rates by another 75 basis points (at least) next week.

To make some sense of what’s going on — and how investors should respond — I turned to my colleague Jimmy Butts, Chief Investment Strategist of Capital Wealth Letter. (My questions are in bold.)

Jimmy, first of all, I have to give credit where it’s due. You correctly predicted that the rally last month wasn’t meant to last. So what’s going on with the market now?

Thanks. Of course, I wish I was wrong, but I guess I’ll take it. Back on August 18, I first began talking about two key levels in the S&P 500 that we would need to keep an eye on. I said:

“Our first significant support level will be right around 4,150. If it falls below that, then the next level of support comes in at 3,900.

If we look at the chart below, you’ll see that once the market broke below 4,150 (which was our first level of support, it quickly went down to that level. 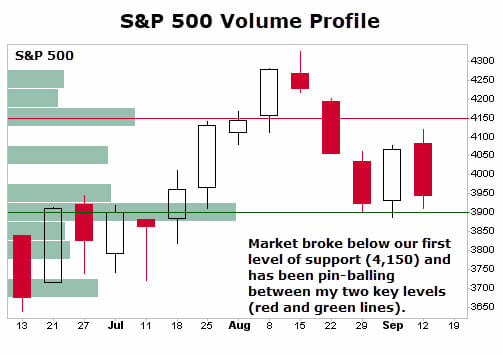 That 3,900 level has been pretty staunch, acting like a concrete floor for the market. I said that would continue to be a key support level because, if we drop below, we will surely retest the June lows (around 3,636).

Last week, I talked about the latest inflation numbers and the Fed’s likelihood of announcing another big rate hike. Is this what’s holding the market back?

All the focus has been on inflation and interest rates. That’s not surprising, as these two directly impact consumers.

To see what I mean, take a look at the chart below.

The Fed is already selling some of its assets, but this is the month when things really start to escalate. The central bank will begin trimming $95 billion per month off its books. That means the little curve in the chart above is about to get a lot steeper.

This topic won’t get the headlines, but it is very important to keep in mind.

You recently told your readers about what the “smart money” is doing right now. Care to share the details?

Sure, I’ll give a brief summary.

According to Vanda Research, individual investors are sitting on an average paper loss of 27% this year. Despite that horrendous performance, the “buy the dip” frenzy continues…

On Tuesday, stocks experienced their worst fall in two years. The S&P 500 sank 4.3% on the day, while the Dow shed more than 1,250 points and the tech-heavy Nasdaq closed 5.2% lower. The selloff came on the heels of Tuesday’s hotter-than-expected inflation report, which clocked in at 8.3% in August. That stoked fears of aggressive interest rate hikes from the Federal Reserve.

Buried amidst that inflation data, poor economic outlook, and the stock market’s worst day in two years, retail investors must have found something they liked.

They scooped up a net of $2 billion of U.S. stocks and exchange-traded funds on Tuesday.

In case you’re wondering, the S&P 500 went on the slide another 9% in the month following that May 5 spending spree.

Will this time turn out any different for retail investors? Only time will tell…

But you can bet that retail investors are hoping this latest market plunge is the last. They continue to feverously average down — typically not a smart move when trading — looking for a light at the end of the tunnel (and for their portfolio performances to improve).

I will say that you have to hand it to them. Retail investors have shown a willingness to take a lot more punishment before they give up. While they could be right this time (unlikely), it might be wiser to follow the “smart money,” which was clearly dumping stocks on Tuesday.

The smart money has been quickly building up a short position in the S&P 500 over the last month. Just take a look at the chart below, which comes from the weekly Commitments of Traders (COT) report.

This report (released each Friday) provides a breakdown of how large money managers, hedge funds, and speculators are sizing up the U.S. futures markets. It is considered an indicator for analyzing market sentiment, giving traders an idea of which direction the “smart money” — hedge funds and money managers — are betting the market will go. 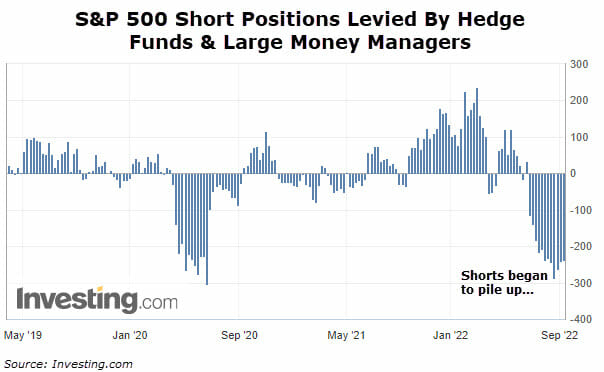 As you can see, the smart money had little faith in the recent bear market rally. As August arrived the shorts really began to pile on.

Seems to me that it might be wise to follow the smart money and tread carefully in this market.

On a similar note, for readers who may not know… what’s a “bag holder,” and why do we not want to be one?

A “bag holder” is an investor who rides a stock lower and lower, possibly even into bankruptcy.

They hope for the day a stock turns around, but it may never happen. They stubbornly hold, coming up with all sorts of reasons and excuses, right up until the day the stock is worthless.

Believe me, I’ve seen it happen before. And it can be absolutely devastating to your portfolio.

The reason people do this is simple. Too many people hold on to “hope” — meaning they hope for the day the stock gets back to even. They’d rather sacrifice their most valuable asset (time) before they’re willing to admit a mistake and move on to greener pastures.

Now, this may sound extreme. Instead, sometimes people just end up holding stocks that simply go nowhere. They could stay in business for years or decades, but shareholders don’t earn a dime on their investment.

There is another term I like to use for this. I call these “zombie” stocks.

Take shares of iconic blue-chip, International Business Machines (NYSE: IBM), for example. This is a classic zombie stock. Investors who purchased shares of IBM 10 years ago are “up” 2%. That’s downright terrible. In fact, once you account for inflation, they’ve lost money.

You could have invested in a “safe” 7-10-year Treasury Bond ETF and earned an easy double-digit return over that same time frame. 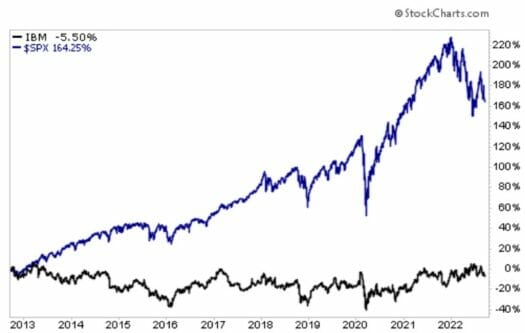 Any parting advice for readers trying to navigate the rough waters in this market?

Aside from inflation and the Fed, September and October have historically been difficult for stocks. We’ve seen major market corrections during these months in previous bear markets.

Will this time be different? I don’t know. But the way to will win in this market right now is to hit singles and doubles. What does this mean? It means to be strict and smart in your trades. Take profits off the table quickly.

Investing for the long-term may be a different story. But are you up double digits in a month on a trade? Take the profit.

I know this goes against my usual mantra of letting your winners ride. But we are no longer in a bull market. And if we want to survive a bear market, we just can’t afford to be greedy. If we can manage that, we can avoid suffering the same fate as other retail investors.

P.S. Jimmy recently uncovered an “off the radar” investment that’s developing one of the most disruptive technologies we’ve seen in years…