Ten years ago, individual investors could throw money at any mutual fund or ETF with the words “commodity” or “hard asset” in its name and collect outsized returns. That was then. This is now.

With the onset of the 2008 financial crisis, commodities entered a brutal deflationary spiral and subsequent decade-long bear market. And from the looks of it, that bear will continue to stumble around for a while. 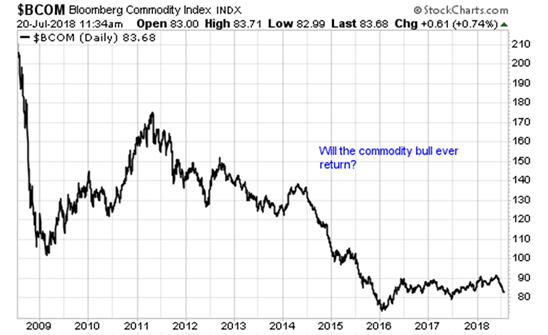 Investors hoping to make a buck on actually trading commodities — or seeing recovery in the blown-up assets they’re clinging to (along with false hope) — still have a hard row to hoe.

#-ad_banner-#But does that mean that there’s no money to be made in commodity-related stocks? Absolutely not.

It’s a mixed bag. Some commodity-related stocks, like energy, perform well as prices rise. Consumer staples stocks, on the other hand, perform better during periods of commodity price weakness due to lower input costs.

Metals? It all depends. An upward move in copper tends to indicate an expanding economy and is typically a bullish signal. Gold? Don’t get me started. Usually rising gold prices indicate economic or political uncertainty. Where copper has actual industrial applications and is massively consumed, gold is used as a storehouse of value, an inflation hedge or a hard currency. A while back, I let everyone know exactly how I felt about gold.

So, do we buy, sell, or hold commodities? There is no answer. Recently, there has been an impressive uptick in commodity prices. However, that move can be attributed to a weaker U.S. dollar resulting from the Trump administration’s trade war bluster (which is EXACTLY what it is). Unless we get some form of Venezuelan-style inflation that sweeps the globe, the chart I showed earlier will remain just as it is.

That being said, there is still money to be made in the commodity-related space.

Enbridge Energy Partners LP (NYSE: EEP) —  Oil prices have recovered significantly since being pummeled four years ago — from a panic low of near $25 per barrel to around $70 today. Naturally, most oil-related stocks were taken along for the ride regardless of whether their price was directly correlated with the actual commodity. Stocks in the midstream space were hit hard even though their business comes from storage and transportation rather than exploration and production (E&P). E&P companies are more profitable when prices are higher. Midstream companies rely on storage and transportation for their revenue.

Enbridge, one of my favorite names in the space, focuses on both transportation and storage. Although earnings per share (EPS) look to be flattish, a 4% revenue growth over the next year is projected. This should sustain the distribution, which is currently an attractive 12.65%. Units trade at $11.06,  a compelling 32% discount to their 52-week high.

Another beneficiary of the lack of a commodity bull is food giant General Mills (NYSE: GIS). Keeping America fed on a massive scale with Cheerios, Yoplait yogurt, Pillsbury baked goods, and other household names, the company should benefit from lower input costs. Most of the big food manufacturers raised prices back during the commodity boom as their margins were squeezed.

Since the rollover, they’ve been able to maintain pricing power and preserve efficiencies. General Mills sports steady margins of 16% which are expected to grow by 6.5% over the next two years. Not bad for an enormous, mature company. Even more impressive is the company’s return on equity (ROE) which clocks in at strong 40.7%.

Despite a stellar brand portfolio and strong metrics, the stock seems to be ignored by the market. Shares currently trade near their 52-week low at $44.82 and yield 4.37%.

Risks To Consider: The recent spike across most commodities, while mostly due to USD weakness, may continue for the near term. The Trump administration’s trade saber rattling is disruptive to some commodity markets and could keep pressure on the greenback. But, judging by the chart, the index has a lot of real estate to make up after a decade long drawdown.

Action To Take: While oil as a commodity trade is somewhat attractive right now, the broader space looks to be dead in the water for quite a while. Fits and starts are natural in any market, but the long-term fallout from the 2008 economic crisis and the hangover of a burst asset bubble still linger. Combined, both recommended stocks yield a blended 8.6%. A 12-to-18-month upward move of 7% is not unreasonable based on both companies’ fundamentals. The result would be a total return of just above 15%.

Editor’s Note: Back in December 2009, a small group of investors started a brand-new income program called The Dividend Trifecta. They’ve pulled in $113,922 in steady income over the years… and the number gets bigger every month. Some are making $1,900 per month… all thanks to The Dividend Trifecta. Click here to learn more about how investors just like you are cashing these checks every month.