How To Profit From This Megatrend

When in grad school, my professor gave an assignment for each of the students in the class to do a research paper on an American company. My choice was a relatively new public company called Microsoft (NASDAQ: MSFT).

After conducting weeks of research on the company and another two arduous weeks writing the paper, the report was submitted with little fanfare. Now, in those pre-Google days, I didn’t know if any grad student had ever won a Pulitzer Prize for research papers. But if it were possible, surely my paper stood a fighting chance.

Alas, it wasn’t to be. In fact, my professor wasn’t as impressed with my conclusions about the prospects for the newly public company. He gave me a C- on the paper and asked me if I had considered a career in truck driving.

#-ad_banner-#It was an inglorious moment. But from the ashes of this ignominious defeat, a decision was made to prove the good professor wrong. Without saying anything to anyone, I quietly purchased 400 shares of Microsoft stock. It was probably a stupid thing to do, but I figured I could still afford truck-driving school should the stock go south.

So what was the impetus for the stock purchase?

Despite my lack of investing experience, I was convinced that buying stocks on the verge of a long-term megatrend was a great way to grow wealth. Best of all, buying stocks this way didn’t require the need to rely on bull market rallies or perfect timing to deliver huge investment gains.

The Next Megatrend
Bloomberg sees sales of electric vehicles (EVs) increasing from a record 1.1 million units worldwide in 2017, to 11 million in 2025. They also expect EVs sales to surge to 30 million in 2030 as they become cheaper to make than internal combustion engine (ICE) cars. China will lead this transition, accounting for almost 50% of the global EV market in 2025.

Intel (NASDAQ: INTC) goes even further by claiming that self-driving electric vehicles will add an incredible $7 trillion to the global economy. While that number seems a bridge too far from an economic point of view, even if it is overstated by double, that’s still a massive economic boon for investors.

How To Profit From This Megatrend
You may be surprised to know the best way for investors to ride this megatrend isn’t with the automakers — especially Tesla (NASDAQ: TSLA). There’s just not enough differentiation between automakers for any brand to gain dominance in this sector.

Instead, investors should invest in companies supplying the ingredients to fuel this massive industry. Companies like Albemarle Corp (NYSE: ALB). To put it simply, Albemarle is my favorite EV stock — by far. And that’s despite the stock’s 23.9% decline YTD. 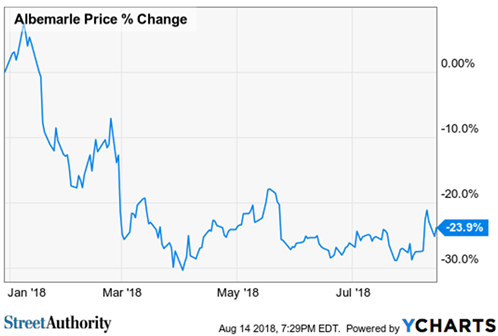 Albemarle is barely a large cap stock with a market cap of $10.55 billion headquartered in Charlotte, NC. And there’s no question the stock has been beat up by investors – mostly due to a downgrade earlier this year from Morgan Stanley.

But it’s important for trend investors to understand the myopic nature of unimaginative firms like Morgan Stanley. They invest for short-term gains — to generate large revenues for the firm. They’re not interested in long-term investing. That doesn’t pay the bills or generate huge bonuses for brokers

Go long on this lithium supplier. Over the next decade, the stock is going higher. Much higher. And it’s going to make lots of investors a great deal of money.

Cobalt Is Big, Too!
Cobalt is another fundamental ingredient to EVs. Unfortunately, the metal is most abundant in a part of the world fraught with political instability (Democratic Republic of the Congo).

But if you can stomach volatility for an extended period of time, Glencore (NASDAQOTH: GLCNF) plans to dominate the market. The miner produced 27,000 metric tons of cobalt in 2017. That’s roughly 25% of global production but only a third of their expected production over the next couple of years. 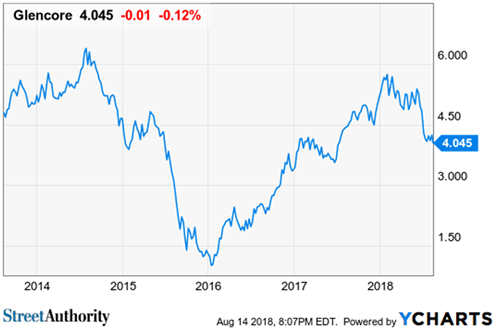 Will there be some volatility? Of course, but that’s the very nature of megatrend stocks. It happened to my Microsoft stock purchase back in the 1980s, too. You see, a few months after purchasing the stock, the stock was down by roughly 30%. The temptation was high to think my professor in grad school was right and a career in trucking was a good fit.
But at the end of the day, my portfolio got the last laugh. The 400 shares bought in 1986 have grown to more than 130,000 shares through stock splits and dividends. A meager investment in a megatrend returned more than 66,000%. And while I’m not saying Albemarle and Glencore will see similar results, the potential for large gains is strong.

Risks To Consider: Investing in long-term megatrends isn’t for the timid. By nature, these trends take years to fully develop, leaving investors hanging in the wind through the ups and downs of the economy. The EV trend is made even more difficult by requiring miners to operate areas of the world where political stability is the norm. This trend will play out ultimately, but expect lots of volatility over the next decade.

Action To Take:  Buy shares of ALB up to $100/share and GLCNF up to $4/share. Mitigate risk by using no more than 2% of your portfolio for either stock. These are long-term investments, so give the stocks a wide berth to move. Expect to hold your position for a decade or more.