We need to talk about China…

The world’s second-largest economy (behind the United States) has seen its stock market tumble. Signs of slowing growth, compounded by the ongoing barbs over trade sanctions with the United States, have caused its market to shed roughly 21% year-to-date, as measured by the Deutsche X-trackers Harvest CSI 300 China A-Shares Exchange ETF (NYSE: ASHR). 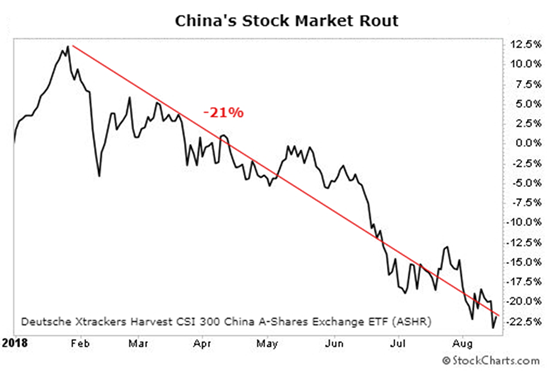 The concern over China and the threat of a trade war have also caused uncertainty in the stock market here in the United States. We’ve seen shares of tech stocks and commodity stocks swing double-digits in a day.

And, of course, my Top Stock Advisor subscribers and I have seen our own Chinese holdings come under pressure along with China’s overall market.
So, let’s address some of these problems and what we need to do with our direct exposure to China.

#-ad_banner-#First, China’s economy is slowing… but it’s still quite robust. According to the International Monetary Fund (IMF), in 2017 China’s gross domestic product (GDP) grew about 6.8%, about triple the United States’ GDP growth of 2.3%.

China’s hyper-economic growth days are perhaps behind it, but it seems that the economy is continuing to grow at a solid pace.

That brings us to the trade tariffs, which are likely the larger culprit to the country’s stock market woes. However, through all the rhetoric it’s anybody’s guess as to which way this will go.

The Trade War Begins?
But let’s start at the beginning. The trade skirmish began on January 22, 2018, when the United States imposed tariffs on solar panels and washing machines. Then in March it imposed tariffs on steel and aluminum. In June, the administration said it would impose tariffs on $50 billion in additional Chinese goods, with the majority going into effect on July 6.

China retaliated and placed tariffs on $50 billion in American goods, which also took effect at the beginning of July. Finally, on July 10, President Trump upped the ante and proposed tariffs on $200 billion in Chinese products… and is prepared to impose tariffs on another $200 billion on top of that. Not to mention the fact that Trump claimed he would up the tariffs from the original 10% to 25%.

How This Affects Investors
This tit-for-tat has taken its toll on both markets. Granted it’s hurt China’s market much worse than our own. But the escalation has definitely shaken the nerves of investors… and it’s taken a toll on popular China plays for U.S. investors — Ctrip.com (Nasdaq: CTRP), Alibaba (NYSE: BABA), and Tencent (OTC: TCEHY), to name a few — whether they’re directly affected by trade tariffs or not.

For example, Tencent — the Facebook of China, if you will — has lost about $175 billion in market value this year, and the company doesn’t have any direct ties to the trade war. But it’s been dragged down along with China’s overall stock market. And to compound the problem, when the company reported earnings on August 15, actual results fell short of analyst estimates. Shares closed the day down more than 7%.

But is it time to book profits and run? Not just yet…

Here’s what happened in the latest earnings report that caused short-sighted investors to flee.

China halted approvals for game licenses and blocked the sale of a video game on Tencent’s platform (gaming revenues account for about 41% of sales). Unfortunately, this is part of doing business in a country where the government can single-handily create regulations or block the sale of something. But I believe this is only a speed bump that will get worked out, after which gaming will go on as usual in China.

Overall, the company pulled in more than 73.6 billion Chinese yuan ($11.5 billion USD), a 30% increase over the same period a year ago, while profits soared 22%.

To be sure, these aren’t the same astronomical growth rates that investors are used to seeing, but nonetheless, it’s still great revenue growth. To put it into perspective, Cisco Systems (Nasdaq: CSCO), which reported earnings August 15, received applause from investors for growing revenue 5.9%.

My point is, Chinese stocks like Tencent will be fine. If you ignore the noise on the macro side for a moment and look at the company’s operations, you’re likely to see a different story.

Should You Buy The Dip?
For its part, Tencent has built an ecosystem with its gaming platform (WeGame) and messaging application (WeChat) that is nearly mandatory for every Chinese citizen to have. As I explained to my Top Stock Advisor subscribers back in July of last year, it’s hard to do business in China without WeChat.

And while you don’t really see any of Tencent’s products here in the United States, that’s what we like to call a moat, folks. This kind of indispensability makes it a good candidate for the kind of long-term holding we look for over at Top Stock Advisor, which is why we’re still up about 24% on the stock since last July.

Sure, shares of Tencent have had a tough year so far, but it’s been dragged down along with the rest of China’s market even though it doesn’t have the same exposure to the trade spat that many other companies have.

If you’re looking to buy the dip for an opportunistic play on China’s growth, Tencent is a good place to start.

P.S. In my latest report — 7 Legacy Assets To Own Forever — I uncover seven picks that dominate their markets, pay increasing dividends, and repurchase billions in stock. And most important of all, they reward investors with incredible returns over the long haul.

To learn more about these ideas, and get their names and ticker symbols, I invite you to visit this link.