Here’s Why The Government Debt Shouldn’t Freak You Out

Right at the onset of World War II, the British Ministry of Information produced a simple poster that would become an iconic piece of pop art. Originally intended to be a public morale booster, the poster was topped with the regal crown and in simple block letters on a red field were the words “Keep Calm and Carry On.”

I think of this poster when clients, politicians, and other pundits begin the customary gnashing of teeth and wringing of hands when the federal government talks of deficit and debt issue increases. Yes, $20 trillion is an almost incomprehensible number. The annual debt service, according to data from the General Accounting Office (GAO), was $457 billion in 2017.

#-ad_banner-#Now for the good news: Total U.S. government revenue clocks in at a little north of $3 trillion, according to the U.S. Treasury and other sources. The problem ISN’T the debt. The challenge is always SERVICING the debt. And, contrary to popular belief, the federal government is more than capable of doing so.

But what about deficit spending? The government is spending more than it brings in. True, then it must issue debt to make up the shortfall. True. Not a great thing.

This always leads to the “you couldn’t run a business like that” critique. Again, true. So, for the “government should be run like a business, so let’s elect a “businessman” crowd,  let’s take a shallow dive into the government’s balance sheet. A quick caveat: We’re not going to cover unfunded liabilities. Yes, those are scary. However, they’re always a moving target due to the aging nature of the population. Let’s focus on the here and now.

Costs
According to the Department of the Treasury’s annual report on the financial condition of the country, the gross operating cost for the government is $4.5 trillion (this does include assumptions for some future unfunded liabilities such as federal employee and veterans’ benefits). If Uncle Sam brings in around $3 trillion but needs $4.5 trillion, he borrows $1.5 trillion. Cue wringing of hands and gnashing of teeth. Uncle Sam is terrible at driving revenue to the bottom line.

Debt
According to the GAO, as of Sept. 30, 2017, the outstanding gross federal debt totaled $20.233 trillion. More wringing of hands, gnashing of teeth, and pulling of hair for dramatic effect.

Here’s where it gets good.

Assets
If we are going to look at the federal government like you would a business, any smart investor would look at BOTH sides of the balance sheet. So how does the left-hand side look? Pretty darn good.

According to a 2013 report by the Institute for Energy Research, the U.S. government owns mineral rights — both on and offshore — covering 2.515 billion (with a “B”) acres of land, which is greater than the total land surface of Canada, on and offshore oil and gas resources worth $128 trillion, and 45,190 underutilized (meaning “vacant”) buildings. And we have yet to scratch the surface of the value of all of the military hardware from jets to tanks and aircraft carriers.

So, just for fun, let’s measure the debt versus the oil and gas assets. That leaves the U.S. $107.76 trillion to the good.

And that, my fellow Americans, is why the world is comfortable buying our bonds. And no, the Chinese don’t OWN us. Here’s the actual breakdown of who actually owns the government debt. 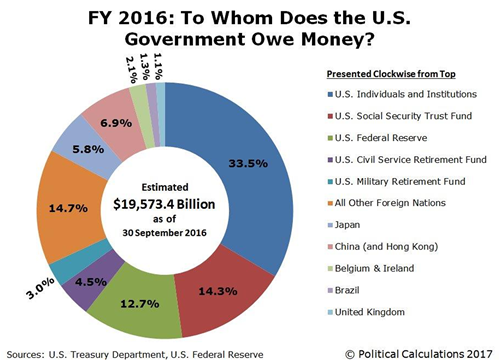 Yes. China does own over $1 trillion of our debt which, on a percentage basis, is less than 7%. If the United States was a company the Chinese would probably have a seat on the board — one seat. Who would control the board? The United States would, owning nearly 70% of the debt and nearly half of that by the federal government itself.

So, what does the future hold? Here’s the one catch: 59% of the government’s debt matures within the next four years. That’s a little scary. The most likely resolution will be to roll this debt out to the future. The average maturity of marketable government debt is currently only six years. This is too short, according to some experts, and I agree. Conventional wisdom says that the Treasury will gravitate toward 30-year bonds and may even experiment with longer maturities. Japan and Austria have recently issued 50 and 100-year bonds. Then again, so have Mexico and Argentina. Relying on 30-year maturities would be a good start, though.

Granted, $20 trillion is a Michael Bay movie-sized, scary number. But the nation is far from broke. It doesn’t mean that we don’t have some work to do. However, Uncle Sam’s balance sheet looks pretty healthy.

So, what do we do? Keep calm and carry on.