These Two Words Tell You How To Trade Q3 Earnings

The first three weeks of October were the worst for the S&P 500 since 2015, according to data from Bloomberg. The broad index was lower by more than 5% through Oct. 19 with Industrials and Materials plunging 7.6% and 9.6% this month. 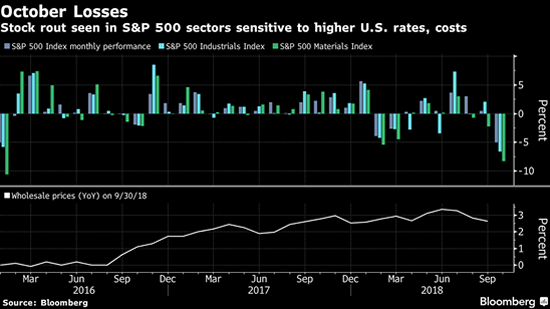 The rout comes as third quarter earnings promise to show another stellar quarter for corporations. Companies in the S&P 500 are expected to report earnings growth over 20% on a year-over-year basis.

The selloff has come on two words mentioned overwhelmingly in management guidance.

Those two words are being used to explain 3Q weakness but more importantly are being held as a warning of diminished sales growth and earnings to come.

It’s not “trade war” or “interest rates” that are scaring Wall Street. Those two words are “foreign exchange.”

#-ad_banner-#FactSet searched earnings call transcripts of the 24 S&P 500 companies reporting through Oct. 11 to find common themes. The research found that 15 of the companies (60%) mentioned the stronger dollar or foreign exchange issues as a negative impact on sales and profits, nearly twice as frequently as any other factor.

As third-quarter reports come out and the market looks to the next several quarters, investors may want to position in companies relatively immune from the developing dollar strength disaster or in companies that can benefit from it.

The Biggest Worry On Wall Street Isn’t Trade
Companies in the S&P 500 book nearly half their sales (43.6%) from overseas. This is a problem when the dollar strengthens because those sales and earnings made in foreign currencies are worth less when transferred to greenbacks. For companies that produce in the U.S. and export internationally, a surging dollar means their products become more expensive to foreign consumers.

Not only has the stronger dollar been the most frequently mentioned negative factor but it appears to be getting worse. Only 28% of companies reporting in the first few weeks of Q2 earnings had mentioned currency problems as a factor.

The Dollar Index gained 1.15% over the third quarter to 95.96 but is still well off its peak of 103.01 in December 2016. The Federal Reserve has signaled its willingness to continue hiking interest rates which could boost the dollar further against major currencies.

The Fed is expected to hike rates again in December and three times next year while both the European Central Bank and the Japanese Central Bank have yet to start restricting monetary policy. Top it off with a relatively strong U.S. economy and the dollar is expected to keep climbing.

AutoZone singled out the Mexican Peso, up 7.3% from the same quarter last year, as a headwind to sales. The currency effect swept across sectors with General Mills, Nike, Oracle, and Delta Airlines all reporting FX-related weakness.

3 Sectors And 3 Stocks For More Dollar Disaster
Within stock sectors, Technology and Materials are the two with the highest percentage of international sales at 58% and 51% of total sector sales while Telecom (international sales of just 3% total revenue), Utilities (3%) and Financials (24%) have the lowest currency exposure.

Signature Bank (Nasdaq: SBNY) is a commercial bank lending primarily to private business clients in New York and California. Net income for the third quarter rose 25% to $155 million from the same quarter last year on 3% deposit growth and a 5% increase in net interest income.

The bank has just recently expanded outside of New York in the first quarter of this year and has been successful in its new market of San Francisco. Its commercial banking model means the bank’s balance sheet is relatively low-risk and risk-based capital ratios are well above regulatory requirements.

Shares trade for just 1.5 times book value, well under the index average of 3.2 times book, according to Morningstar, and pay a 2% dividend yield.

Comcast Corporation (Nasdaq: CMCSA) is a $165 billion media giant and owner of NBCUniversal. Despite its global reach, the company books just 9% of revenue internationally.

This could change soon. Comcast outbid Fox in late September for a $39 billion acquisition of European Pay TV leader Sky. Sky is the leader in pay TV subscribers in the U.K., Italy and the third-largest in Germany.

While the acquisition is expected to increase international sales to 25% of total revenue, it will take several quarters for the deal to close. The ECB is expected to start raising rates mid- to late-2019 which could reverse course for the euro versus the greenback, just as European revenue at Comcast is increasing.

Shares currently trade for 15.8-times trailing earnings which are expected 13.6% higher over the next four quarters. Comcast pays a 2.1% dividend yield and has returned $5 billion, approximately 3% of the market capitalization, to investors annually through a share repurchase program.

Another place to look is foreign companies with business in the United States that might report an upside from dollar strength.

HSBC Holdings plc (NYSE: HSBC) is one of the most globally-diversified banks with $391 billion of its $2.5 trillion asset base in North America. The bank books over $3.4 billion in net interest income from the North American market and reported first-half earnings growth of 5% year-over-year, helped largely by a positive currency effect.

HSBC has an impressive position in Asia, which accounts for 49% of total revenue. It’s the largest bank in Hong Kong with 22% of deposit share and has operated in the administrative region for over 150 years.

The bank is at the tail-end of a multi-year restructuring program to exit underperforming businesses and cut costs. It has lowered expenses by $4 billion, approximately 10% of total expenses, with plans for $2 billion in additional savings.

Shares trade for just 0.88 times book value versus an average of 1.78 times book for large banks and pay a 4.8% dividend yield.

Risks To Consider: Currency effects are generally minor against other revenue and earnings drivers and could be overwhelmed against a negative rate environment for stocks.

Action To Take: Get ahead of a strengthening dollar to position in stocks with relatively less foreign currency exposure or those that could benefit from a rising greenback.