American Vs. Delta — Which Stock Is A ‘Buy’?

For equity investors looking to mitigate portfolio risk, a move to quality is the safe play. Equity investors should be looking to unload high-risk growth stocks in favor of stocks selling at a discount to their intrinsic value.

But finding value stocks after a decade-long bull run is no easy task. Many stocks trade at the high end of their normal price-to-earnings (P/E) ratio. Unfortunately, earnings are more likely than not to moderate going forward as higher rates slow the economy. Adding insult to injury, higher rates make it more difficult for companies to buy back their stock in an effort to manipulate their earnings per share (EPS).

#-ad_banner-#Now don’t get me wrong. I’m not saying the economy is going to hit a wall anytime soon. Forecasting the timing of the next recession is a fool’s errand, and I’m no fool. But given the likelihood that rates go higher, value stocks will produce higher total returns going forward. 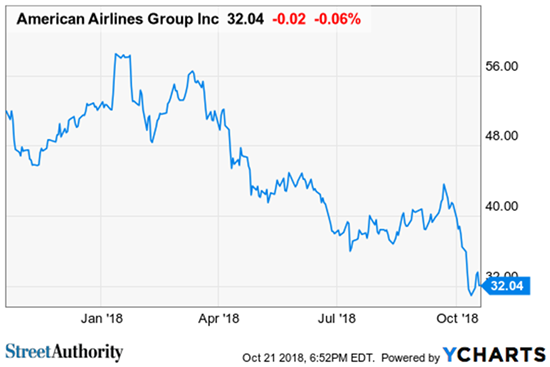 After all, the stock trades at a forward P/E of just 6.28. On a book value basis, AAL trades at a 22.5% discount to its historic average. The company’s enterprise value divided by earnings before interest, taxes, depreciation, and amortization (EV/EBITDA) sits at a very attractive 5.79. EV/EBITDA compares the value of a company, debt included, to the company’s cash earnings less noncash expenses. Value investors like to see a number below 7 — and the lower the better.

So is AAL a value stock or a value trap?  Personally, I think the latter. Here’s why…

American doesn’t hedge its fuel costs like many other airlines. As such, they expect fuel costs to rise more than $2 billion this year. So despite a 6% lower share count and the benefits of the Trump tax reduction, American Airlines expects a roughly 9% decline in its EPS. That doesn’t bode well for the stock.

Now, to offset rising fuel costs, American has been updating their fleet with fuel efficient airplanes — to the tune of about $25 billion. And while the company likely had no choice but to go ahead with the capital investment, the company’s debt load has ballooned to more than $47 billion. American Airlines now holds title to the most leveraged airline in the U.S., at a time when interest rates are on the rise.

The company is currently cash flow negative, again, at a time when its finances should be in better shape with a strong economy. While some see an improving cash position, the reality is quite different. That’s because many analysts overlook the company’s nearly $7 billion in unfunded pension liabilities. In a recent 10K filing, the company stated that due to favorable rules that expired in 2017, it would need to “increase materially” its pension contributions in 2019. That’s another hit to its cash flow it doesn’t need. AAL is looking more like a value trap than a value play.

A Better Airline Stock
On the other hand, Delta Airlines (NYSE: DAL) is in a much better position. 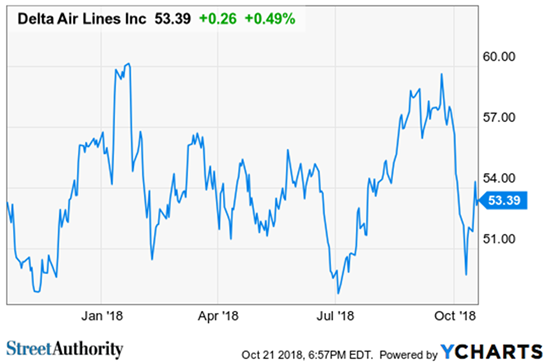 DAL trades at a forward P/E of 8. On a book value basis, the stock is selling at a whopping 81.7% discount to its 5-year average. And like American Airlines, Delta’s EV/EBITDA ratio sits at a stellar 6.03.

Like American Airlines, Delta no longer hedges its fuel. But the company has an advantage over other airlines by owning its own oil refinery. The refinery supplies about a quarter of the airline’s fuel needs – saving the company $0.07 cents per gallon.

For 2019, the company expects 8% passenger growth and operating cost savings on new aircraft placed in service. The company expects a 15% or better reduction in fuel savings with the more than 300 aircraft on order – to be delivered between now and 2025.

Delta has generated nearly $2.7 billion in free cash flow (FCF) over the past 12-months – and at the end of the day – generating free cash while the economy is strong will help the company when things aren’t as rosy.

At these levels, Delta appears to be roughly 25% undervalued. Now, that doesn’t meet Warren Buffet’s requirement to be at least two-thirds under-valued to be an absolute value stock, but DAL is flying in much cleaner air than American Airlines.

Risks To Consider: Airlines face two potential headwinds that could derail any investment thesis. The first is the price of fuel. Should any material disruptions to the supply of oil occur — all bets are off. Secondly, higher rates from the Fed and the bond market could potentially lead to a significant slowing in the economy. The airlines will not be able to raise prices to offset reduced passenger numbers like they can, to an extent, with rising fuel prices.

Action To Take:  Buy shares of DAL up to $55 per share. Mitigate risk by using no more than 3% of your portfolio to Delta Airlines. Use a hard stop at $35 to protect your principal. An investment in Delta Airlines by investors with a short-term horizon must stay cognizant of oil prices and the underlying economy as negative trends in both could materially affect a portfolio. Longer-term investors can accept greater volatility in the stock.