3 Value Stocks To Buy In A Volatile Market

After a spectacular, virtually volatility-free bull run, equity markets are a little jittery these days. The excuses, like in the classic film by the same title, are the usual suspects.

The Fed is raising rates too fast. The trade war. The jobs reports are too good, and the result will be wage inflation. George Soros.

The market has been knocked around a little. 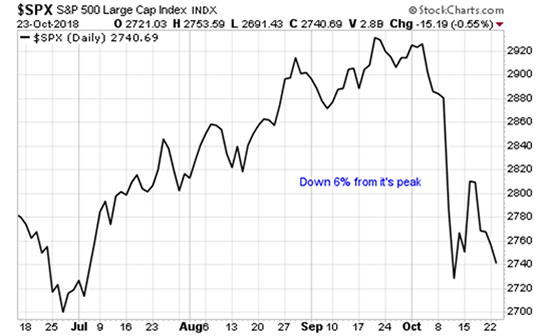 But what’s really bugging the market? We’ve heard the excuses, some of which probably have some credence or effect. What about bonds?

While maybe not an actual cause, the bond market may have been the canary in the coal mine. 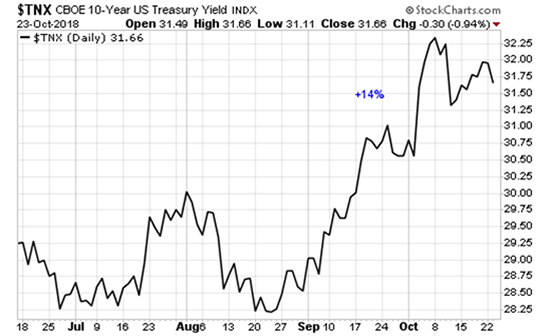 Bond prices began falling nearly two months before stocks. The yield on the benchmark 10-year treasury has risen 14% during the period.

Bonds were well overdue for a correction in order to “normalize” yields. But I don’t think stocks followed in lock step like it seems.

There’s no denying that the market needed to blow off some steam. But as legendary value investor Benjamin Graham said, “In the short run, the market is a voting machine…” Markets hate uncertainty, especially when it comes to politics and government, and the biggest political uncertainty is the midterm elections. While the fate of congressional control will be decided, there are also tight races at the gubernatorial and state legislative levels.

And yes, the market does care about state election results as well.

I’m not going to blame the midterm elections completely. But I do think the market is baking any outcome risk into its proverbial cake.

At the congressional level, anecdotal and historical evidence points to the Democratic Party gaining control of the House of Representatives by a slim margin and, most likely, the GOP remaining in control of the Senate. Not an entirely dire scenario. It’s a given that the House will be a thorn in the side of the executive branch for the next two years. However, very little gets done without the Senate, and with a blue House and a red Senate, not much will be accomplished.

#-ad_banner-#The result: government gridlock. It’s a good thing. The current administration has rolled back several restrictive regulations, and, combined with the corporate tax cut, that has noticeably goosed the domestic economy. If the above scenario plays out, the inability for either side to get anything done legislatively will be good for business and should give the seemingly tired bull market a second wind.

With that in mind, here are three stocks that will do well in that environment and are currently attractively priced.

AbbVie, Inc. (NYSE: ABBV) – The traditional, research-driven pharma business of the old Abbott Labs (NYSE: ABT), AbbVie is one of the most attractively priced big pharma stocks out there in a battered and scorned sector. The company’s research and development is focused on drugs treating chronic, autoimmune diseases and disorders. Their most recent and visible push is the anti-inflammatory biologic treatment Humira which is used to treat rheumatoid arthritis, psoriatic arthritis and subsequent psoriasis, as well as ulcerative colitis, Crohn’s and other inflammatory bowel diseases.

The company’s numbers are extremely compelling. Earnings per share (EPS) have grown at an average annual rate of nearly 24% over the last five years while annual revenue has climbed 9.04% for the same period. Even more mindboggling is a 487% return on equity (ROE).

Ford Motors (NYSE: F) – While the stock looks like it came in third or fourth in a demolition derby, the company still has plenty of gas in the tank. Announcing third quarter earnings that beat expectations along with an $11 billion restructuring plan, America’s premier auto maker has remained profitable by continuing its shift away from cars and toward higher-margin light trucks and SUVs.

But with the stock down over 30% year-to-date, is the hefty 8.1% dividend yield in danger? The company’s dividend payout ratio is a comfortable 43% and there’s a $25 billion pile of cash on the balance sheet. Ford Credit, the company’s financing arm, is amazingly profitable and the cash flow from that business alone could fund 70% of the common dividend.

Armed with those numbers and one of the best automotive technology research divisions in the business, Ford shares are dirt cheap at $8.93 and trade with a forward PE of 6.9.

International Business Machines (NYSE: IBM) – The people who basically invented commercial computing are still doing it and making boatloads of money. Having long since abandoned the hardware business, Big Blue has generated over $80 billion in annual revenue from cloud computing services, cognitive solutions, which includes its Watson artificial intelligence brand, as well as enterprise system consulting and financing.

While younger tech companies chase the next big app that, in Silicon Valley speak, “will make the world a better place,” IBM has been doing grown-up work by keeping data flowing at huge volumes. This has generated free cashflow of nearly $7.5 billion with a strong ROE of 29% and EBITDA margins of 45%.

The company is expected to grow EPS at an 8% annual clip over the next two years. This should allow the company to continue growing the dividend, which it has done at a 12% annual rate over the last five years. At $126.42, shares trade at a 26% discount to their 52-week high at a forward PE of just 9.16 and a dividend yield of 4.96%.

Risks To Consider: While the current correction could be short-lived, it could also turn into a bear market. Also, the political outcome of the midterms could be even more shocking and cause deeper pessimism than expected. High-quality value stocks with steady dividend streams are typically a sturdy defense.

Action To Take: As a basket, all three stocks trade at an average forward PE of 8.8 and a combined dividend yield of 5.92%. If this is indeed just a correction fueled by short term fear, longer term, patient investors should be able to enjoy total returns of 12% or better over the next 12 to 18 months.