Before You Buy Risky Biotech Stocks, Read This…

What a violent October we had in the market. And if that weren’t enough, we had the election to contend with to kick off November.

Now that it’s all behind us, I hope neither of those things distracted you from what matters at least as much (perhaps more) — which is taking the long view on your portfolio. For my Fast-Track Millionaire subscribers and myself, that means doing the hard work of watching developments in the market’s fastest growing sectors and digging deeper to find ideas that can dramatically alter the trajectory of our portfolio.

Take biotech for instance. This is an area that would have been easy to completely ignore during all the chaos and volatility of the past six weeks or so.

Risk vs. Reward
Biotechnology is risky, and so is investing in it.

#-ad_banner-#These risks can be managed, but they can also be compounded. An example of this is when investors flock to what they think is the Next Big Thing despite a lack of objective research-based evidence.

In that case, they might continue to pour money in an early-stage or developmental-stage company even as its stock goes down in hopes that the stock will bounce back soon. Just ask the hangers-on in cancer-targeting biotech Ziopharm (Nasdaq: ZIOP), which lost 88% of its value in 13 years as a public company. Or Adaptimmune Therapeutics (Nasdaq: ADAP), down 60% since its IPO in May 2015.

This is a sector where the highest rewards often mean the highest risks: a small biotech that solves a big problem can potentially double or triple in a matter of weeks. Of course, to make this possible and to mitigate risks taken, investors should do as much due diligence as they possibly can. Taking risks is OK — as long as you know why you’re doing it and understand what your limits are.

Most of us, generally speaking, should not be taking too much extra risk with our portfolio.

How, then, are we to invest in this notoriously risky sector?

One way is to not overdo it. If a company is going to cure cancer, its stock will skyrocket and reward investors — there is no need to keep doubling and tripling down on the position. “Go big or go home” might sound like a good strategy, but you have to set a limit on exactly how big your position can get.

A second way is to diversify.

A mix of commercial-stage biotechs, plus a few strong developmental-stage companies would give your portfolio a strong enough biotech exposure to benefit from the likelihood of a big breakthrough (in fact, our Fast-Track Millionaire portfolio has exposure to each).

Biotech IPOs
No wonder investors have been flocking to biotech IPOs this year. Many have skyrocketed, such as Kezar Life Sciences (Nasdaq: KZR), an autoimmune and oncology biotech, up 40% since its IPO in late June, and Autolus Therapeutics (Nasdaq: AUTL), a “cell-programming” company that targets cancer, up 90% since its IPO, also in June.

Both are extremely interesting. If you’re a Fast-Track Millionaire subscriber, don’t be surprised if one (or both) turn up as a “Buy” in a later issue. 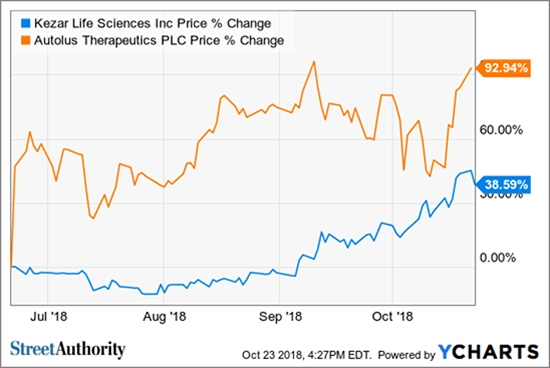 But first… let the homework begin.

At this time, I am also watching an interesting recent IPO, Twist Bioscience (Nasdaq: TWST).

The company is different from other biotech companies: it does not want to cure cancer, nor does it plan to target other diseases. This company manufactures synthetic genes and other DNA-based products. Twist pioneered a new method of manufacturing synthetic DNA by “writing” DNA on a silicon chip. This synthetic DNA, in turn, will be used by teams of scientists and doctors who try to cure cancer and other maladies. But, again, Twist’s specialty is not finding a cure, it’s making the DNA.

It’s a highly specialized mandate, with industry-leading technology (which, if it takes off, will offer a game-changing approach to clinical trials). TWST is a company to watch as it attempts to reinvent bioscience.

No, it didn’t flop on its October 31 market debut. The stock’s initial public offering was priced at $14 per share, and in the few trading days TWST has been public, has drifted higher, closing at $15.83 on Tuesday, November 6. Not a bad action, especially considering the lackluster overall market.

Apparently, its chief executive officer, Emily Leproust, formed the company while she was still an employee at Agilent (NYSE: A), which has now become a matter of public record because Agilent has notified the Securities and Exchange Committee (SEC). In a letter to the SEC, Agilent also says that the current CEO of Twist and other Twist employees took hundreds of confidential documents containing Agilent’s trade secrets and proprietary information.

There is no way to tell at this time whether TWST’s business and its intellectual property have relied on information that belongs to another company or even if this story is going to continue beyond an SEC complaint. But the lackluster post-IPO market action is telling us that the risks of investing in this unprofitable company, together with this potential lawsuit, are likely too high at this time.

The point is, that’s how it goes in this market. For every big winner that delivers triple-digits over a span of days (or 1,000%-plus over the years), there are dozens of ideas that simply don’t pan out.

Will TWST be one of them? It’s hard to say at this point.

Investors, in my view, will be better served by keeping TWST on their radar — and on their radar only. The company is interesting, but its underwhelming debut and heightened legal risk make its story much less appealing than other ongoing IPO stories.

Want to Know What the Future Looks Like?
Fortunately, my Fast-Track Millionaire subscribers have me doing all the hard work for them. My research team and I are constantly delving into IPO filings, research papers, and financial documents, all in the pursuit of that one big winner that could change the world — and your portfolio — forever.

So if you’d like to see what we’re working on right now, then you have to check this out…

I just released a report on the breakthroughs being made in something called “personalized medicine.” To put it simply, I think it’s going to spark a new wave of breakthroughs in the medical space — the kind that could dramatically lengthen the lifespan of individuals — and lead to incredible stock gains that we haven’t seen in a generation.

It could turn out to be the biggest winner of my career. It’s the most lucrative opportunity I’ve ever seen…

If you’d like to learn more, then I invite you to read my report right now.