What In The World Is Happening With Oil Prices?!?

We interrupt this regularly scheduled publication to bring you a breaking news bulletin.

Originally, I had planned to discuss the ramifications of last week’s mid-term elections with my Daily Paycheck subscribers. But there is plenty of time to get to that in the weeks ahead. For now, I’ll just say that gridlock in Congress is often advantageous for investors. And we’ll be seeing plenty of that over the next two years.

Instead, I want to steer your attention to some important news that’s been somewhat ignored amid the election news and the volatile overall market.

I’m talking about what’s happening with the price of oil.

The Bear Market Nobody Is Talking About
Benchmark crude oil prices dropped for 12 consecutive trading sessions, the longest such streak on record, according to Dow Jones.

You’d think that major shifts in sentiment for such a massive global market would take weeks or months to play out, not days. Supply/demand fundamentals can’t turn on a dime any more than a giant ocean liner can nimbly reverse course.

Or maybe they can.

The selloff has driven benchmark West Texas Intermediate (WTI) crude prices back near the $60 per barrel level. That’s a dramatic reversal from early October, when they climbed to a four-year high of $76. Just like that, oil has gone from a runaway bull market to a staggering bear market. 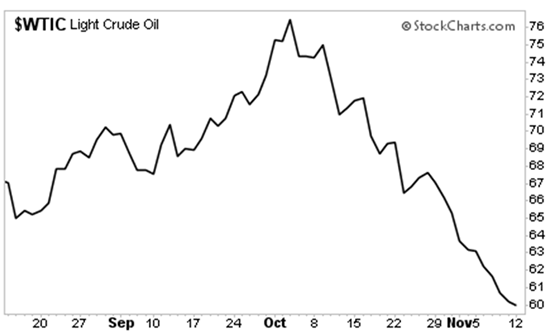 So, what’s behind this sudden retreat? Well, there are many factors. There’s the simple fact that global GDP forecasts have dimmed slightly, which could bite into oil consumption. #-ad_banner-#At the same time, production in several key nations has risen to record levels. That includes the United States, where output now stands at 11.6 million barrels per day.

There was some hope that tighter economic sanctions on Iran (the world’s fifth-biggest producer) would drain some of the excess global supply and tighten the market. But President Trump just granted temporary waivers allowing crude to keep flowing to eight trading partners, including China and India. In an already soft market, the decision not to restrict Iranian exports quashed the hopes of the bulls and sent prices into a tailspin.

What’s Next
But keep in mind, these kinds of imbalances have a way of self-correcting. Over the weekend, oil finally got some support on news that Saudi Arabia will start trimming shipments by half a million barrels per day to help avoid the unwanted build-up of surplus supplies. And Goldman Sachs just came out with a report predicting an oil shortage developing by 2020.

I’m not in the business of predicting short-term commodity price movements. Having spent five years writing a specialized natural resources investing newsletter, I can say such wagers are better left to futures market speculators (and even they get it wrong half the time).

However, this is an important trend to watch. Even though I don’t currently hold any upstream oil producers in my Daily Paycheck portfolio, bearish sentiment could turn up bargains in sectors that are adjacent, but less exposed — such as oilfield services and equipment and midstream pipeline partnerships.

If that happens, my subscribers and I will be ready to scoop up these bargains — and pocket the income from these elevated yields.

Of course, there are other groups that welcome falling energy prices, such as refineries. So, one way or the other, this upheaval could lead to investment opportunities. Near the top of my watch-list is a company that buys fuel by the metric ton — so it’s certainly not crying about the 20% pullback in crude prices. My subscribers will be hearing about it soon, possibly in next month’s issue.

P.S. Imagine… YOU, cashing a check every day for the rest of your life, thanks to a portfolio full of safe, reliable dividend payers. Sound crazy? It’s possible with The Daily Paycheck. To learn more, go here.