Why Kellogg Is A Sell

I’m not a technical trader, so using charts to identify longer-term stock trends is fraught with danger. However, that doesn’t mean stock charts aren’t useful — even for long-term fundamental investors.

Look at the chart of Kellogg (NASDAQ: K) below. The long-term stock trend has an obvious head & shoulders pattern. This pattern is a relatively strong bearish pattern that indicates a trend reversal has occurred — meaning the stock will likely decline going forward. 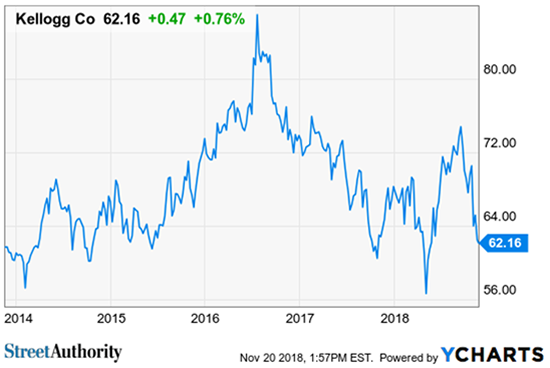 Of course, most fundamental investors don’t make investment decisions on charts. So let’s take a deep dive into Kellogg’s fundamentals in an effort to determine if the chart could foretell the future of Kellogg stock.

Changing Consumer Trends
Like many food companies, Kellogg is trying to stay relevant in an era of changing consumer food trends — away from sugary cereals and snacks to more healthy foods. In that light, the 112-year-old Battle Creek, Michigan-based food giant is putting its cookie and fruit snacks business on the chopping block, selling such brand names as Keebler, Mother’s, and Famous Amos.

#-ad_banner-#But a look at the company’s fundamentals paints a picture that indicates the company’s troubles run deeper than management thinks. Worse, the problems won’t be fixed by selling off assets, even if the company gets a premium for its brands. Of course, that seems a remote possibility given that the Campbell Soup Company (NASDAQ: CPB) is shopping its own cookie business at the same time.

Is A Dividend Cut In The Future?
Even a cursory review of dividend investors’ favorite stocks shows Kellogg to be at the top of the dividend game. And why not? After all, the stock boasts a $2.24 dividend, translating into an attractive yield of 3.63% at current prices. And with a payout ratio of 41%, there appears room for the dividend to grow.

But again, all is not as it appears. Analysts look at the health of a company’s financials by looking at its current ratio — a measurement of current assets divided by current liabilities. A number less than 1 indicates a company’s short-term assets are inadequate to cover their immediate expenses.

Kellogg’s balance sheet shows current assets of $3.036 billion, while the company’s current liabilities are $4.479 billion. That’s a current ratio of 0.67 – an abysmal result. A similar ratio, the acid test, looks at current assets over current liabilities, but subtracts a company’s inventory from its assets. In this measure, Kellogg’s acid test ratio is an appalling 0.406.

In and of itself, these ratios are bad enough. But the company’s dividend is costing $777 million, based on its 347 million shares outstanding. So between the dividend and current liabilities, the company has current expenses in the next 12-months of approximately $5.3 billion. On the other hand, the company has free cash flow of just $1.8 billion plus its current assets of another $3 billion to pay its bills. That’s a shortfall of $414 million. In short, something has to give — and the logical thing for management to do is to cut the dividend.

And when that happens, the bottom will fall out of Kellogg stock.

Miniscule Stock Buybacks
Another indication the company is faltering under current management is the lack of share buybacks approved by the company in 2017. The plan authorized the repurchase of up to $1.5 billion beginning in January 2018. Inexplicably, the company purchased just $120 million worth of shares — the lowest level in five years. Keep in mind, this was at a time when the stock was trading at multiyear lows. It just doesn’t make sense — or does it?

Clearly, management understands it doesn’t have the capital to fully implement its share repurchase plan. What makes this so disconcerting is that management hasn’t come clean with investors about the seriousness of the company’s finances.

Takeaway
Kellogg is an iconic brand in America. But mediocre management with plenty of excuses for their many failures has stretched the company to its breaking point. The company will survive, but for the next several years, the company’s decline will accelerate.

Buy the Fruit Loops, but avoid the stock. Kellogg is a sell.

Risks To Consider: Kellogg could garner a premium price for the sale of its cookies business, but that seems unlikely. Even so, should the company achieve a better than expected sale price, the stock could reverse the downward trend – but only for a short while. The sale of the company’s assets is a flotation device – not a lifeline. In the end, it would only delay the inevitable.

Action To Take: Sell the stock into strength.