Is Target A Value Or A Trap?

Successful investing requires discipline, focus, and a healthy skepticism of quarterly and annual reports. But it’s this last idea that counts the most. For if investors fail in their duty to look beneath the surface of corporate reports, they have nobody to blame but themselves for making poor investment decisions.

Take Target (NYSE: TGT), for example. Many investors looking for an entry point for the stock may have found it after the stock declined behind the company’s quarterly earnings announcement last month. As you can see from the chart, the stock took a nosedive on the report — wiping out an entire year’s gains. 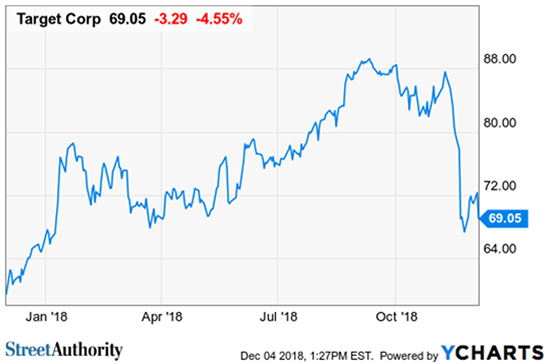 Now, it’s true the stock has since regained about 2% since the decline, but clearly, investors didn’t like what management had to report.

The Catalyst
Ostensibly, the catalyst for Target’s stock decline was lighter than expected growth for its third quarter. Analysts’ expectations were for the company to report same stores sales growth of 5.5%. Instead, the Minneapolis retailer came in a little short at 5.1%. Adjusted earnings also fell short of expectations, coming in at $1.09 — three cents short of Wall Street’s expectation of $1.12.

#-ad_banner-#But that’s not to say all the news was bad. Target reported that total sales grew by 5.7%, to $17.6 billion, and store traffic increased by 5.3%. More importantly, the company’s digital sales channel increased by an impressive 49%. This result added nearly two full percentage points to Target’s same store sales numbers.

Still, investors seemed disappointed in Target’s performance, and the stock price has demonstrated that fact.

A Deeper Look
While Target’s third quarter results didn’t meet expectations, the way the stock nosedived on the news seems a bit overblown. After all, the company’s earnings per share (EPS) grew by 33.6% on a GAAP basis, and 20.2% on an adjusted basis. That’s hardly the kind of result that would justify driving the stock down so thoroughly.

Or maybe it is. A closer look at the company’s results indicates troubles bubbling just beneath the surface. Troubles that remains more problematic than the 0.2% decline in average store spending per customer visit.

First, the company’s operating income decreased by 3.3% for the quarter, which equals the results for the first nine months of Target’s fiscal year. Clearly, growing same store sales is costing the retailer greater amounts of money.

This is reflected in the company’s compression of its gross margin. Third quarter results indicate the company’s margin decreased 90 basis points to 28.7%. The decrease was attributed to increased digital fulfillment costs as well as increased supply chain expenses driven by holiday inventory.

But the problem with this result is that the company’s margins are not likely to see any relief in the near term. A secular trend to digital merchandising isn’t going away, and for Target to materially compete with both Amazon (NASDAQ: AMZN) and Walmart (NYSE: WMT), the company will feel the pressure on its margins for years. Worse, its margin compression could accelerate given the company’s commitment to a $15 minimum wage by the end of 2020.

An Even Deeper Look
Target has been buying back its stock at a healthy clip. The company bought back 6.3 million shares in the third quarter for a cost of $526 million, or an average price of $84. Year-to-date, the company has repurchased $1.45 billion of stock at an average price of $76.38. The result of these stock buybacks is artificially boosting the company’s earnings per share.

But that’s not all…

The company spent $463 million in October 2017 repurchasing more than $344 million in debt obligations. This helped the company realize about $169 million in net interest savings through the first nine months of 2018.

Lastly, Target’s tax rate decreased from 22.2% to 13.6%. This difference alone accounted for fully 55% of the company’s earnings per share growth. But it gets worse. When adding up the benefits of the stock buybacks, lower interest costs, and lower tax rate, 100% of the company’s earnings year-to-date comes from these non-operating factors – and this doesn’t bode well for the stock.

Takeaway
Investors looking at the recent decline as an opportunity to take a position in the stock should think carefully before pulling the trigger. The stock is effectively range bound for the next several years.

Of course, the company is a dividend aristocrat — meaning the company has raised its dividend for at least 25 years. Target pays $2.56 annually, for an attractive 3.8% yield based on current prices. And for current shareholders, the dividend, by itself, may be enough to justify holding onto the stock in the interim.

But there’s no margin for error in taking a new position in the stock at today’s prices. The company’s core earnings simply don’t justify the risk.

Risks To Consider: Pressure from higher cost digital sales as well as stiff competition from Amazon and Walmart will likely continue compressing the company’s margins. However, the company remains upbeat and expects to report profitable core growth in fiscal 2019. Should this occur, the stock will rise significantly. That, however, seems a remote possibility – especially in light of economic storm clouds gathering on the horizon.

Action To Take: If you own Target shares, hold the stock and enjoy the benefit of the nearly 4% dividend. You may want to buy puts to protect your position from any significant declines. On the other hand, investors with no current position in the stock should avoid the hype and sit on the sidelines.