If 2018’s stock market behavior was an amusement park ride, potential riders would probably be required to read a 60-page warning booklet and sign a release. 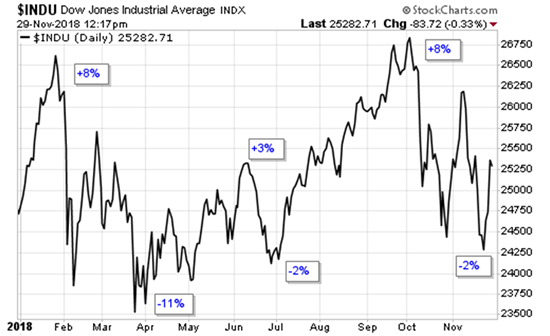 “All Over The Road” would probably be a good name for it. Unfortunately, investors can’t exit through the gift shop.

It’s been a brutal year.

And anyone who says they aren’t sitting on losses is either a liar or a genius.

#-ad_banner-#But what if you still believe in your idea longer term? The way markets can move you may sell and book a loss, only to wait 31 days and buy back the stock at a higher price. It’s what psychologists refer to as “fear of missing out” or “FOMO.”

From a tax-loss standpoint, investors may sell a stock to realize a loss to offset the tax consequence of a gain. However, the stock sold cannot be re-purchased until 31 days after the sale to avoid the wash-sale rule.

So how can you book a loss but stay in the name? One of the best ways is to buy the company’s bonds.

It’s totally kosher. Every publicly traded security, whether it’s a stock, bond, or fund, has what’s known as a CUSIP number. CUSIP stands for Committee on Uniform Security Identification Procedures. Think of it like a serial number.

Often, especially in the corporate bond space, the bond prices of a company’s debt can rise and fall in sympathy with the price of the stock. This is especially common if the bonds are below investment grade or junk bonds.

For example, you have an unrealized loss of 30% in common shares of XYZ. You’ve also made some shrewd trades earlier in the year and booked some taxable gains. You still believe in the fundamental story behind owning XYZ (earnings, products, etc.) but would like to book the loss to minimize your tax consequence.

XYZ’s bonds that mature in 2022 are trading at a 20% discount to their face value ($1000) and are yielding 5.5% to maturity. You sell the common and buy the bonds, harvesting your loss and staying invested. Your income stream may have improved as well.

General Electric (NYSE: GE) — Once a bellwether of American industrial might, corporate bloat, the 2008 financial crisis, and the trudge digging out of that has taken a toll on the stock. After disastrous earnings reports and restructuring announcements, which included a desperate-looking dividend slash, the stock has been pummeled down to near decade lows. 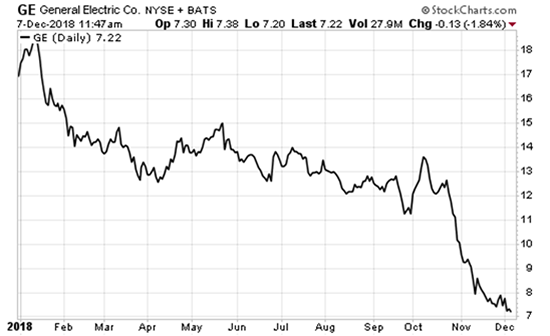 Losing an income stream and being handed a 60%+ loss year to date adds insult to injury. However, GE’s been around a while and will more than likely survive. Still the leader in high tech, medical imaging equipment and other high margin, capital equipment manufacturing, investors can pick up the company’s adjustable rate, hybrid preferred stock (part of the company’s debt structure and senior to the common stock). The current 5.00% coupon is locked in until 2021 after which it will float with 3-month LIBOR plus 3.33%. The investment grade (Baa3/BBB-) preferred currently trades at a 20% discount to its face value of $1,000, bumping the yield to call up to 6.25%. Not a bad looking swap at all.

Netflix (NASDAQ: NFLX) — The companion to the words “…and chill”, Netflix has hulked up to become the current leader in the streaming video space with 118 million global subscribers. This distribution power has given rise to the company producing its own award-winning, wildly popular content that will help with subscriber growth going forward. The stock has turned in a beefy return so far this year. 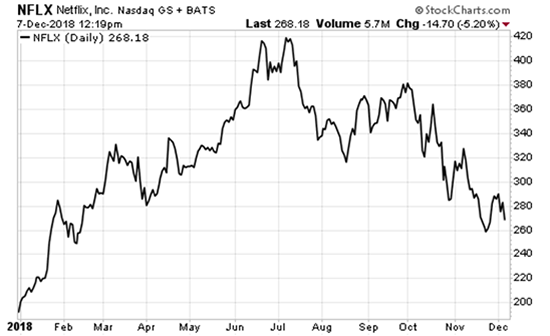 But, what if you, like many, got to the party late and are binge watching a 20% or better embedded loss?

While Netflix shares got out over their skis with ridiculous metrics such as a forward P/E ratio of 100.23 (that’s after a pullback) and a price to cashflow of 652, there is a truly viable business behind the hype. Rather than endure the drubbing the stock is currently taking, investors could take advantage of a tax loss sale and switch into the bonds. Investors can pick up Netflix paper due in 2026 with a 4.375% coupon at an 8.5% discount to their par value ($1000) and collect a yield of 5.19%, a huge pick up in income over the common stock which pays absolutely nada.

Risks To Consider: The Netflix bonds, while at the upper end of junk ratings (Ba3/B+) are still below investment grade. The GE preferred is at the lower end of the investment grade spectrum and if the company’s financial picture deteriorates, a credit downgrade is not out of the question. However, the risk tradeoff between receiving no income from either stock and getting paid 200 basis points or more over a 10-year treasury is almost a no-brainer.

Action To Take: Investors in need of a tax loss can still maintain exposure to both Netflix and GE and receive income and potential upside while they wait. Income of better than 5% and possible upsides of greater than 15% should take some of the sting out of taking the initial loss.