Sick Of The Market Turbulence? Read This…

As the turbulence jostled the plane, you could hear the laughter of children in the back enjoying the ride as if they were on a roller coaster. Meanwhile, the rest of us clung to our armrests, heads pressed firmly back, eyes forward and tense.

Holding our breath waiting for it to end.

This wasn’t the occasional jolt of turbulence that you often feel on a flight. This was a prolonged rattling that made you second-guess airplanes as a legitimate mode of transportation. It was the worst bout of turbulence I’d felt since flying into the southernmost city in the world, Ushuaia, Argentina, which is known for its horrendous winds, nearly a decade ago.

Going long periods of time without feeling that vicious, prolonged turbulence makes you forget what it’s like. You forget about the risks associated with flying.

#-ad_banner-#But once you hit that violent air pocket your mind begins racing, worst-case scenarios run through your head like a slide show. Are the air masks about to drop? Are these wings going to be ripped off? Is this plane going to crash?

The pilot came on over the intercom to tell us he ordered the flight attendants to remain seated for the duration of the flight and that no drinks will be served. So much for helping to calm the nerves. He then calmly informed us that we were going through some crosswinds and that there was nothing to worry about.

Even though I knew it was highly unlikely we would crash, having the pilot reassure us that all was good and we would be descending shortly was comforting. It put my mind at ease and I was able to release my death grip on the armrest.

Looking back, the flight experience resembled what I believe investors are feeling today.

It’s been so long since we’ve had to deal with real turbulence in the market, and investors are on the edge of their seats. Recall that we experienced nearly zero market volatility during all of 2017. In fact, until now, we’ve gone through only one other bout of volatility (at the beginning of the year) since President Trump was elected in November 2016. That’s 25 months ago.

So, it’s understandable that investors are on edge. Anytime there’s something out of your control and the future is uncertain (especially when it comes to money and jobs), people tend to get extra anxious.

Unlike my pilot, I won’t ask that you refrain from drinking, but I would like to provide some reassuring words…

The economy is chugging along just fine. Unemployment is low, and occasional corrections are healthy for the stock market.

First, let’s touch on the economy. I want to show you a simple indicator that has an incredible track record of predicting recessions. I’m talking about the Leading Economic Index (LEI) from an independent research group called The Conference Board.

The Conference Board’s LEI takes into account a variety of economic indicators — everything from employment to housing to interest rates.

Now take a look at the chart below. As you can see, every recession of the past 50 years happened after the LEI went negative… 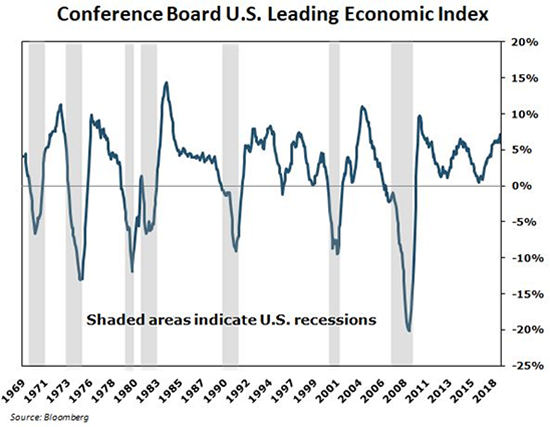 This index is showing that the economy is healthy. We’re nowhere near zero today, let alone negative, which has historically happened before a recession.
The biggest takeaway is that right now — according to this indicator that boasts an impressive record — a recession does not appear imminent.

What To Do Now
If you are still worried about the daily fluctuations in your portfolio, then it’s a clear sign that you are carrying more risk than you’re comfortable with. If that’s the case, think about cutting some losers or taking profits from some of your winners.

That’s what I’m doing for my portfolio at Top Stock Advisor… I just recently cut two positions from the portfolio and added a position in what many investors dub “financial disaster insurance.” You should consider doing the same.

Aside from that, I’m also playing offense. I just recently released my list of top picks for 2019 to my subscribers. This annual report is easily one of the most popular things we do at Top Stock Advisor — and I think these picks are going to come in especially handy in this uncertain environment.

While nothing is certain, we’re convinced — based on our cumulative decades of experience and expertise — that these stocks are your best bet for building wealth in 2019 and beyond. To learn how to get your hands on this report, go here.