The Most Powerful Investing Force In The World

Einstein called it “the most powerful force in the universe.” But you don’t need to be Einstein to understand why it’s has also been called an investor’s best friend — or to see how you can profit from it.

The modern world’s most celebrated intellect was referring to the concept of compounding — the practice of earning money on what you have already earned.

Fortunately, you don’t need to be an Einstein to understand why compounding has also been called an investor’s best friend — or to see how you can profit from it.

Stop me if you’ve heard this one: In ancient Greece there was a merchant — let’s call him Demetrios — who had a reputation as a savvy money-handler. An acquaintance brought over a wagon-load of drachmas (coins variously estimated to be worth about $0.19 apiece) and asked Demetrios to put the money in a trust and invest it for 2,000 years.

Demetrios kept all of his acquaintance’s money as commission, save for a single 19-cent drachma, which he invested in an Athenian bond paying 3% annually. After 2,000 years of reinvesting the returns from the 3% payout, according to the math, that drachma would have grown in value to be worth more than all the assets on earth.

Happily, you don’t need to wait centuries for compounding to pay off — you can begin to see the difference in a matter of months.

That’s the central tenet to our premium income service, The Daily Paycheck.

The Daily Paycheck provides investment ideas that offer above-average dividend yields and frequent, dependable distributions each month. The goal is to build a portfolio that over time will deliver a steady stream of dividend payments, or “paychecks,” on top of better-than-average capital gains.

So what’s the secret weapon? Nothing less than “the most powerful force in the universe” — on steroids.

In The Daily Paycheck, our research staff won’t even look at a stock or a fund unless it pays a healthy dividend.

Then, each time a dividend payment is made, it’s used to buy additional shares — thereby compounding the original investment.

Now, a typical income portfolio will hold a few dividend payers, and maybe a fund or two. And, yes, you’ll receive dividend checks every three months, or so — a “quarterly paycheck,” if you will, that when reinvested will likely deliver outsized returns over time.

However, The Daily Paycheck is anything but typical. For one thing, the advisory currently tracks 47 holdings spread out among three distinct portfolios. Moreover, 16 of those holdings pay dividends on a monthly basis.

The increased frequency of payments means two things: 1) Your income is spread out over 12 months of the year instead of four and, 2) thanks again to the power of compounding, the income potential is magnified.

We’ve seen how compounding could have worked for the Ancient Greeks. How can it work for the rest of us?

Daily Paycheck Staff: If you invest $10,000 in a security with a 7% yield, you will make $700 a year in income. If you take those dividends and reinvest them, your holdings will generate $982 a year after five years. After 20 years, your investment will generate $2,709 in dividends — 287% more than if you hadn’t reinvested your dividends. And here’s the great thing: Even if the security never gains a penny, after 20 years, your $10,000 investment will grow to $39,697. 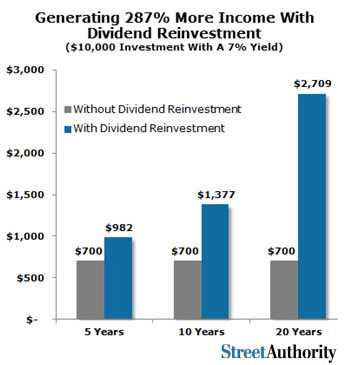 In the past you’ve cited both conservative investments, and aggressive ones. Who makes up your Daily Paycheck audience?

Daily Paycheck Staff: The beauty of The Daily Paycheck strategy is the range of investors it works for. Obviously, we have a lot of Baby Boomers who are starting to transition their growth portfolios to portfolios that can generate income for their pending retirements. By starting now, they can build a portfolio that generates more and more income in a relatively short amount of time.

We have a number of retirees that are more interested in current income. They tend to do less dividend reinvestment. But with a portfolio full of securities that have an average yield above 5% (including a few yielding 7%, 9%, and even 10%), they find a lot of ideas to suit their needs.

And we’re a little surprised — and jealous — at the number of younger people who subscribe to The Daily Paycheck. Imagine if you’d started with this strategy when you were their age. With decades of compounding ahead of them, they are capable of amazing growth — without suffering though the volatility associated with aggressive equity portfolios.

You mentioned volatility or, more specifically, a relative lack thereof. I take it you consider that to be another key advantage of your strategy?

Daily Paycheck Staff: Absolutely. Obviously, every investment is risky. But income-generating securities tend to be less volatile than the overall market. As a result, our portfolio is roughly 33% less volatile than the S&P 500 Index. And since we specifically select investments that I believe are best suited for dividend reinvesting over the long term — strong, stable income providers — our subscribers worry less about getting in and out of positions when market conditions change. It really is a low-maintenance strategy.

When the market is turbulent, it’s easy to feel bad for investors with aggressive equity portfolios. They lose sleep the night after the market plummets. On the other hand, our subscribers actually look forward to checking up on their portfolio on bad market days. They love to see that we’re reinvesting dividends at incrementally lower prices and locking in incrementally higher yields.

Editor’s Note:  Around the office, we call The Daily Paycheck strategy “The Best-Kept Secret For Getting Rich.” After getting to a little more about how the strategy works, it’s easy to see why.

It won’t happen overnight, but it can happen faster than you think. With a simple, no-nonsense approach to investing, Nathan Slaughter and his team have been able to guide thousands of Daily Paycheck subscribers to “paychecks” of hundreds (or thousands) of dollars each and every month.