Warning: Don’t Be Fooled By The Market Rally

What are they saying? Well, most of them are excitedly pointing to the big gains we saw the past Friday and on the day after Christmas when the Dow Jones Industrial Average gained 1,086 points — the largest one-day gain in history.

Rather than arguing, I’d simply like to take this time to mention that eight of the 10 biggest days in the Dow have happened during bear markets.

I’d like to dive into what this really means for the market in just a second. But first, let’s take a look at the data… 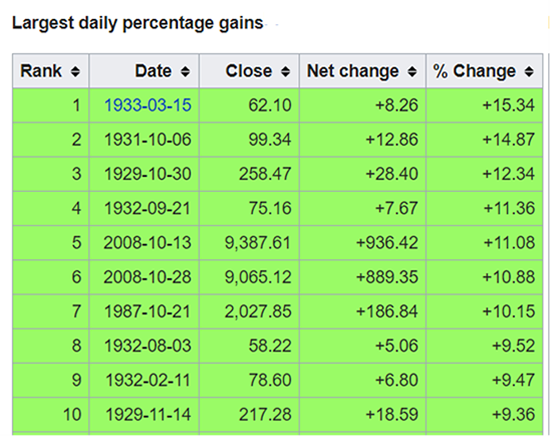 Not To Burst Anyone’s Bubble, But…
Let’s go back to the green table above showing the big “up” days in the Dow. The only two big days that happened during bull markets occurred in August 1932 and September 1932. Those gains are marked by blue arrows in the chart below.

Stocks bottomed on July 8, 1932, less than a week after Franklin Delano Roosevelt was nominated for President. There was no doubt FDR would win in November after he pledged to provide a New Deal for America.

#-ad_banner-#The old deal simply wasn’t working well. Accurate economic data wasn’t available at that time, but economists believe unemployment was above 20% in 1932 and the Great Depression was in full swing with the economic production at least 25% below its peak.

Investors didn’t know what to expect. But they believed FDR would deliver. Their enthusiasm affected the stock market, and that July day really was the bottom of the bear market that began in 1929.

However, the other eight days in the table above all occurred during bear markets. This means the big up days of the past two weeks are more likely to be bear market rallies than bottoms. This is consistent with the volume seen recently.

The next chart shows we still haven’t seen the kind of selling associated with capitulation, which is when investors sell their positions during periods of stock declines. (Capitulation is important because it’s often associated with market bottoms; the thought is that once everyone who’s going to sell has sold, there’s no direction for stocks to go but up.)

At the bottom of the chart are bars showing the day’s volume for the New York Stock Exchange. The solid line is the 21-day moving average (MA) of volume (which approximates about one-month of trading, as there is an average of 252 trading days in a year, and 252 divided by 12 is 21).

In the bottom panel, I placed a heavy grey horizontal bar at the 90% level. When one of the blue volume bars hits this line, it means we saw a strong “up” day where more than 90% of trading was to the upside. And that’s exactly what we saw from those two recent rallies, which actually topped that bar.

But the big “up” days are usually preceded by large “down” days where at least 90% of the volume is to the downside. We have only seen one day like that so far in the selloff, in early December.

Without capitulation, it’s unlikely the bear market is over. These past two weeks have the feel of a bull trap — a false signal that traps bulls into losses. That opinion is supported by the news from Apple…

Apple Calls Out Problems In China
…and we should really be listening to what the tech giant has to say.

According to The Wall Street Journal…

Apple slashed its quarterly revenue forecast for the first time in more than 15 years, an unprecedented move in the Tim Cook era that was prompted by a downturn in sales of iPhones in China.

The surprise cut, issued Wednesday in a letter from the chief executive to investors, renews concerns about waning demand for Apple’s marquee product, the iPhone, which makes up the vast share of its revenue and has vaulted the company’s value and profits. It also raises fresh questions about Apple’s prospects in China, the world’s largest smartphone market, which represents nearly 20% of Apple’s sales.

To me, there are two important points in that story.

One is that Apple missed its forecast. Unlike many companies, Apple is very good at forecasting and hasn’t missed a quarterly forecast in years. If Apple was this far off the mark, I’d wager that other companies are as well and will have to slash forecasts in the coming weeks.

Second is the fact that Apple blamed China for the miss. Chinese authorities are acting aggressively to stimulate economic growth. Last week, they reduced reserve requirements for banks. That didn’t get much attention, but it’s a big story.

Reserve requirements are a margin of safety for banks. In the United States, for example, they are required to hold a certain percentage of their assets in cash in the vault and on deposit at the Federal Reserve. The rest can be used for loans.

For example, say a bank has $200 million in deposits. They might be required to place 10% on reserves. This would allow the bank to issue $180 million in loans, potentially creating jobs and boosting economic activity. Reducing the reserve requirement to 9% would free up an additional $2 million.

Reducing reserve requirements can be a quick way for central banks to stimulate the economy. If banks do take advantage of the lower requirements, there could be an immediate economic stimulus. And it doesn’t cost the government anything. It’s free money if it works.

What makes this so important is the fact that this is the fifth time in a year that China’s central bank lowered reserve requirements. This latest cut frees up an estimated $116 billion for lending.

On the downside, more loans mean more risks since there will be some defaults over time. Rising defaults were one problem banks faced in the 2008 financial crisis, and defaults are already rising in China to the highest levels seen since 2009.

Despite the risks, the People’s Bank of China appears to be doing all it can to stimulate the economy. That means they see problems… the kind of problems that Apple noticed.

The Takeaway
This is the kind of information I like to look at as an investor. To me, it’s important to consider that China’s central bank is acting aggressively at the same time Apple’s management is telling us the Chinese economy isn’t acting the way the company expected.

This points to a problem, and it’s yet another reason why I believe there is a global economic slowdown ahead.

I should also note… over the past few weeks, my outlook has been focused on the stock market because so much has been happening. I do intend to look beyond stocks at times, and plan on updating my outlook for gold in the coming days.

The reason I bring this up is because even though we’re likely looking at a falling stock market doesn’t mean our portfolios need to suffer the same fate. A down market will still present a number of short-term trading opportunities. In fact, my Profit Amplifier subscribers and I have already made a handful of 100%-plus gains in the past five weeks.

No matter what happens on Wall Street — or in Washington — I expect 2019 to be a profitable year for us. That’s why if you haven’t taken the time to learn more about our strategy and how it works, I strongly urge you to do so now. You can follow this link to learn more now.