Why ExxonMobil Is A Buy-And-Hold Stock

Recent market volatility has forced investors to seek safer investments for their portfolios. For many, stocks with a solid dividend-paying history with a low beta (β) offer a safer alternative to other stocks.

Given the wild ride investors have experienced since October, finding solid dividend stocks with low betas is imperative. Should the market volatility continue unabated, huge drawdowns are possible with high beta stocks.

Fortunately, finding such stocks isn’t too difficult. One such stock is ExxonMobil (NASDAQ: XOM). As you can see from the chart below, the stock suffered in 2018 — losing 18.6%. 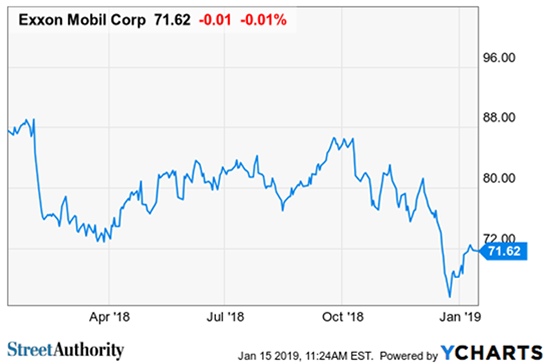 While the stock is off its recent lows, the current price still presents an attractive entry point for long-term investors. The reason why is simple: buying Big Oil when the price of oil is relatively cheap is just plain smart.

#-ad_banner-#After all, cheap oil won’t last forever — given that most producers suffer damage to their business models when the price of oil goes under $55 per barrel. At these levels, producers have no choice to cut production in an effort to force prices higher.

But that’s not something that happens overnight — as most energy traders understand. It can take month for producers to cut production, including taking rigs offline, to offset lower prices. And it’s during this time that long-term exposure to oil stocks make the most sense.

Solid Performance In A Soft Market
Despite the soft oil market, XOM posted higher numbers on both the top and bottom lines in the company’s third quarter. The company reported quarterly revenues of $76.6 billion and earnings of $6.2 billion, or $1.46 per share. The quarterly earnings beat expectations by a whopping 19%.

And these results showed up where it counts. The company reported free cash flow of $7.2 billion, of which it returned $3.5 billion to shareholders in the form of dividends. That leaves the company with more than $3.7 billion of surplus cash for the quarter.

Of course, an examination of a company’s quarterly results when looking at a company’s long-term prospects isn’t a basis for making an investment decision. But if the company can perform this well when oil prices are low, imagine the outcome when oil prices rise – as they inevitably will.

Long-Term Trends
By 2040, the global population will reach roughly 9.2 billion people. During that time, global gross domestic product (GDP) will more than double. Most of this growth will occur in emerging markets, which will see their collective GDP to rise by 165%. The developed world will lag with an increase of just 60% over the same period.

Of course, adding nearly another 2 billion people to the global population will automatically increase the demand for energy — by more than 25%. And while some of that demand will be in the form of renewables, the vast majority of the demand will occur in developing economies where the demand  for cheap energy in the form of oil and natural gas will remain high.

But investors don’t have to wait until 2040 for XOM to reap the rewards of the growing need for energy production. The company expects to see its earnings grow by 105% by 2025 even if the price of oil remains at current levels. But that seems pretty pessimistic.

ExxonMobil’s earnings will increase by almost 150% if oil averages $60 per barrel over the next six years — a more likely prospect. That number jumps to 224% if the price of oil goes to roughly $80 per barrel.

Dividend Aristocrat
The best part of this investment thesis is that ExxonMobil will handsomely reward investors while awaiting the inevitable rise in oil prices. XOM has grown its dividend at an average annual rate of 6.2% for 36 years.

But a better measure of a company’s ability to sustain its dividend is free cash flow. Free cash flow is the cash left over after a company pays its operating expenses and capital expenditures.

For the first three quarters of 2018, XOM generated $13.9 billion of free cash flow against dividend payments of $10.3 billion, or a payout ratio of about 74%. In other words, the company’s dividend is well covered at a time when oil prices are at lows. The dividend only becomes stronger as oil prices rise.

Not A Screaming Value
Now, XOM isn’t a screaming value play at current levels. ExxonMobil trades at a trailing price to earnings (P/E) ratio of 13.2. But keep in mind, that’s a 38% discount to the company’s five-year average ratio of  21.4.

But based on its historic dividend yield, the stock would have to be priced at $126.71 to match its normal dividend yield of 2.59%. And that’s a well within the realm of possible over a five to seven year time horizon. And with a beta of 0.88, ExxonMobil will reward investors with less volatility than the market as a whole.

Risks To Consider: Despite the relatively low beta of XOM stock, oil prices can, and will, experience volatility in the coming years. And because upstream and downstream companies, like ExxonMobil, are inextricably linked to oil prices, the stock will do better when oil prices go higher. For that reason, the investment thesis underlying this recommendation is for the long-term.

Action To Take: Buy shares of XOM up to $73 per share. Mitigate risk by using no more than 3% of your portfolio to ExxonMobil. Use a hard stop at $50 to protect your principal.