2 Indicators Signal ‘All Clear’ In The Market

Since December 24, when the S&P 500 registered its lowest mark of 2018 (and a near 20% pullback from its September highs) we’ve seen a robust rebound. The index has rallied more than 12% since then.

I don’t know whether we’re out of the woods just yet… but between a couple of bullish indicators that I’ll discuss below, and my Maximum Profit system signaling four new buys last week, I’d say that the outlook at the moment is positive.

Indicator #1
The first bullish indicator is one that I touched on previously, and that’s the Advance-Decline Line (AD Line). This is a breadth indicator that shows us how many stocks in the underlying index — the NYSE Composite Index in this case — are advancing and how many are declining. The purpose of looking at a breadth indicator is to gauge market sentiment, whether it’s leaning more bullish or bearish, and how strong the trend is.

When I wrote about this in November, the AD Line didn’t confirm the stock market’s new high in late September — telling us that the bullish trend was weak, or what I called a “bearish divergence.”

In order for a rally to be considered strong and sustainable, we need to see the underlying components of the index also advancing. And that’s exactly what we have today… 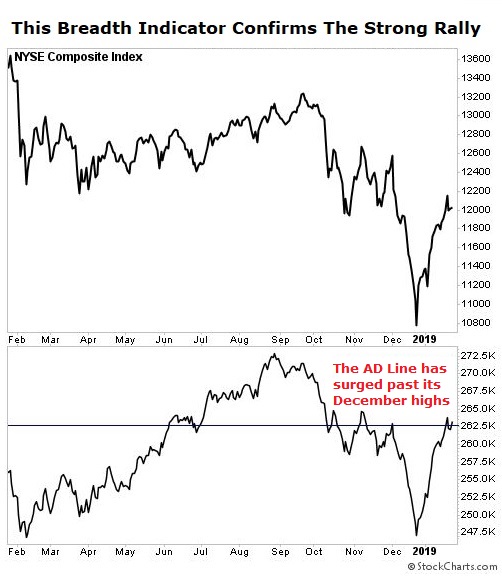 As you can see, the market’s robust rebound is confirmed by the breadth indicator below it. The AD Line has breached the December highs, while the market has yet to hit those highs, telling me that momentum in the near term is strong.

Indicator #2
Another indicator showing the tides may be turning is the Coppock Curve, which is flashing a “buy” signal.

This little-known momentum indicator was originally developed in 1962 by Edwin S. Coppock. While its calculation is cumbersome, it can be best understood as “a measurement of the market’s emotional state.” In other words, when investor sentiment begins to change, the Coppock Curve reverses course.

While some may use it as a sell signal, its real value comes at identifying market bottoms (it’s usually too early to signal market tops). Understanding the prime buying opportunities with this indicator is rather simple. Once it drops to “0”, the next upward reversal almost always signals a buying opportunity and the start of an uptrend.

As you can see in the chart below, it has identified every significant buying opportunity over the last decade. 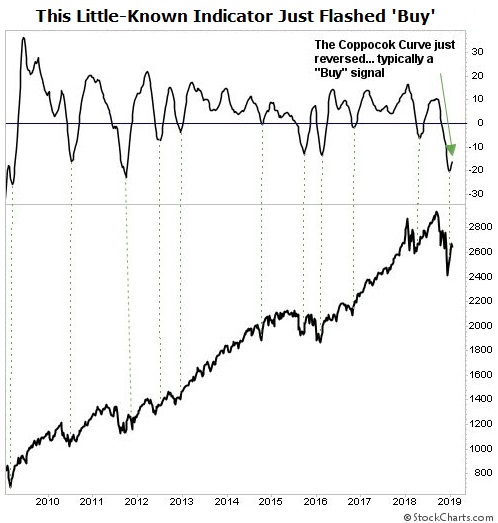 All Clear: Proceed With Caution
#-ad_banner-#These two bullish indicators, coupled with my system’s four new buys, tell me that there’s new life in this market and it’s time to rebuild our portfolio…

One thing to keep in mind is that we will proceed on a cautiously optimistic basis, meaning that there are a few wild cards that could quickly turn the tide, chiefly having to do with interest rates.

You may recall that in October, Fed Chair Powell indicated that the central bank was “a long way” from getting interest rates back to normal; at the time, this was interpreted as code for more rate hikes on the horizon.

Then the market proceeded to tank and the Fed quickly changed its tune, saying it would be patient and sensitive to risks in the market. The threat of rate hikes quickly diminished. For instance, as measured by the fed fund futures market, the probability of a rate hike at the March 20, 2019, Fed meeting was greater than 50% in November; today, that probability stands at just 5.6%.

A couple other things that I will be watching are the potential for another government shutdown and the trade war with China. Between the Fed, the government, and China, we have a few potential disruptors to watch out for. But for now, if you were wanting to know whether it’s time to dip your toes back in the water, the answer is yes.

How I’m Trading These Signs
My readers and I are doing that with new four buys for our Maximum Profit portfolio… two of which are former winners.

It’s pretty simple… See, over the years, I’ve found a way to “hack” the stock market. I’ve used it over, and over, and over again, and the chumps on Wall Street still haven’t caught wind yet. (Best of all, it’s perfectly legal.)

So, how did I figure this out, and why? I’ll show you everything right here…