Our #1 Pot Stock Is Winning Big-Time

It’s only been a little over three months since marijuana became legal in Canada, but the country’s government statistics agency has already added a relevant report to its monthly data set.

Statistics Canada, the national statistical office, now reports revenues generated by cannabis as part of its standard monthly retail sales report. And thanks to that addition, we learned on Jan. 23 that Canadians bought $41 million (U.S. dollars) of marijuana from retail stores in November, the first full month since the legalization became a fact of life.

If anything, this number is an understatement of the true market size for legal pot in Canada. Retail stores are still opening; Ontario, the country’s largest state, still hasn’t opened any retail stores (in this state, sales are still limited to online orders). Further, the demand was so strong that a number of stores ran out of product.

Canopy Growth: Best In The Business
In the three months since I first added Canada’s Canopy Growth Corp. (NYSE: CGC) to the our Fast-Track Millionaire portfolio, the stock has handily outperformed its closest peer, Tilray (Nasdaq: TLRY). While TILR has lost nearly 30% of its value over these three months, CGC has appreciated by more than a quarter. 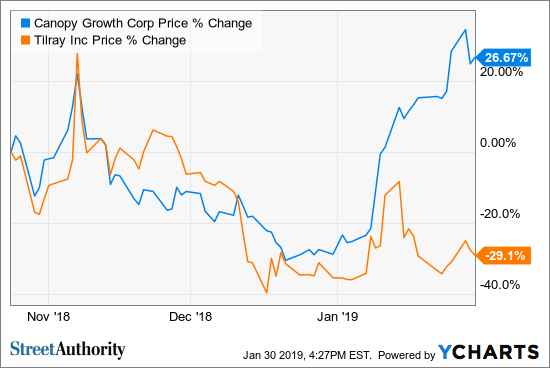 This year, too, the difference could not have been more striking: while CGC rallied by nearly 80% in January 2019, TLRY only added 10% or so to its share-price value. 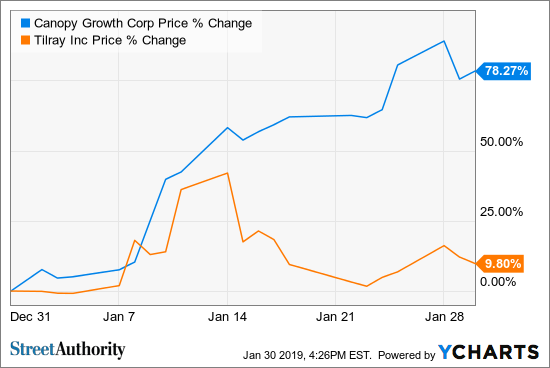 Constellation Brands’ conviction that its investment in marijuana is needed for its own future has been strong, too. First, Constellation acquired a smaller minority stake in Canopy, completed on March 31, 2018, for a 9.9% stake in Canopy Growth at a cost of about $191 million. Then last fall, Constellation invested another $3.8 billion.

#-ad_banner-#CGC’s future has become much more certain thanks to this strategic partnership (in fact, it was Constellation Brands’ vote of confidence in the company that convinced me it was relatively safe to invest in CGC). The production, marketing and distribution prowess of Constellation together with the developing market for cannabis-infused drinks should equate to a winning combination for years and decades to come.

And here’s another reason CGC jumped this year: the company’s entrance into the U.S. market.

Thanks to the passage late last year of the U.S. farm bill, which removed hemp and hemp derivatives from the Controlled Substances Act, Canopy recently received a hemp license in the state of New York. Moreover, the company said that it is planning to build an extraction and manufacturing facility in the state. Thanks to its expertise and its early entry into the U.S. market, plus the power of Constellation Brands’ distribution and marketing, CGC should be able to snare a large share of the U.S. hemp market and its medical marijuana market, too.

Looking Forward
If you’re an aggressive-minded investor looking for a long-term winner, then Canopy is definitely worth a further look.

The growth outlook for CGC remains very strong. In the 2019 fiscal year ending this Market 31, Canopy will likely end up with nearly $260 million in revenue, while sales are expected to nearly triple in the following year.

A word of caution to new investors, though: All pot stocks, including CGC, have been volatile in their short times as public companies. The industry is extremely young, and profitability remains remote. For instance, even though we are up by about 26% on the stock over at Fast-Track Millionaire, GCG is still lower by around 10% from its all-time high achieved on Oct. 15.

I’ll be following developments on this stock closely with my subscribers over at Fast-Track Millionaire. To follow along and also see our latest research, go here.