It may be frigid across much of the country, but corporate earnings growth remains quite steamy.

As of February 1, 230 members of the S&P 500 (46%) had posted fourth-quarter results. That means we’re about halfway through the reporting season. And thus far, nearly three-out-of-four companies beat expectations.

The torrid 20%-plus growth rate we’ve seen the past several quarters is finally beginning to moderate (that pace is unsustainable for long). Still, if you blend the actual results with the latest estimates from the other 270 companies that are due to report soon, S&P earnings are on track to increase 12.4%.

That would mark the fifth consecutive quarter of healthy double-digit profit growth.

A week earlier, the same methodology pointed toward a growth rate of 10.9%. That means we’ve had some big upside surprises in recent days — mostly in the energy sector. On average, the energy sector is beating consensus earnings expectations by 23%, versus 3.5% for the S&P 500.

In fact, this group is single-handedly propping up growth rates for the entire market.

As you can see from the chart below, it has been a disappointing quarter for utilities, whose earnings have slipped 5.2% from a year ago. Tech firms like Apple (Nasdaq: AAPL) haven’t exactly wowed the market either. But earnings in the energy sector have surged 96.3% — about eight times stronger than the overall market. 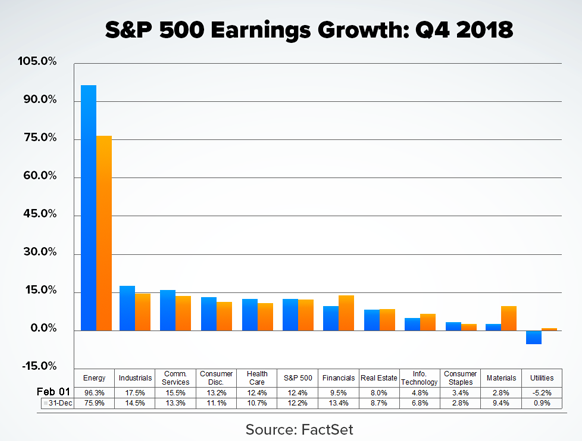 As a long-term investor, I don’t get too worked up about results over a short 90-day period. The market is always looking ahead, and the latest projections for next quarter show marked earnings deceleration for all eleven sectors (including energy). So, bear that in mind.

But these moving targets change daily. For now, the operating environment is certainly more constructive than it was just a couple months ago. And if the chart above says anything, it’s that oil and gas producers have come a long way over the past 12 months.

#-ad_banner-#Chevron (NYSE: CVX), for example, just posted a quarterly profit $2.06 per share, more than double the $0.73 it earned a year ago. As I write, shares of U.K giant BP (NYSE: BP) are enjoying the sharpest daily surge in more than three years thanks to bountiful fourth-quarter adjusted net income of $3.5 billion — which crushed expectations for $2.6 billion. For the year, profits jumped more than 100% to $12.7 billion.

This group is now churning out the strongest cash flows in years. Some of that is attributable to rising production levels. But these producers are also much leaner and more disciplined in their spending. They have also learned how to extract oil far more efficiently, dramatically lowering breakeven levels and boosting margins.

Take Occidental Petroleum (NYSE: OXY), a big player in the fertile Permian Basin of West Texas. The company is shrewdly allocating capital only to the highest-return projects. As a result, it can now generate enough cash flow to maintain dividends and keep production levels steady even with crude prices as low as $40 per barrel.

For a time, it looked as if that level might be tested. Benchmark West Texas Intermediate (WTI) oil prices collapsed by 40% last quarter, bottoming near $44 per barrel on Christmas Eve.

But we’ve seen a big reversal since then, fueled largely by deep OPEC production cuts and economic sanctions against Venezuela. Domestic crude prices have bounced more than 20% off their lows and are comfortably back above the $50 per barrel level. International Brent crude has jumped to near $65.

It was the strongest January for oil prices on record.

Just recently, BP hiked its quarterly dividend, lifting the yield to 6%. And I believe others will follow. Despite all this progress, the energy sector is still attractively valued following last year’s pummeling.

Let’s Look For Some High-Yielding Energy Funds
For those who want to add some exposure to their portfolio, I went out in search of a few solid contenders. Today’s screen isolates four well-rounded energy funds with low expenses, sizeable distributions and superior performance over the past three years.

​Keep in mind that this is just a screen. The securities in the table above haven’t been fully researched and shouldn’t necessarily be considered official portfolio recommendations. This screen is simply meant to uncover investment prospects that meet certain criteria.

When sorting through candidates, I stuck mainly to pure-plays focused on exploration and production (E&P) firms and integrated oil producers. There are other subsectors (refining and marketing, oilfield equipment, midstream pipelines) with promising outlooks, but those are best saved for another day.

Even then, that leaves quite a few choices. Don’t assume they are all created equal, even if their names sound similar. One might be a straightforward, cap-weighted index hugger, while another is a leveraged closed-end fund. When evaluating this group, pay close attention to portfolio composition, tax efficiency and other factors.

The Standout
All things considered, one of my favorites is Black Rock Energy & Resources (NYSE: BGR).

Launched in 2004, BGR has more than a decade of experience under its belt. The actively-managed fund has twin objectives of current income and capital appreciation, which are met by investing at least 80% of assets in energy-related stocks. For a reasonable 1.18% annual management fee, this fund provides access to a basket of thirty hand-picked stocks from across North America and the United Kingdom.

To boost payouts, the fund’s managers earn additional income by selling call options — a common practice among closed-end funds. Total returns have been solid over the past decade, landing in the top 1% of the category. And right now, BGR is trading at a wide 10% discount to its net asset value (NAV).

This could be a good entry point for long-term investors.

I may investigate BGR further as a possible candidate for my Daily Paycheck portfolio. But as with any official recommendation, my subscribers will be the first to hear about it.

In the meantime, feel free to research the names on this list further. But if you’d like to get access to my full portfolio — and put yourself on track to collecting a stream of dividend income each month, go here.