In the world of income investing, dividends reign supreme. Treasuries and CDs are offering historically low yields and are no longer considered the ultra-safe cash generators that they once were.

But did you know that there’s a little-known group of stocks that offer huge dividend payouts — but their yields are not displayed to the public on financial websites like Yahoo! Finance or Morningstar?

This phenomenon is due to a glitch in the way the financial media reports certain companies’ financial information.

I call this group of stocks “Hidden High Yielders.” And if you know where to look, you can find stocks yielding three, six, even seven times more than the yield posted on financial websites.

For Hidden High Yielders, the true payout is much higher because there are dozens of supplemental dividends that go unreported each quarter. But here’s the thing… this isn’t some secret way of transferring cash to a select group of well-connected insiders. These extra payments are dished out openly and uniformly to all shareholders. But these payouts are considered “special.” As such, these distributions aren’t reflected in the yields you see quoted on popular financial websites.

But trust me, the cash is just as green and spends just the same as any other dividend. And these special payments typically come in much bigger denominations, often 10-to-20 times larger than the firm’s regular quarterly dividend.

There’s no special trick or complicated system to capturing these dividends — you just have to know where to look.

For example, if you owned shares of Costco (Nasdaq: COST) back in November 2012, then you know exactly what I’m talking about.

At the time, the membership warehouse retailer had some accumulated profits that it wanted to return to investors. So it announced plans to hand out a special dividend of $3 billion, or $7 per share.

Investors were eager to line up for that cash payment. At the time, the stock had a normal dividend of $0.275 a share per quarter. So the special distribution of $7 was equivalent to disbursing the next 26 quarterly dividends all at once.

In other words, this single payout gave stockholders more cash in one day than they would have ordinarily received in six and a half years. (How would you like to get your next 26 paychecks advanced to you in one lump sum?)

The best part was this special payment didn’t replace investors’ ordinary dividends. They would still be coming just the same — this was an extra, one-time distribution.

But Costco wasn’t the only company in a giving mood. About that same time, casino resort owner Las Vegas Sands (NYSE: LVS) returned $2.4 billion ($2.75 per share) to its investors through a one-time cash payment. And department store owner Dillard’s (NYSE: DDS) got in on the act and decided to hand over $5 per share.

These were just three of 175 companies that made special dividend payments totaling $14.6 billion in November and December 2012. Granted, this was a period of unusually high activity. Dozens of companies were trying to beat the clock and avoid a possible dividend tax increase the following year. But even without that impetus, special dividends remain a popular way for companies to give a little something back — if you can call a few billion dollars “little.”

Where To Find Special Dividend Payers
Barely a day goes by where I don’t see at least one or two announcements of upcoming special payments. They don’t get much fanfare. Unless you know where to look, you probably wouldn’t even notice them.

But they are happening all the same. I keep a close eye on these announcements, and pass along the information to my High-Yield Investing subscribers each month.

Not every company that pays a special dividend will be a viable investment candidate. To be honest, some should be avoided.

But there are plenty of attractive, financially-sound businesses that have embraced this method of rewarding stockholders.

By definition, these distributions are usually random and sporadic. But there are a few known serial payers, as I refer to them, that have a stated policy of returning surplus earnings on a regular basis… often in the form of a year-end cash bonus.

Because operating conditions vary from year to year, the size of these payments will depend on the success of the business — the bigger the profit, the bigger the special dividend.

Considering ordinary dividend-payers have consistently outperformed the market for decades, it shouldn’t come as a surprise to hear that special payers (which go above and beyond) tend to produce superior returns. Many of the stocks I have tested have outrun the S&P 500 by a comfortable margin over the years.

In fact, I found 11 stocks that have paid special dividends for three or more consecutive years — the average was five years, and the most was eight years. I compiled these into an index and found something quite remarkable. Take a look for yourself… 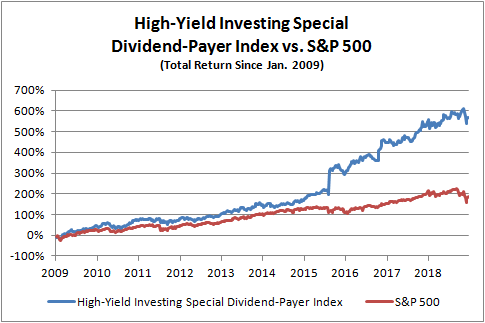 These long-term special dividend payers have returned nearly 600% since January 2009. That’s almost 400 percentage points better than the S&P 500 over the same time period.

Now, out of fairness to my High-Yield Investing subscribers, I cannot share with you the names of these stocks. But if the chart above is any guide, it clearly pays to keep track of these special dividend payers.

My advice: do some research and find stocks that have a well-documented track record of dishing out special dividends. It’s not a good reason alone to buy, but if the rest of the investment thesis checks out, you’ll be glad you did.