So Much For Doom And Gloom…

After a dismal fourth quarter, disheartened investors needed a snap-back rally… and they got it in spades: The S&P 500 rallied 15% from the market’s lows on December 24 through the end of January.

I think it would be fair to say that this is a far better result that many investors had expected. While the rally still wasn’t enough to recover all of 2018’s losses — the S&P 500 now trades just about 2% above its levels of the start of 2018 — this is truly a great showing.

January’s rally alone was one for the record books. It was the index’s best single-month performance since October 2015 and the best start of the year since January 1987.

But was the snap-back enough to restore investors’ trust in the market?

It should be. In fact, a rational investor shouldn’t have lost faith in the market to begin with. Especially if he or she has a strong-enough plan (like the one we have over at at Game-Changing Stocks) and a long-enough time horizon to execute it. 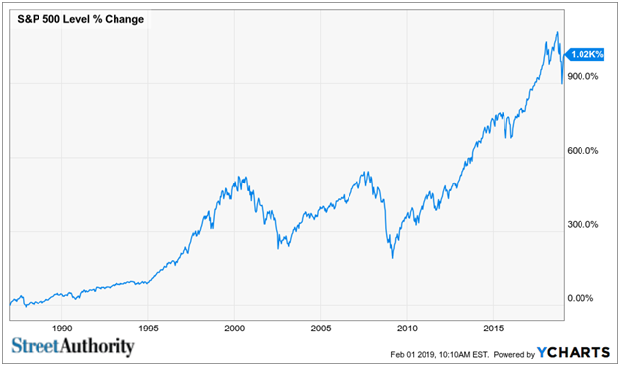 Just think back to 1987. Ronald Reagan was president, gas at the pump cost $0.90, inflation was 3.7%, and if you were on the market for a new home, a 30-year mortgage would likely cost you in excess of 9% a year in interest. Stocks were doing just fine.

The market was coming off a great year (18.7% return in 1986), and ultimately finished 1987 in the black, up 5.3% despite the infamous Black Monday crash on October 19 of that year, when the Dow plunged an astonishing 22.6% — a single-session record.

Now, let’s look at the chart above: The biggest mistakes you could have made as a long-term investor were (1) running to the sidelines (after the fateful October 1987 crash) and (2) taking your gains after the market’s strong run.

On the other hand, staying in the market has paid out big time for long-term investors: The S&P 500 is up more than 1,000% since then. Time is, after all, an investor’s best friend.

Time Is Your Friend
Over the long run, a group of market-cap weighted stocks benefits from the passage of time: As the economy grows, so do profits, and so does the market.

I don’t want to imply that investors must sit on their hands when they see dark clouds gathering or when their own circumstances change. And while there is nothing wrong with holding an index fund over a long period (see Exhibit A above), numerous investors — mutual funds, hedge funds, sovereign funds, pension plans, and individuals alike — continuously look for an edge over the market in a variety of so-called “active” strategies.

Our strategy over at Game-Changing Stocks is simple: we seek out both young and relatively mature companies whose new-to-the-market products and services are poised to outsell competition because they are better or because they serve a brand-new need — is one such active strategy that has legs.

But you don’t have to take my word for it. While past performance does not guarantee future results, the internal logic of our Game-Changing Stock strategies is strong, and our returns (both over the long term- and short term) speak for themselves, as well.

#-ad_banner-#Let’s take this recent snap-back rally as an example.

As the market bounced 16% off the recent lows, some of our long-term portfolio holdings rallied much more than that… Over that same period (December 24 through Feb 8), one holding was up 42.6%, another was up 57.2%, and still a third recommendation was up more than 39%, to name a few.

Granted, some of these stocks are coming off deep, multi-year lows. But they were still showing significant strength, as demonstrated by these returns, and their prospective recoveries are a likely indicator that these companies are in much better shape than what the markets had thought.

But what about our new positions? An integral part of our Game-Changing Stocks strategy is to continue investing in any market environment. I am proud to report that this has also worked out during the latest market sell-off — that is, if your barometer is a market-beating performance.

Looking at our fourth-quarter 2018 new picks onward, my latest picks outperformed the S&P 500 by 7.6% on average.

Why This Matters
It all adds up. There is no single secret to investment success. But a big reason why we were able to have this kind of success over at Game-Changing Stocks is simply because we stuck with it.

Any successful investment strategy will have time, patience, persistence, consistency, good research and, sometimes, a strong stomach as its integral components. And did I mention “research?” As some of you know, each year my team and I release a report with big, bold predictions for the coming year. Some of them are controversial — but they all have triple-digit-plus potential for investors as in 2019 and beyond.

If you want to kick start the year with some of the best research you’ll find on the market’s biggest growth opportunities, you’ll find it all in my latest report: 9 Game-Changing Investment Predictions for 2019.