The Bull Market Rages On. Now What?

With the tenth anniversary of this bull market upon us, investors have a lot to celebrate. Stocks are up, profits are growing, the economy is chugging along, the interest rate environment is relatively benign, and even on the trade-war front we are seeing some positive expectations lately.

There’s nothing more bullish than a bull market. If this saying is even half-correct, the best indication we investors have that the market strength will continue is the powerful market rebound off the latest lows in December 2018. 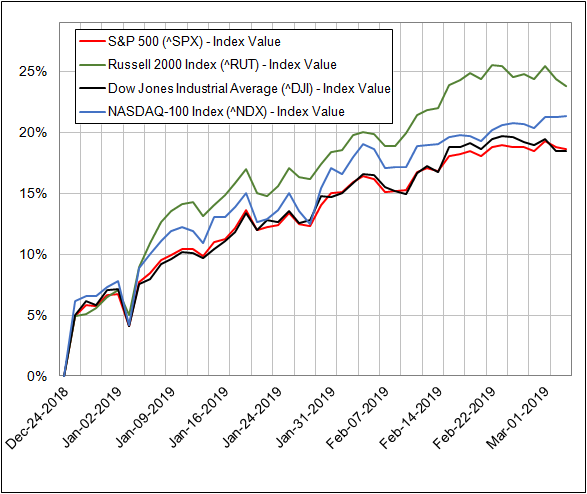 From the market’s low on Christmas Eve, all the major U.S. indices rallied quite strongly. Here’s the grand total…

#-ad_banner-#Not counting dividends, the Dow Jones Industrial Average advanced 18.4%, falling slightly behind the S&P 500’s 18.7% return. Not to be outdone, the Russell 2000 index of small-cap stocks has been leading the rebound with its 23.8% return as of March 5. The tech-heavy Nasdaq 100 has also done very well, with a 21.3% return over these two and a half months.

I’m happy to report that our portfolio over at Game-Changing Stocks has done quite well, too. On average, our stocks have left all the major market indices in the dust: the average come-back return of more than 44% is more than double the same-period returns of the S&P 500 and the Nasdaq 100, and is more than 20 percentage points higher than the return of Russell 2000.

Remarkably, too, the market rebound off the December lows has seen very few “down” days. This does not have to mean that the gains of this magnitude will continue, nor does it guarantee a positive market going forward, but for any investor who suffered market-related losses during the fourth quarter of 2018, the strength of this performance has surely provided at least some relief.

Looking Forward
If the past is indeed prologue, the market could be entering dangerous territory, despite the rally — or perhaps because of it. But this is nothing new to most rational investors, who have long been assessing market risks and questioning whether or not the gains will hold.

While I think that this market is more likely to move higher than lower from its current levels, its next move is not set in stone and it will surely depend on more than one variable. The unknowns include the outlooks for economic growth both here in the United States and around the world.

For the latter, we have not been getting much in terms of good news lately. On March 6, the Paris-based Organization for Economic Cooperation and Development (OECD) warned that the global economy, led by Europe, is slowing, thanks to trade tensions and political uncertainty stemming, for example, from Brexit. The U.S. outlook was lowered, but slightly, while the forecast for 2019 economic growth in the U.K. was slashed to 0.8% from 1.4%. Similarly, for Germany the growth forecast was cut to 0.7% from 1.6%.

Here’s just one data point for you: the Institute of Supply Management said its February ISM Non-Manufacturing Index — a widely watched measure of economic activity — indicated expansion for the 109th-consecutive month. At 59.7 (any reading above 50 indicates expansion), the February reading was three percentage points higher than the January’s 56.7. It was also significantly higher than the consensus expectation of 57.4, and just marginally lower than the cycle high of 60.8 (set in September 2018).

Action To Take
With the market accounting for slowing world-wide growth, still-cheap money, and still-strong corporate profits, it’s rational to expect more volatility. But this should not prevent us from benefitting from the market’s likely positive direction or from investing in the best-positioned and best-valued stocks.

I have faith in what we’ve been doing in Game-Changing Stocks. One strategy we’ve followed lately has been to take some gains off the table while constantly looking for new opportunities, regardless of the prevailing market conditions.

For investors nervous about when the next leg down in the market is going to be, this might be an opportune time to do what we’ve done — take a few gains as well as let some of the losers go.

P.S. If you’re looking for the best possible ideas to put your money to work in 2019, then I have good news for you…

Each year my team and I release a report with big, bold predictions for the coming year. Some of them are controversial — but they all have triple-digit-plus potential for investors as we head into 2019. You can find it all in my latest report: 9 Game-Changing Investment Predictions for 2019.