How To Become A Digital Landlord

Have you ever looked at the portfolio composition of popular equity-income funds such as Vanguard Dividend Appreciation (NYSE: VIG)? The low-cost exchange-traded fund (ETF) was built to give investors access to a broad basket of 200 dividend-paying stocks.

It has done a respectable job, delivering total returns of 10.2% annually over the past five years, better than most category peers. But the fund isn’t nearly as diverse as you might expect. More than 70% of assets are sunk into just three sectors: industrials, consumer services and consumer goods.

I can relate. A good chunk of my High-Yield Investing portfolio is devoted to midstream energy MLPs, real estate trusts, and infrastructure firms.

That’s no accident. These companies own durable assets that generate steady, predictable cash flows. They also offer some of the most generous yields around, with lofty payouts of 6% to 8% or more. So naturally, I do a lot of fishing in these waters. And I won’t complain about long-term returns of 108%, 207%, 421%, and more.

Still, too much concentration can be dangerous. And there’s a lot of ground to cover out there.

One area conspicuously missing exposure in my High-Yield Investing portfolio right now is technology. I have recommended a few in names the past, most recently chipmaker Qualcomm (Nasdaq: QCOM), which was sold last August for a 32.5% gain in just four months. But aside from that, this sector has been under-represented.

Of course, the tech group isn’t exactly known for dividends. While some like Apple (Nasdaq: AAPL) are helping to change that perception, you won’t find many tech stocks with 3%-plus yields.

So, is it possible to hitch your portfolio to one of the most explosive corners of the market and still rake in lofty yields twice the market average? Turns out there is a way — in the intersection of real estate and cloud computing.

It’s A Big Data World
The world revolves around data, doesn’t it?

I just got a whopper of a home internet bill from AT&T. It seems we went over our allotted 150 monthly gigabytes of data usage. For perspective, that’s enough to download 1,000 MP3 songs, watch 1,000 YouTube videos, browse 10,000 web pages or watch 25 high-definition movies. Yet, we needed more — which AT&T is happy to provide, in 50-gig increments for $10 each. Our overage fee for February was $80. As in 400 gigabytes above and beyond the standard plan. That’s a lot of video games and Netflix movie streaming.

#-ad_banner-#According to cellphone maker Ericsson, mobile data traffic has soared by nearly 80% over the past year. And with 5G service on the horizon (supporting blazing-fast download speeds 100 times faster than 4G), it’s expected to surge another five-fold by 2024.

Snap your fingers. In that brief instant, more data flowed around the world than was sent in an entire year back in the mid-90s. And by 2022, global internet traffic will have soared to 150,000 GB per second.
Cisco has compiled all kinds of dizzying projections on data usage over the next three years.

For instance, the number of internet-connected devices will rise to 28 billion by 2022 — more than three times the Earth’s population. Mobile traffic will grow twice as fast as that from fixed devices (46% annually to 23%). Gaming traffic will rise 55% annually (nine-fold overall), while virtual reality traffic will spike 65% per year (or 12-fold).

There are multiple trends fueling this growth. One is the cord-cutting phenomenon, where viewers are canceling cable or satellite service in droves and watching television over the internet instead. Another is the proliferation of internet-connected devices — the internet of things (IoT) — such as smart utility meters and front door video surveillance systems.

Cisco is forecasting annual global internet traffic to reach an astronomical 4.8 zettabytes by 2022. A zettabyte is a trillion gigabytes or one sextillion bytes.

As you might imagine, it takes considerable infrastructure to make all this possible. And that means opportunity for investors.

How We’re Investing
Today, I want to home in on data centers. Racks upon racks of servers and other hardware take up a lot of floor space. They also draw exorbitant power and need cool environments to keep from overheating. Most IT departments have found that instead of keeping all this equipment in-house, it makes financial sense to rent space in a dedicated facility.

Numerous renters typically occupy a single building known as a colocation center (or “carrier hotel”). There are plenty of interested parties ranging from tiny website hosting companies and online retailers to colossal data storage providers and telecoms. Some of the biggest users include content distributors such as Disney (NYSE: DIS) and Netflix (Nasdaq: NFLX), as well as cloud companies like Amazon (Nasdaq: AMZN), Microsoft (Nasdaq: MSFT), and IBM (NYSE: IBM).

Once the hardware has been installed on these campuses, renters are reluctant to move — and not just because of the hassle and expense. They often make connections with neighbors. Furthermore, every minute of website downtime can mean millions in lost revenues, so companies are reluctant to do anything that could disrupt network availability.

That switching cost can be a powerful competitive advantage for incumbent leaders.

Needless to say, renters want full assurance that their data and mission-critical operations are protected. These data centers have redundant backup power generators, advanced fire protection systems and other safeguards. Many are also equipped with biometric scanners and other security systems. Shared infrastructure means lower costs for renters. And there are other advantages… reduced IT staffing, ample bandwidth, ultra-high reliability up to 99.9999% (downtime measured in minutes per year).

Demand for data-center space has grown at a rapid clip around the globe, fueling strong returns for the companies that own these specialized properties. Equinix (Nasdaq: EQIX) is the largest provider, with facilities in 50 markets across five continents where thousands of internet companies interconnect with each other and their end users. The company has an unrivaled track record of 61 consecutive quarters of revenue growth. One look at the stock chart below will tell you plenty about industry fundamentals. EQIX has posted average returns of 26% annually over the past decade, crushing the S&P 500. 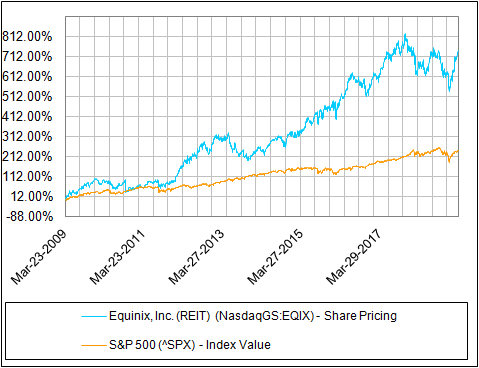 ​It’s not alone. Digital Realty Trust (NYSE: DLR), another popular option for investors in this space, has delivered a market-beating return of 380% over the past decade.

Now, either one of the stocks I’ve already mentioned are worthy of consideration for investors. But I’ve got my eye on another player that is better suited for me and my subscribers over at High-Yield Investing…

The company has seen robust demand for its data centers — with dividend growth to match. Since 2011, the distribution has been growing better than 30% per year. But to learn the name and ticker symbol of this pick, you’ll have to sign up for my newsletter. If you’d like to get access to my full research on this pick as well as the rest of my portfolio, simply go here now.