There’s always a fascination with low-priced small-cap stocks. Maybe it’s the “venture capital-like” approach that it brings, or maybe it’s the dream of getting in on the ground floor of the next Facebook (Nasdaq: FB) or Amazon (Nasdaq: AMZN).

Whatever the case might be, there’s no denying that small-cap stocks can provide investors with astronomical returns. You’re more likely to see a small-cap stock with strong growth prospects return triple digits in a year than you are a blue-chip stock.

That’s why I decided it would be fun to fire up my Maximum Profit system and scan the market for small-cap stocks (market cap under $2 billion) with share prices under $10. I also wanted to make sure we weren’t getting thinly-traded stocks, or those with low volume, so I made sure that at least 75,000 shares change hands on average daily.

Using a proven system like Maximum Profit to scan for stocks like this is much more efficient than a dart-throwing approach that most investors are likely to take. After all, we’re using two proven metrics — one fundamental, one technical — to objectively “score” every single stock in the market. By doing this, we’ve been able to essentially “hack” the market and make gains of 135%, 181%, 242%, and more — all in a matter of months.

If we take that approach and narrow it exclusively to small-cap stocks, then we could potentially find some stocks before they go on to deliver some explosive gains…

After I applied the Maximum Profit system to the criteria mentioned above, I found that only eight stocks made it through the screen. One was a current holding in our portfolio already, so I didn’t include that one in the final list out of fairness to my existing premium subscribers. That leaves us with these seven: 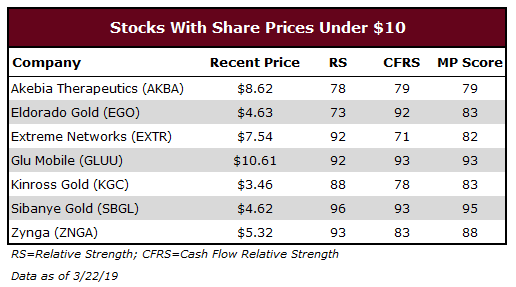 Here’s a little information on each of the companies in the screen. Three of the seven stocks are gold-related companies, so I’ll start there…

1. Eldorado Gold (NYSE: EGO) is a Canadian-based gold mining company with properties in Turkey, Greece, Brazil, Serbia, Canada and Romania. The company’s market cap is $964 million, and it generated sales of $459 million in 2018, which was a 17% increase over 2017.

#-ad_banner-#​2. Next up is another Canadian miner, Kinross Gold (NYSE: KGC). This gold and silver miner has properties in the United States, Russia, Brazil, Chile, Ghana, and Mauritania. It has proven and probable reserves of roughly 25.5 million ounces of gold and 53.9 ounces of silver. In 2018 it had sales of just over $3.2 billion, 3% lower than the previous year.

3. The last of the miners is Sibanye Gold (NYSE: SBGL). This company is based in South Africa and operates precious metals mining companies in South Africa, Zimbabwe, and the United States. The company has gold, platinum, palladium, and rhodium operations and projects. It also produces by-products such as iridium, ruthenium, nickel, copper, and chrome. The company is coming off a few strong years of sales growth: from $1.6 billion to over $3.5 billion in the last three years.

4. Akebia Therapeutics (Nasdaq: AKBA) is a biopharmaceutical company that focuses on developing and commercializing novel therapeutics for patients with renal disease. Its lead product candidate is vadadustat, an oral therapy that’s in Phase III of the three-stage FDA approval process. Vadadustat is an oral therapy for the treatment of anemia due to chronic kidney disease.

The company is still in its infancy but generated sales of about $208 million in 2018, a 16.7% growth over the prior year. The company hasn’t turned a profit yet but does have a solid balance sheet with zero debt and $390 million in cash on hand.

5. Extreme Networks (Nasdaq: EXTR) is a former Maximum Profit holding. We added the communications equipment company to our Small-Cap portfolio in March 2017 and booked a 43.6% gain on the trade in just over four months.

6. Glu Mobile (Nasdaq: GLUU) develops, publishes and markets a portfolio of free-to-play mobile games for smartphones and tablet devices. It primarily publishes titles in four genres, including home décor, sports and action, fashion and celebrity, and time management. Some of its titled games are Contract Killer, Blood & Glory, Cooking Dash, Deer Hunter, QuizUp, and Tap Sports. The company pulled in $366 million in sales in 2018, a 28% increase over the previous year.

7. Zynga (Nasdaq: ZNGA) develops, markets, and operates social games as live services in the United States and internationally. The company’s games are played on mobile platforms, as well as social networking sites such as Facebook. For example, one of its more popular games was FarmVille, but it also has Zynga Poker, Words With Friends, CSR Racing 2, and Empires & Puzzles. In 2018, the company generated $861 million in sales, a 16% jump over the previous year.

Action To Take
Keep in mind that the investing ideas I present here are intended to provide a starting point for further research, not a final recommendation. That said, my Maximum Profit subscribers shouldn’t be surprised if we see one or more of these stocks in our portfolio at some point.

In the meantime, if you’d like to “hack” the market and earn bigger gains in less time (while avoiding catastrophic losses) in your portfolio like we do over at Maximum Profit, then go here to learn more…