What’s better than a game-changer that capitalizes on a growth opportunity?

Answer: a game-changer that capitalizes on more than one growth opportunity.

This is how Advanced Micro Devices (Nasdaq: AMD) looks like these days. The company has built a sustainable business… a business that doesn’t just depend on strong demand from one particular sector or industry — but rather is set to grow and conquer new markets.

In many ways, the chipmaker just might be the perfect game-changer. It’s no wonder then, that we own it in the portfolio of my premium newsletter, Game-Changing Stocks. In fact, we’re up more than 92% on the stock in just under 18 months.

Today, I want to walk you through some of the moves AMD has made recently that illustrate this point — and why it’s still a good option for investors today.

What Makes AMD A Game-Changer
Starting a few years back, AMD began riding the crypto-currency wave. As worldwide demand for crypto-currencies such as bitcoin jumped, AMD was ready to supply the computer processing power needed to “mine” this novel source of wealth creation.

AMD took full advantage, utilizing the cyber-currency boom by building a better-diversified and stronger business than it had before: both in 2017 and 2018, the company grew its revenue by 20%, expanded margins and increased operating profit. That’s despite the fact that said boom was followed by a bust… The price of bitcoin, the bellwether of digital currencies, crashed from a bubble-like high of nearly $20,000 in December 2017 to a low of just over $3,000 a year later. (Just recently, bitcoin traded above $4,000 for the first time since early January.)

How did AMD continue to do well despite the digital-currencies crash?

AMD’s strategy is all about high-performance products. The company’s latest offerings were simply better than the competition’s and, as a result, have gained market share within their respective sectors. AMD estimates that in 2018 it scored a four-percentage-point gain in market share with Ryzen, a series of PC processors, largely at the expense of Intel (Nasdaq: INTC). And on top of the growing market share, AMD increased the average selling price for this product line.

This is how it works when you have a superior product.

Even more promise is expected from EPYC, a line of products for data-centers, which is currently also dominated by Intel. AMD is clearly not letting Intel rest on its laurels here. With the data center continuing to be a key focus for the company, even a small market-share grab will translate into large revenue growth and profit potential.

Even though AMD’s share price has taken my Game-Changing Stocks readers and I on a rollercoaster ride this past year, this “David” is outperforming Goliaths Intel and NVIDIA (Nasdaq: NVDA). Over the past 52 weeks, for instance, AMD is up more than 127%. This compares with a 6.7% gain for INTC, a 27% loss for NVDA and a 4.4% increase in the S&P 500.

Let’s also consider the last five months or so, when I upgraded AMD from a “Hold” to a “Buy” until now. That turned out to be a good call.

As you can see from the chart below, AMD crushed the competition here, too. It’s outperformed peers Intel and NVDA, as well as the overall market. 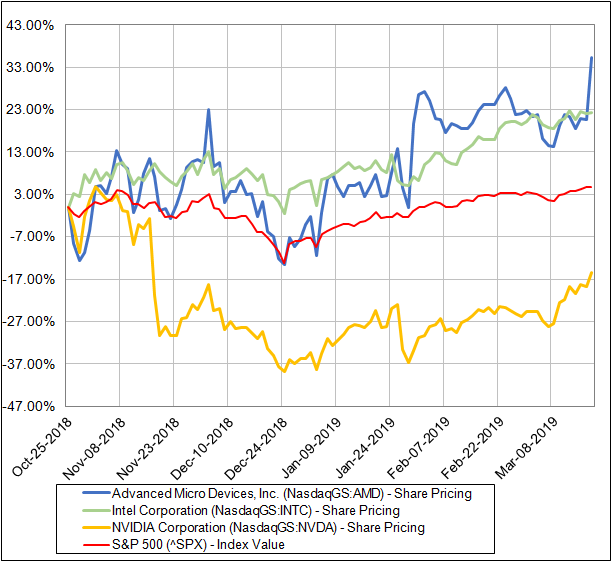 Interestingly enough, up until just recently, shares of AMD and Intel were running neck and neck — reflecting both the general market and the semiconductor sector recovery.

#-ad_banner-#That is, until Tuesday, March 19, when AMD rallied by more than 11% on trading volume that was more than three and a half times the average.

What caused this spike? Well, it’s yet another example of AMD continuing to innovate and enter new markets.

On that day, it was reported that Alphabet’s Google (Nasdaq: GOOGL) is partnering with AMD on in its new cloud-based gaming server.

I sent my readers a special alert email about this new venture on the day the news broke, letting them know that I’m keeping my “Strong Buy” recommendation on the stock. That’s because this venture — a cloud-based game server, run by Google — is a major new development in the very large computer game industry (in the United States, it rivals the size of the entire movie industry, as measured by sales.)
Google’s Stadia, a gaming platform running entirely on the cloud (and for which no installation and no special gaming console or high-end computer will be required), will be running on a custom AMD chip when it launches later this year.

Many previous attempts by other industry players to start a streaming cloud-based game service have fizzled — it’s not easy to create a seamless experience for gamers who are used to advanced graphics and instant controls. But Google’s venture has many features that can make it a success, including the AMD chip and its ownership of YouTube (which will be incorporated into Stadia), not to mention support from the developer community.

This could be THE game-changer for this huge and growing industry — and AMD will play a major role.

Action To Take
As I mentioned previously, this led me to reiterate my “Strong Buy” recommendation for AMD in Game-Changing Stocks. It’s a perfect example of a company that is firing on all cylinders — a true “game-changer” in every sense of the word. It’s no surprise then, that while my subscribers and I have nearly doubled our money on this stock, I think we’ll see plenty more gains to come.

P.S. If you want more picks like this, then I have good news for you… Each year my team and I release a report with big, bold predictions for the coming year. Some of them may seem a little “crazy” or controversial — but if our track record is any indicator, they all have triple-digit-plus potential for investors in 2019 and beyond. You can learn more in my latest report: 9 Game-Changing Investment Predictions for 2019.