The Greatest Investor You’ve Never Heard Of… What’s His Secret?

One of the hardest parts of investing (and there are many) is patience.

It’s all too easy to get caught up in the short-term swings of our holdings. But in times like these, we must remind ourselves that there will always be another deal. Don’t jump into an investment because you’re being pressured into it or think this is your only opportunity. If you don’t feel comfortable or haven’t done your due diligence, take a step back and take a fresh approach.

Think of the patience that Warren Buffett has exercised over the years. Over his lifetime, the Oracle of Omaha has seen his fair share of market plunges and losses. When Kraft-Heinz (Nasdaq: KHC) tanked in late February 2018, for example, his company, Berkshire Hathaway (NYSE: BRK), lost about $4.3 billion… in a single day. Yet, Buffett remains steadfast in his investments. He knows that when he purchases a wonderful company, he can hold onto it “forever.”

As I’ve mentioned before, it doesn’t take a genius to learn from Buffett. All it takes is the willingness to pay attention to his wisdom, and then to act on it. He’s clearly laid out his investment philosophy in his shareholder letters: buy great companies at fair prices and let compounding (and American ingenuity) go to work for you.

His investment guidelines are so simple, yet it’s been difficult for others to replicate them. When we hear his investing philosophies and advice, we tend to shrug it off. It’s been repeated so many times that it’s lost its allure.

But one regular individual is living, walking proof that Buffett’s simplistic approach to investing works. In fact, it’s helped this gentleman become a self-made billionaire…

You’ve likely never heard of Herb Wertheim. But he’s a self-made billionaire with a net worth of roughly $4.2 billion. His story reminds us that regular folks with patience and discipline can generate Buffett-like results.

Wertheim’s secrets? Simple: Buy quality companies with good management; add to the position if the stock price drops, and hold for the long term to capture the magic of compounding.

Forbes published an excellent article on Wertheim back in 2019, which you can read here.

Keep in mind, the numbers are a little different now (because as Wertheim has grown older, he’s even more wealthy). But here’s an excerpt…

Wertheim, 79, has no need for early-bird specials. What the photos don’t reveal is that Dr. Herbie, as he is known to friends, is a self-made billionaire worth $2.3 billion by Forbes’ reckoning—not including the $100 million he has donated to Florida’s public universities. His fortune comes not from some flash of entrepreneurial brilliance or dogged devotion to career, but from a lifetime of prudent do-it-yourself buy-and-hold investing.

Herb Wertheim may be the greatest individual investor the world has never heard of, and he has the Fidelity statements to prove it. Leafing through printouts he has brought to a meeting, you can see hundreds of millions of dollars in stocks like Apple and Microsoft, purchased decades ago during their IPOs. An $800 million-plus position in Heico, a $1.8 billion (revenue) airplane-parts manufacturer, dates to 1992. There are dozens of other holdings, ranging from GE and Google to BP and Bank of America. If there’s a common theme to Wertheim’s investing, it’s a preference for industry and technology companies and dividend payers. His financial success—and the fantastic life his portfolio has afforded his family—is a testament to the power of compounding as well as to the resilience of American innovation over the half-century.

We Can Replicate This Success

Pretty amazing stuff. And while Wertheim may be a more extreme example, the simplicity of his approach is something we can all mimic. In fact, some of the best investments in my Capital Wealth Letter premium service have come from well-known, profitable companies that generate enormous amounts of cash flow. We’ve picked many of these stocks up at reasonable prices and have done well.

For example, back in 2016, we scooped up shares of American Express (NYSE: AXP). The the stock sold off on news of its breakup with Costco (Nasdaq: COST). Shares were trading at a 16% discount on a price-to-earnings basis compared to its historical five-year average, and only seven times cash earnings (as measured by its earnings before interest, taxes, depreciation and amortization, or EBITDA).

To put it simply, we saw a great company, with a great brand, that gushes cash flow, and we bought shares at a great price. Sure, there was a disappointing development, but we were confident the market would shrug off the news eventually. In fact, this made it a great time to buy.

That’s exactly how it has played out, too. Since then we’re up 212%, compared to the S&P 500’s 109%. Not only that, but it also held up much better during the coronavirus-related selloff. 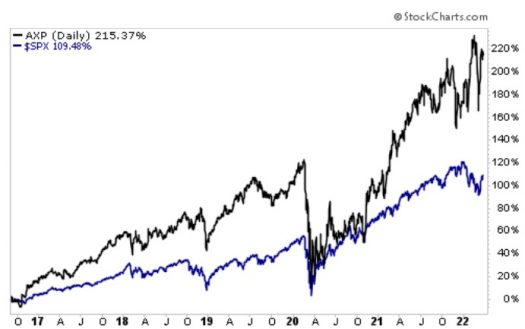 The point is, investing doesn’t have to be complicated. So don’t make it complicated. Sometimes the best investments are the obvious ones. Sure, you can get cute and take a flyer on some hyped-up IPO or fly-by-night small cap, which makes for fun talk at your backyard BBQs. But the odds are that’s all it will provide you.

Simply find great companies, buy them at fair prices, and remain patient. It pays off. In fact, times of crisis (like the Covid-19 pandemic, for example) are some of the best times to strike.

P.S. My colleague Nathan Slaughter just released a brand new report detailing the “feeding frenzy” of takeovers that are about to take place in the coming months…

Companies are flush with cash and hungry for growth. And according to Nathan, this could lead to a major wave of merger and acquisition activity in the coming months…

Nathan and his team have identified three red-hot sectors for the coming boom, including picks for investors to target. If even just a rumor of a takeover leaks out, investors could make triple-digit gains, practically overnight. So you’ll want to act fast before the crowd catches on…